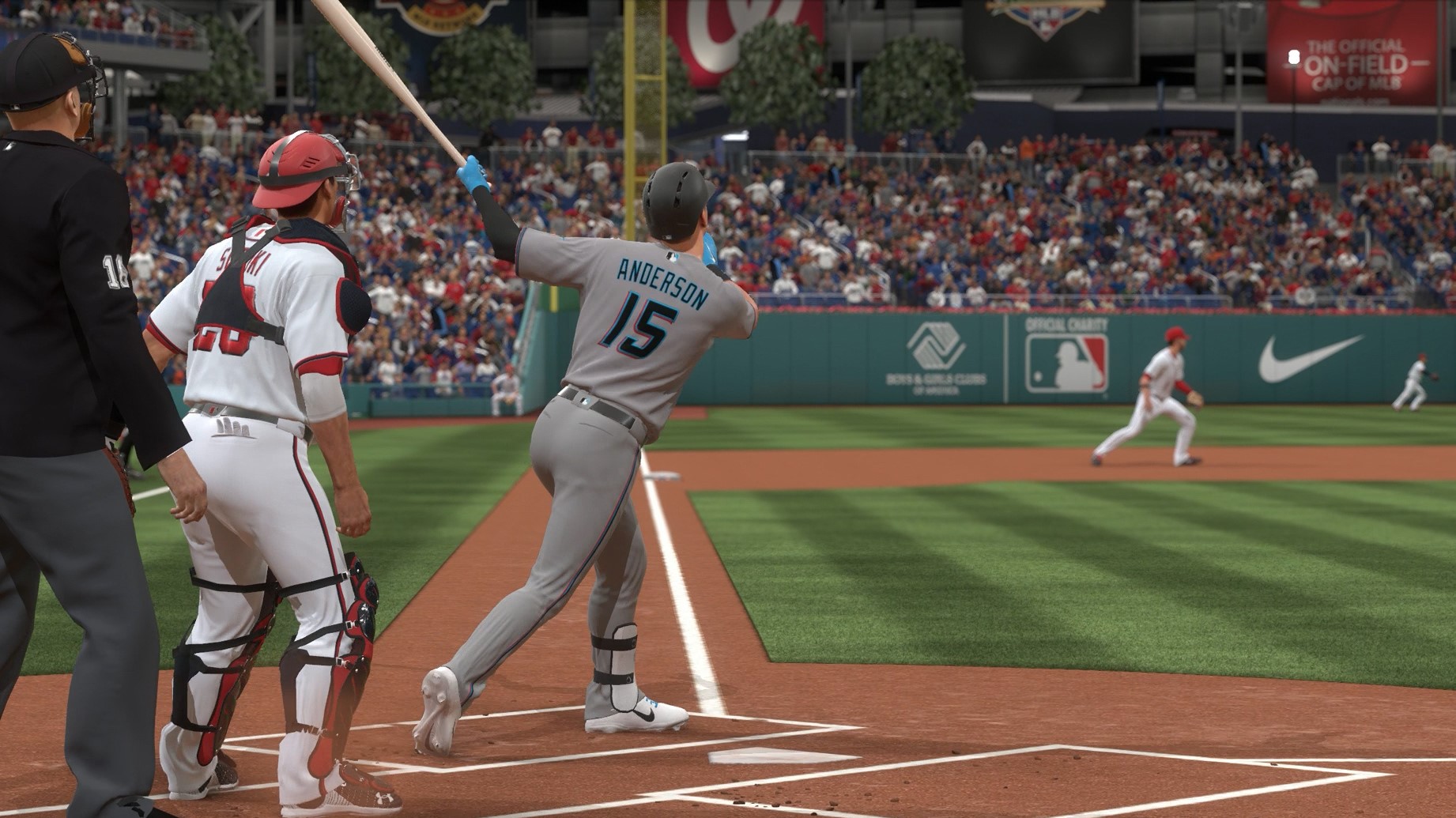 With the Philadelphia Phillies wrapped up, we finish up the NL East with the Miami Marlins. The Marlins home run swings are not very hard to go through because there’s simply not that many to cover. The Marlins are weak in the talent department right now, and that is true for their power hitting as well. That being said, I still have three players to cover here, and so let’s start with Brian Anderson.

Analysis: I’m not sure how much here is actually signature to Brian Anderson in the MLB The Show 20 version. His stance is slightly open, so the setup looks mostly fine, but it breaks down once the load begins. His leg kick is much too pronounced, and his follow through on the swing itself is two-handed in real life but one-handed in the game. Overall, he just has too much torque on his swing in The Show as Anderson has a much more compact swing in real life.

Anderson hit 20 home runs last year, so I wouldn’t be surprised if this just isn’t captured one-to-one as of yet, but there’s not many other Marlins who would be worth giving signature details to next season if SDS does go that route.

Analysis: Dickerson needs a little more fluidity to his stance as he’s waiting for a pitch. He bounces a bit more on that front foot and has more bat waggle going on than he does in MLB The Show 20. The leg kick look good, and the follow through is mostly quality as well. Dickerson spins both his feet through the dirt a bit when he launches a ball into the stratosphere, and that’s somewhat well represented in The Show. Dickerson’s left arm will follow the ball and either go straight or point towards where he just launched the ball, and that’s mostly here as well. The one main issue with the follow through is that Dickerson will more wrap the bat around his head than let it fly behind his body.

With the celebration, you can’t quite see it clearly in The Show clip, but basically Dickerson taps one shoulder and then the other. This celebration is not tied to him anymore because he doesn’t do it, but I just wanted to show it off because it’s in the game. Regardless, The Show is correct to not be using it for him anymore so nice work there by the developers.

Analysis: Jesus Aguilar is a bit of a tricky player to mimic, but SDS does get the short leg kick right. From there, it’s still pretty good, but Aguilar has too little extension on his swing in The Show and wraps his hands around his head more than extending the arms and following through to the shoulder before coming back to neutral.

After that, the celebration is a little hard to get perfect based on the general animation system The Show uses. They do have Aguilar doing a sign of the cross, which is right, but in real life Aguilar generally does it as he rounds third and then high fives the third-base coach before pointing to the sky. He then points to the sky again and then pounds his fists together all before getting to home plate. I think what The Show has more or less gets the job done, but obviously it’s not perfect.

Jorge Alfaro and Jonathan Villar were the only two I felt maybe I should include, but a cursory glance made me think they were mostly generic in The Show — and I already covered someone who I think was mostly generic in Brian Anderson. Someone like Garrett Cooper was another “maybe” player, but he just did not get enough at-bats last year.

Next up will be the NL Central, and that will start with the Chicago Cubs. Thanks for scoping these out y’all, hope you’ve enjoyed them as much as I’ve enjoyed making them so far.