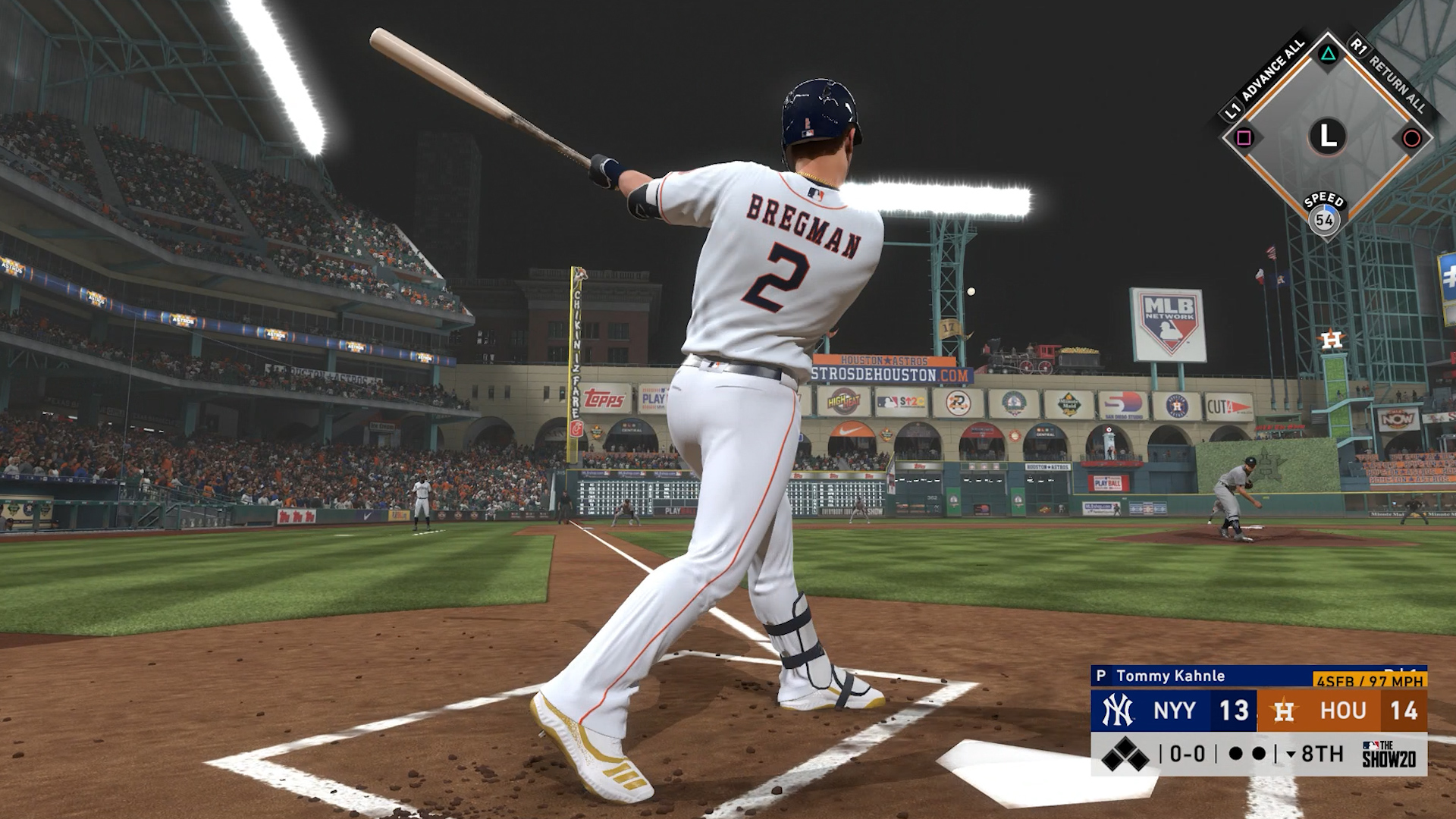 Following up on the Oakland Athletics, we have just two teams left to cover in this series. Today, we’ll be covering the Houston Astros. The Astros home run swings have some heft to them as there’s lots of swings and celebrations to cover. Let’s get to it.

Analysis: The swing and follow through for Bregman is perfect. It’s a really well done re-creation because it even has him switching the bat to his other hand before dropping it. He also looks to his dugout coming out of the box and that’s a great touch as well. As he’s coming around third, Bregman also does the jumping low five, which is on point (I don’t have it in my Show clip due to time constraints but it’s there in-game).

The only real problem here is an omission. Bregman does have a custom celebration at home plate, but his point to the sky is not even something he does that often. What’s missing is his four fingers celebration/taunt in the dugout. It’s his way of saying the pitcher could have intentionally walked him. The Show could have added this since there is a much bigger focus on dugout celebrations this year, but it is not here.

Analysis: Correa could have a little more knee bend and his stance could be a little more open. From there, everything else works out well as the leg kick and follow through both look true to life. The only other issue I had is one I have had with a fewer other players where I could not get Correa’s celebration to trigger at home plate. I also don’t know how accurate the celebration even is these days as Correa seems to do a more tame point to the sky than the one in the edit menu of The Show.

Analysis: About the only real fault I can see here is Springer’s stance is more open in The Show than it is in real life. But after that, the swing looks good. Springer has a little more swag on his bat flip than real-life Springer usually has, but it works since even the bat flip still quickly gets him out of the box, which is the right thing to do.

The celebration is accurate as well. Springer will give that thumb and pinky celebration with either one or two hands just about every time after crossing home plate, and that’s true to form here in The Show.

Analysis: The Show has really been cruising along here with the re-creations and that continues with Alvarez. I would say the only complaint is his arms could bend a little more on the follow through before he snaps the bat more back to neutral, but that’s very minor. SDS also usually has trouble nailing how a player comes up on his heel on the follow through, but they get it right for Alvarez.

Yordan technically has a custom celebration in the edit menu, but I think it’s bugged or just an error since there’s nothing really to it. I’m not going to hold it against the grade one way or another because he doesn’t really have a signature celebration in real life, so I’m just noting it here for accuracy.

Analysis: Let the good times continue to roll with Gurriel. This is another somewhat tricky player to mimic, but SDS gets it right. The only real complaint is with the initial stance. Yuli could stand to get his elbow more flared out, and he could use a little more bend to his body to get him over home plate. From there, he spins on his heels and really twists his body into a bit of a pretzel during the follow through of his swing.

Analysis: Altuve’s issues are relatively minor here. The biggest complaint is with the leg kick and where Altuve’s foot ends up after the leg kick. He does close down his stance in The Show after dropping the lead foot, but he needs to close it down even more than what’s shown. From there, the follow through could be more accentuated by having Altuve bend his knees a little more and lean back a bit on the swing.

The celebration is also slightly off. He does the sign of the cross, but he needs to kiss the necklace he’s wearing, and he could also stand to point to the sky.

Analysis: Brantley has the most problems of anyone on this list, and even his issues are somewhat minor. The problems start with the stance. He needs to get lower and stick his butt out. From there, he has little to no leg kick, and he has a very quiet lower half even on the follow through. Lastly, Brantley over-rotates on the follow through in The show, while it should more just be his chest opening up as the bat flies out to the side of his body.

We wrap things up tomorrow with the Texas Rangers. It’s been quite the journey.