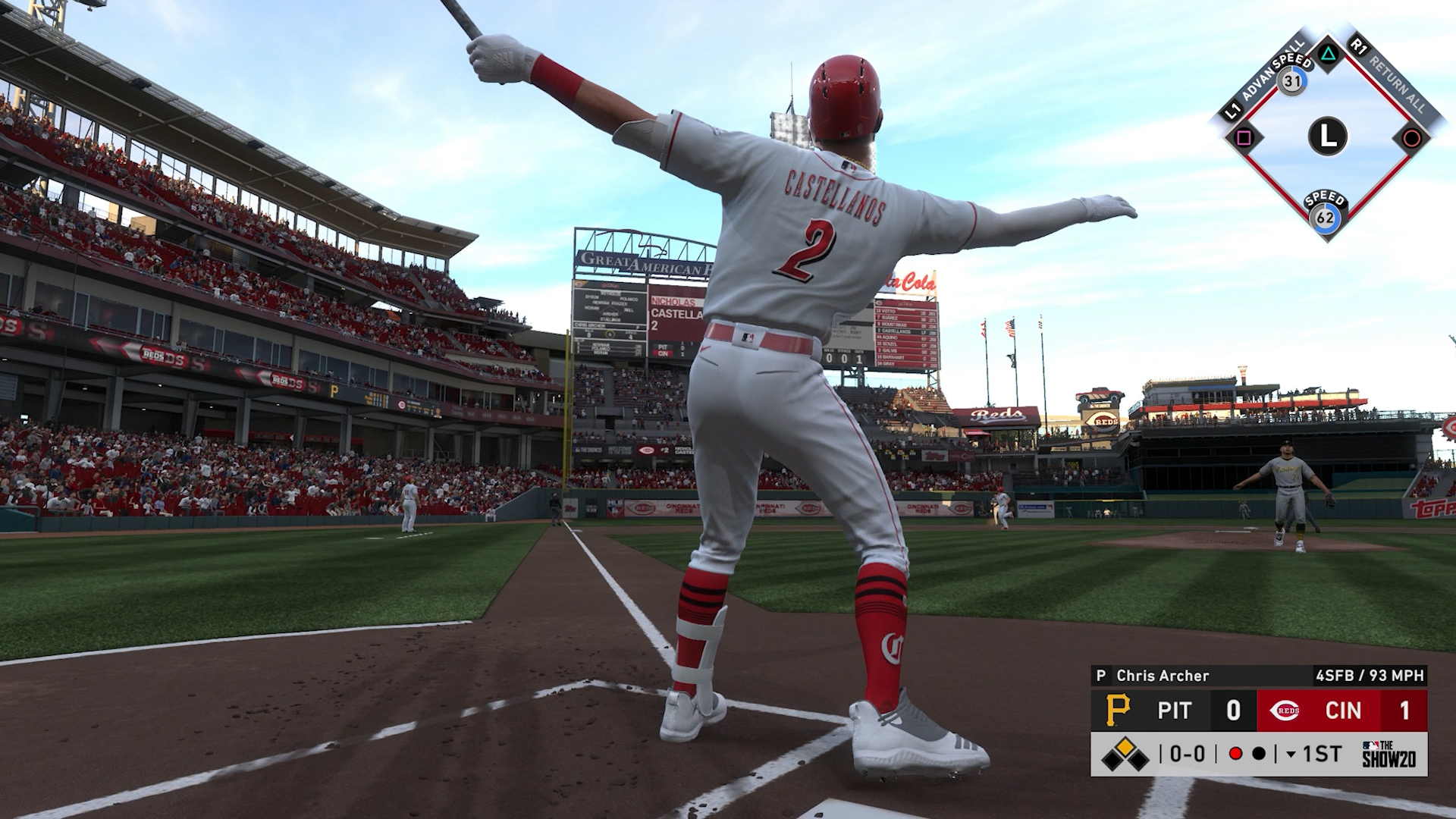 Following up on the St. Louis Cardinals, we continue our trek through the NL Central as we now discuss the Cincinnati Reds home run swings. The Reds have new faces mixed in with the old guard here so it’s a diverse group to analyze.

Analysis: We start off the Reds with Suarez and his 49 home runs. The only slight tweak to make to his setup is moving his left foot a bit so it points out towards the outfield a little more. The swing and the leg kick look spot on, and from there perhaps the only other small adjustment is giving him even more extension on his arms when he swings the bat.

The celebration is also just about 100 percent accurate. Suarez will slightly alter his celebration, but he will generally always touch his heart, then his face/head region and then open his arms to look/point to the sky. Suarez would be someone I put in the “must get right” category due to his home run outburst last year, and I think SDS has done that here.

Analysis: Mike Moustakas is a new face on the Reds, and his portrayal in MLB The Show 20 is well done. The setup is just right, even making the slight hand adjustment to load for the pitch here. Moustakas has a clean and simple swing, and that’s shown off to full effect.

With the celebration, the one in The Show is slightly more extended than the exact version I clipped here from a Brewers game, but the point is it’s accurate to what Moustakas will usually do. He kisses his hand, then touches each shoulder, then throws his hands over his head when he gets to home plate.

Analysis: With Votto, there have to be some tweaks made, but overall the form and swing itself are good. Votto’s hands need to be lowered just a bit more these days, and on top of that he’s a little more twitchy and bouncy at home plate. This means adding a little more bat wiggle, and then having him bounce on the front foot a little more. The swing itself is good, and the two-handed follow through before quickly returning to neutral to drop the bat are mostly correct as well.

Analysis: Ending with the last newcomer to the Reds, Castellanos is sort of a hard one to grade because conceptually he’s perfectly accurate, but the execution is just slightly off. The setup and leg kick are great, and then the swing itself looks good as well. However, the follow through is where things go slightly off the rails. There’s a little more drop in his front shoulder on his swing as he pulls his hands in more towards his body than he will in The Show. On top of that, he holds on to the bat just a little too long in The Show before getting to that one-handed follow through and dropping the bat. However, getting to the follow through with the spread arms is close to what Castellanos does on home runs in a way so they’re in the right ballpark, the animation just needs to be sped up a little bit more to be closer to one-to-one accurate.

Aristides Aquino is the big one I assume adds to the Reds by next season. Another younger player like Senzel could also get there, and with Dietrich’s power surge here and there he’s another one on the cusp who could make it in with one big home run season. The Milwaukee Brewers will be up tomorrow as we continue through the NL Central.

Comment on this article
Continue Reading
You may also like...
Related Topics:cincinnati reds, MLB The Show 20, signature home run swings