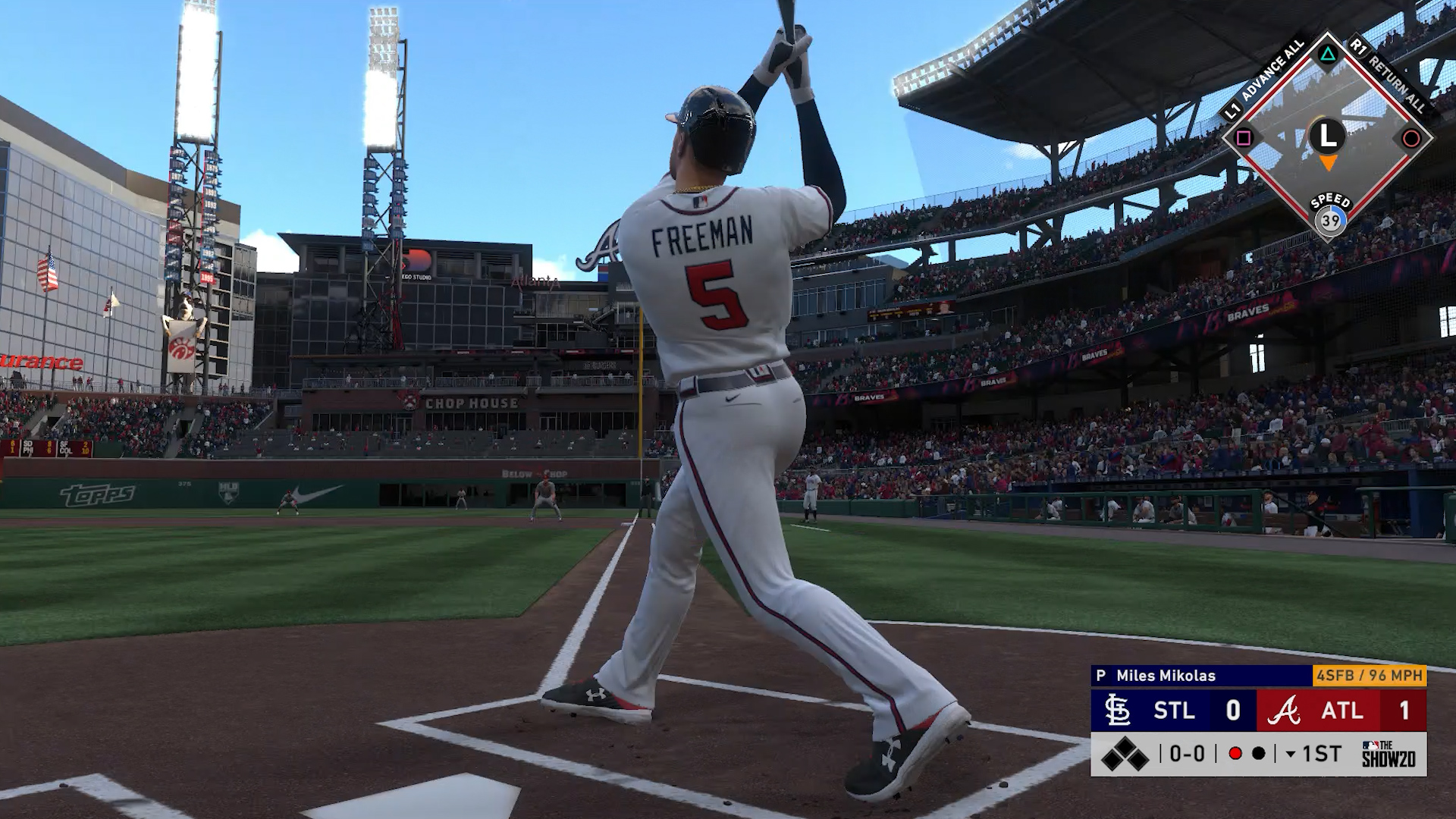 Coming after the Washington Nationals, the Atlanta Braves are a much more interesting team to grade and analyze. There’s a lot of Braves home run swings to discuss, and there’s also plenty of signature animations here. We also get our first switch hitter who has custom elements from each side of the plate — something most of the other switch hitters in MLB The Show 20 don’t have on home runs.

Let’s break it all down.

Analysis: Freddie Freeman is the least exciting player on this list in terms of analysis, but it’s just because he has a very simple swing and celebration. He could use slightly more knee bend in his setup at the plate, but otherwise the real life and Show versions are very close. Freeman is quick and compact through the zone with his swing, and maybe the only other quibble is he usually returns the bat head to the ground after launching a ball a little more quickly than he does in The Show.

Freeman does have a custom celebration in MLB The Show 20 that’s a basic hug at home plate, but he doesn’t really favor that or anything else in particular in real life.

Analysis: Albies could use a little more height to his leg kick on the load, but otherwise another good one-to-one comparison here. Albies even has just a little more sauce on his celebration as he leans back in The Show to enjoy his handiwork, but I’m fine with that sort of little added touch. Considering Albies is weaker from the left side, this is good work to still nail the “lesser” swing.

Analysis: Again, the leg kick could use more height to it, and his left foot isn’t usually flush to the dirt while setting up, but otherwise really good work. Albies tucks that left arm in after launching the home run, and he’ll usually throw the bat away in a similar fashion. The Show version could perhaps have him release the bat from his right hand even a little more quickly on the follow through, but again, I’m being hyper critical at that point.

The celebration is in the right ballpark, but The Show might be slightly constrained by how they handle celebrations right now. Albies does do a sign of the cross after his home runs, but he generally kisses the necklace he has around his neck and points to the sky with just the one hand. Also, most do the sign of the cross with slight variations, and Albies does not usually go to the face to start things like he does in The Show.

Analysis: Another somewhat undersold leg kick, but from there it’s smooth sailing for the comparison. Acuna Jr. has major extension and explosion through the zone, and that shows up in MLB The Show 20. On top of that, both the real and video game Acuna Jr. like to stare a bit before getting out of the box.

The real fun comes in with the celebration. Acuna Jr. does the sign of the cross, but he’s got much more flare to it. In real life, Acuna starts off doing a mostly traditional sign of the cross, but then kisses his fist, puts a fist to his chest, taps his arm twice, then looks to the sky and then does the exaggerated clap across home plate. The Show mostly nails it, and it’s one of the more memorable celebrations in the whole game.

Analysis: Another great re-creation here for the celebration. Ozuna has another take on the sign of the cross, and he uses the right arm and just goes through it quite quickly, which is nailed here. He will do slight tweaks on the final swag of his celebration as he crosses home plate, so both versions shown here are acceptable between the video game and real life.

As for the swing, it’s just about perfect as well. he does a double toe tap for the load, and Ozuna has an open stance he closes up on the swing itself. The only slight tweak I would make is have him carry himself through the swing a little more in The Show. In the MLB clip, you can really see Ozuna turn on the pitch and the left arm almost carries his body through the swing in a little more violent fashion. Still, it’s hard to get that sort of violence into a swing, and Ozuna more does it when he pulls a pitch down the line.

I think everyone notable is covered here. Dansby Swanson is on the cusp but he needs to put together a full season. Someone like Austin Riley is another player to consider perhaps at some point.

Next up are the Phillies.