Each year, a new crop of young phenoms make their debut at the big league level. A select few make such an impact that they become household names before their sophomore campaigns. Last year, the likes of Ronald Acuña Jr., Juan Soto and Walker Buehler were some rookies who left their mark. You could also argue all three already carry “star” designations heading into this season. With that in mind, 2019 figures to be no different as a number of young prospects have blitzed their way to farmhand fame and will soon graduate to The Show, both literally and virtually.

Every year, content creators at Operation Sports do a masterful job of crafting full minor league roster files for the community to enjoy. This requires the creation and alteration of 1,800-plus players. But of that batch, a select few receive a little more attention than others. Here are five minor league prospects expected to make their debut in 2019. 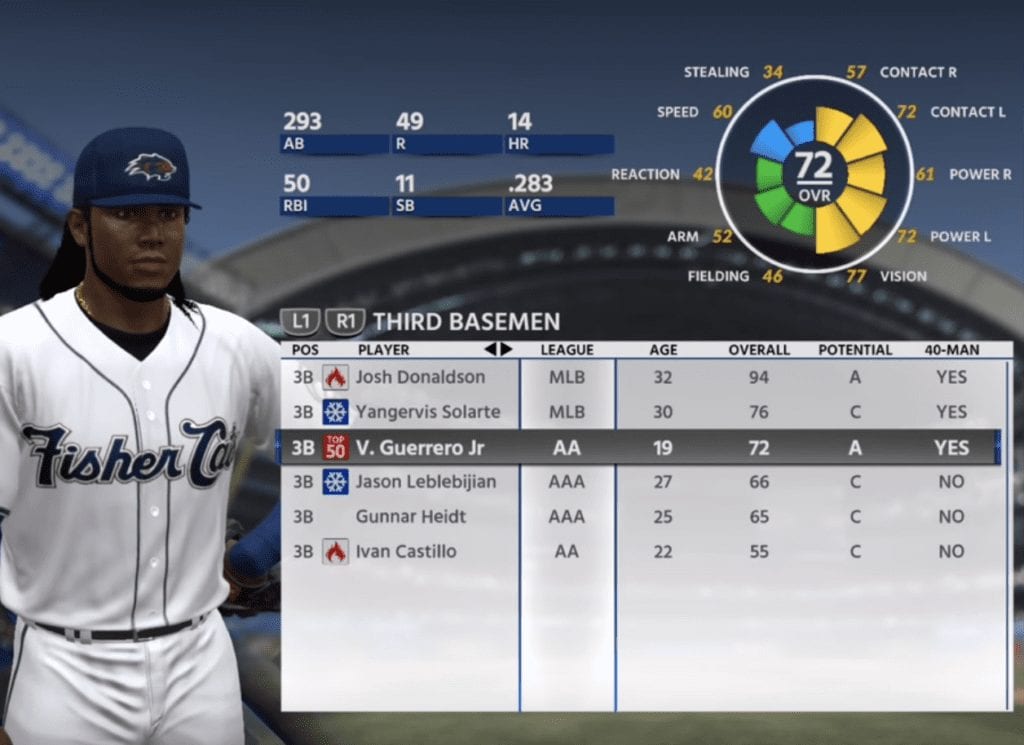 Let’s just start from the top. The very, very top. Blue Jays super-prospect Vladimir Guerrero Jr. is quite possibly the greatest hitting prospect to come through a minor league system in the last 15 years. “Vlad” has been mentioned in the same breath as guys like Alex Rodriguez, Ken Griffey Jr. and Miguel Cabrera. Their pro careers entirely aside, these three donned some of the highest “prospect” marks in the history of scouting. Turns out those reports were correct.

The son of Hall of Fame right fielder Vladimir Guerrero, this prodigal son carried a .400 batting average for much of the 2018 minor league campaign. Had it not been for major league service time stipulations, Vlad would have made his debut with the Blue Jays midseason last year. So it’s literally just a matter of time…

Unbelievably, Vlad carries the ONLY 80-rated hit tool in the history of MLBPipeline, the official prospect site of Major League Baseball. He also carries a 70-rated power tool. So what does that mean, you ask? Well, in short, scouts are projecting a ceiling of a .330 hitter with 40 home-run potential. Some pundits forecast multiple MVP awards. Mike Petriello of MLB.com already ranks Guerrero Jr. as one of the top 10 third basemen in baseball, ahead of established guys like Josh Donaldson and Miguel Andujar.

When it comes to franchise and Road to the Show, the content creators here at Operation Sports will certainly apply a 99/A+ potential rating here, thus likely making him one of the best players in baseball by the end of the 2020 season.

Due to the aforementioned service time rules of Major League Baseball, Vlad will probably make his debut for the Blue Jays in mid-May this season. At that time, there’s a pretty reasonable chance San Diego Studio debuts his Diamond Dynasty card with a gold designation, denoting a rating of 80 to 85. Guerrero Jr. will be one of the most sought after cards in history for Stub traders as there’s a reasonable shot he finishes the 2019 campaign in Diamond status. 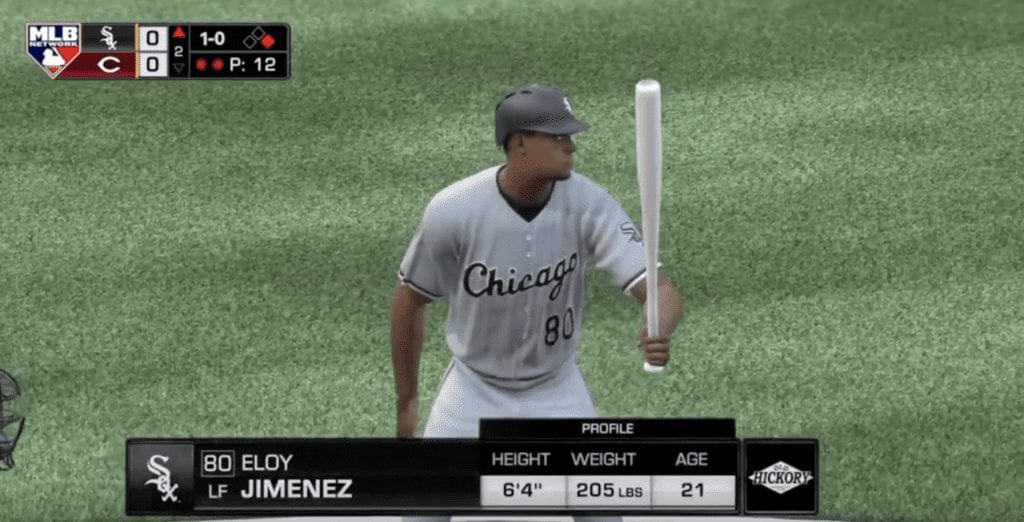 If the power meta continues to play out in MLB The Show 19, outfielder Eloy Jimenez may provide even more pop than the proclaimed prodigal Guerrero Jr.

Blessed with 70-grade power, Jimenez brings some serious punch to the plate. He can also be “hidden” in left field, so his defense may not prove to be the liability that Guerrero’s can be at a premium position like third base. Also in Jimenez’s favor is the fact there are far fewer impact left fielders than there are third basemen or first basemen. The glut of corner infield talent around the league means Jimenez likely gets the nod for positional flexibility and value. (The argument can be made at the very least.)

Like Guerrero Jr., Jimenez will likely make his debut in The Show this May once his Super Two status is cleared. An imposing force, the White Sox outfielder stands 6-foot-4. His pure strength has drawn comparisons to Giancarlo Stanton, but Jimenez likely won’t strike out as much as the Bronx Bomber. Jimenez is a below average runner with a below average arm. Many are still skeptical of his ability to play the outfield full time, meaning an eventual move to DH at the major league level is possible.

Diamond Dynasty is largely situational. It’s not always about the “top” prospects. Sometimes you need to have the pieces to just get the big out. Astros relief pitcher J.B. Bukauskas is the perfect example of that. Bukauskas is the type of dominant relief pitcher who will fly through the minor leagues. He reached Double-A last season, but struggled with some nagging injuries. He’ll likely start 2019 at the Double-A level once again, but could skip Triple-A if Houston is in a pinch for impact bullpen pieces.

Blessed with a one-two, fastball-slider punch, some would argue Bukauskas has the stuff to pitch at the major league level right now. The heater tops out at 98 MPH, allowing the sharp, wipeout slider to play extremely well to both right-handed and left-handed hitters alike. As long as Bukauskas can stay healthy and limits walks this season, he’s likely get a cup of coffee or more in Houston the season.

Admittedly, I’m rooting for this Tampa Bay Ray starting pitcher to make his debut in 2019. Honeywell was destined to make his debut in early 2018 for the Rays, but fell victim to a torn UCL, leading to Tommy John surgery. Honeywell will likely be ready mid-season, but will undoubtedly be sent to Double-A or Triple-A for some tune-up before presumably making his debut toward the back half of 2019.

You’re probably wondering why a starting pitcher makes this list. Well, Honeywell is one of the only pitchers in the last three decades to throw a Screwball. The pitch is a lost art, and anybody who’s had to deal with hitting one in The Show knows what I’m talking about (see: Warren Spahn). Honeywell is considered a top prospect headed into 2019, but like with most starting pitchers in The Show, he will likely be pushed aside for more established, higher-rated pitchers. That being said, if a “Future Star” card is put out, it will instantly become a favorite among users, much like this year’s Michael Kopech card.

Each year, a few names come out of nowhere to take baseball by storm. 2018 saw unpredictable rookie campaigns from guys like Nationals OF Juan Soto, Marlins OF Brian Anderson, and Mets IF Jeff McNeil. 2019 will probably produce a few more kids providing unexpected results for their teams. However, supreme prospects like Acuña Jr. and Buehler almost always rise to the top. Let’s hope some fresh blood injects more fun and parity into MLB The Show 19.