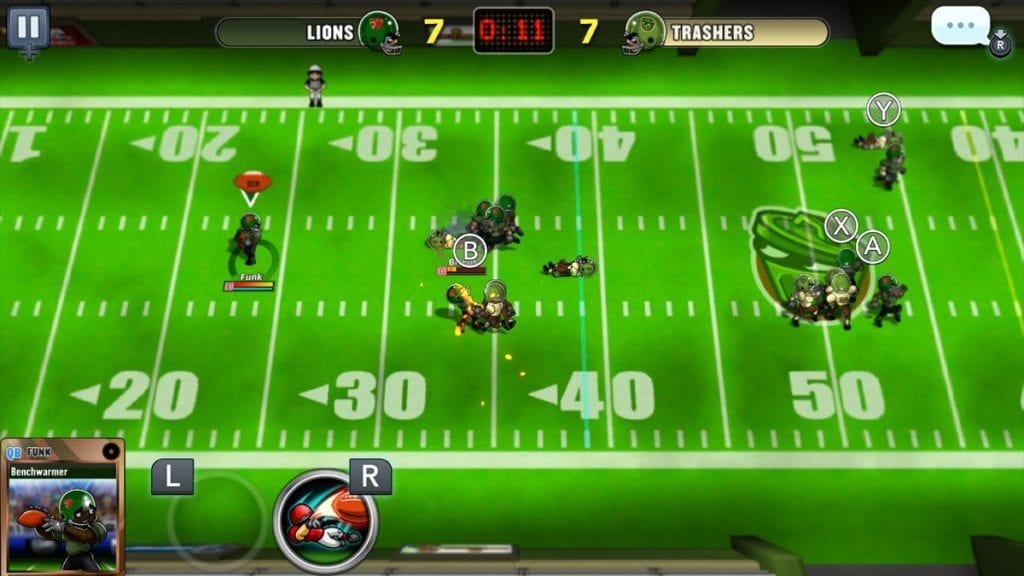 Football Heroes Turbo has been released on the Nintendo Switch console for $14.99 (it was previously released for PC via Steam). It is a combination of some great football classics such as Tecmo Bowl, NFL Blitz, and even Double Dragon. If you love a fast-paced game with minimal rules, quick games, and even some team building features this game is for you. The similarities between Tecmo Bowl and this game are easy to see. However, the developers have done a good job of adding their own features to make this game feel different.

The game consists of a camera angle very similar to Tecmo Bowl. The camera follows wide receivers running routes unlike Tecmo Bowl — which doesn’t show the receivers once they go off camera. Players choose their passing targets via button icons. In order the avoid getting tackled, players can run, juke, punch and kick their way out, or simply use power-ups such as a fireballs. Yes, some players have special abilities they can use throughout the game. Once the special ability is used, there is a cool down where a player is unable to use his special ability.

There are several gameplay modes available, such as season mode and online head to head where you take your team in season mode and play versus other users’ teams. Season mode is similar to an Ultimate Team mode where you card collect (better players have better special abilities and stats) and take on the computer teams in hopes of becoming a champion. You can also sign free agents as long as your team is under the salary cap. 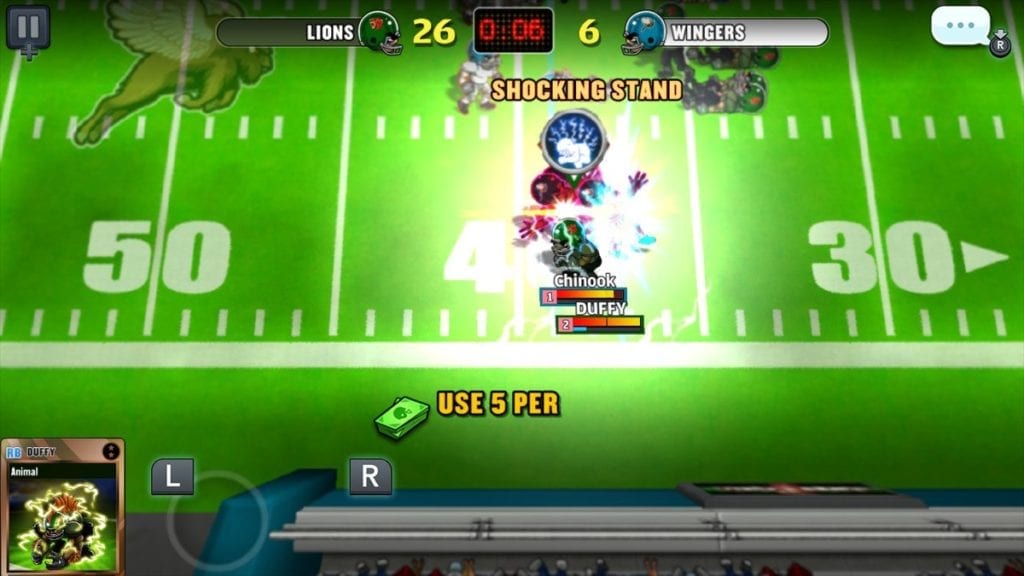 This game brought back some great memories of Tecmo Bowl and NFL Blitz. I was looking forward to playing this game, and it was exactly what I expected. The game is fast paced and it’s easy to learn how to play. Unlike Tecmo Bowl, you actually have a choice to pick what defense you want to play. If you pick a defense that counters the offensive play, the defense will stop the play similar to Tecmo Bowl. You can hit players after the whistle, granted it’s not as violent as NFL Blitz was, but it’s still a nice little touch to end the play.

I ran through the quick tutorial, and I thought it did a good job of showing you how to do the core functions both on offense and defense. The tutorial showed me how to use the special moves, out punch a tackler and how to pass. I quickly learned in my first game that this would be a game without many rules coming into play. In my first game, I threw to an open wide receiver, but he was then drilled before the ball got to him. I was looking for a flag and realized that contact was encouraged similar to NFL Blitz. I also like the change to the camera in comparison to its Tecmo Bowl ancestor. The fact that we can now see the receiver we are throwing to is a big plus compared. You can actually predict a route and determine how hard/soft you want the pass to be via holding the desired button. 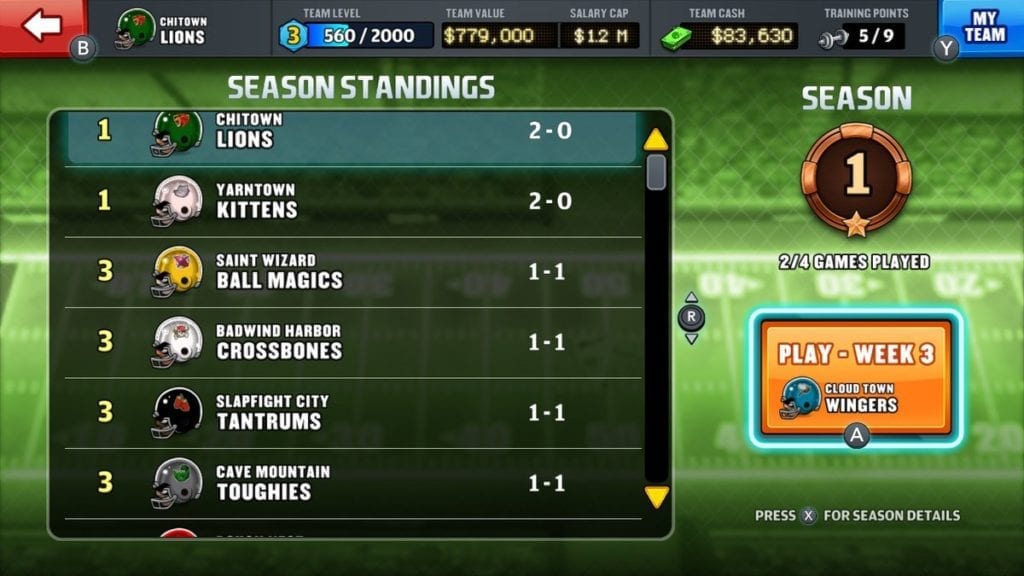 The season mode is a fun way to build your team that is similar to Ultimate Team modes. One of the biggest features to the mode is the customization options. You can customize your team’s city, name, colors (jerseys, pants, helmets), logo and even a team quote. You can change your player’s name, number and skin tone. This gives users the ability to give their team a certain feel and look. Teams are given training points they can use to (duh) train their players. Training points are awarded by playing games, and they are used to level up the player once he has reached his max. Each player has a salary that is added up and creates a team salary. I enjoyed playing the season and earning cash for more signings. As your team levels up, your salary cap increases as well to allow you to build a better team.

If you love a game that enforces physical contact, this is the game for you. There is a ton of punching and special moves to make sure you get all that aggression out. I ended up paying for a running back who I felt was really strong. In fact, I felt like I was Walter Payton initiating the contact rather than avoiding it. I like that the special moves seem to have a good variance and are not just a contact bonus either. There are some bonuses that improve the accuracy of your QB, or the focus of your receiver as he makes an important catch, or even slows down the kicking arrow for a clutch kick. Strategy definitely plays a role in determining when to use your special move because if you use it at the wrong time, you could miss having it during an important play. There were even some cool combos I was able to pull off in order to take down a ball carrier or remove a would-be tackler.

One of the biggest issues is the lack of gameplay options. The options menu has no depth and doesn’t provide the user any options to change the game in big ways. I thought they could have given the user a little control besides sound. There is not even an option to change game length. The game is currently only two 2:15 halves with a running clock. The game plays extremely fast in terms of actual time. You could finish a game in just over five minutes. Basically, you only have enough time that every team gets one possession in a half, maybe two if a team scores right away. I wish there was an option to change the time to a five minute half or even 10 minutes if you want to have a longer game. 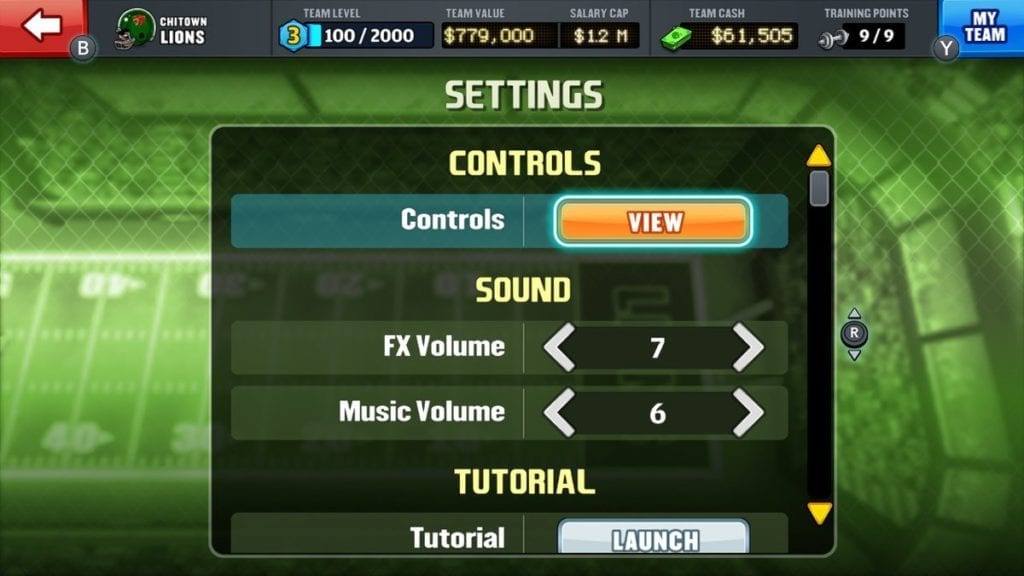 The season mode is really quick, and I wish it were a little longer as well. It took me less than an hour to finish a full season all the way to the championship. The season mode schedule is four games followed by a playoff tournament. I understand that they want to have users finish quickly and move on to the next season, but it just seemed too easy to finish a season. Maybe some users will find this as a positive because time is limited and they just want to knock out a season quick, but I just felt it could be a little more in depth. I also wish there was some small form of a stat tracker. There is no way of seeing stats of your players in the season mode.

I could not find a way to play the computer without playing a season game. This is a minor thing, but I thought it would be nice to be able to play a game without it impacting my season. It was tough to find an opponent in an online match but this could be due to a low amount of users that have the game. Hopefully, as time passes and it gets a little more exposure this will change. 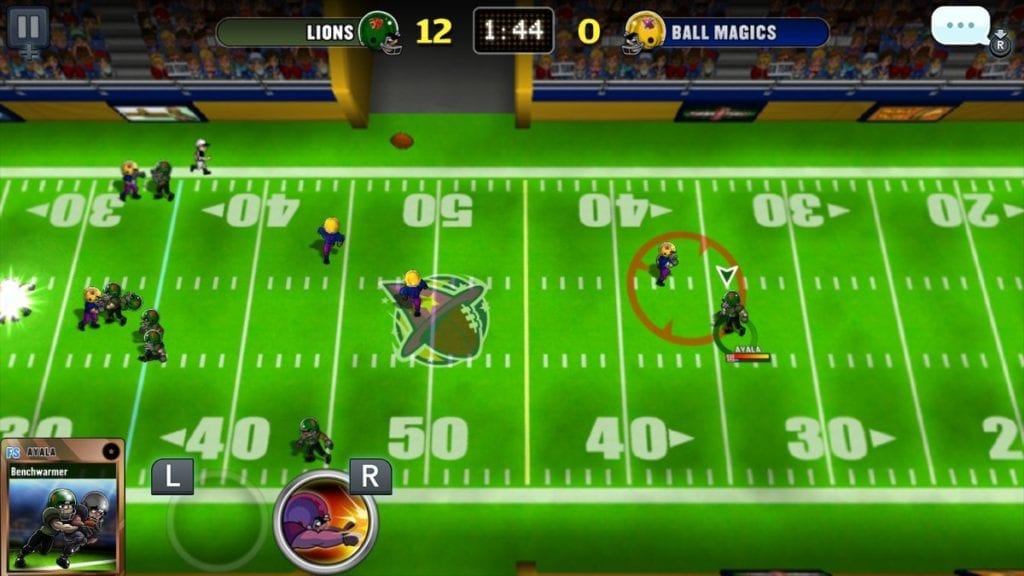 I think this game is fun if you were a fan of Tecmo Bowl in the past. The developers did a good job of giving the users a chance to play a classic game with an added wrinkle of their own. The special moves really do add a layer of strategy that is fun and important to team success. The season mode is fun but I wish it had some more options. Games are really quick, but that may be a positive or negative depending on user preference. Overall, the long-term outlook may not be that great considering the seasons are quick and are repetitive. However, the RPG aspect of the season mode is fun and could attract team builders who want to assemble the best squad.

Since this could be viewed as a mobile game due to Nintendo Switch’s mobile ability, I thought it played well on handheld. I didn’t notice much of a graphic drop in handheld mode compared to docked. It is also nice that the Nintendo Switch in handheld mode has a touch screen. You can actually change players and pick who to throw to by touching the screen if you wish. I would say it isn’t an ideal way to play but it’s possible.