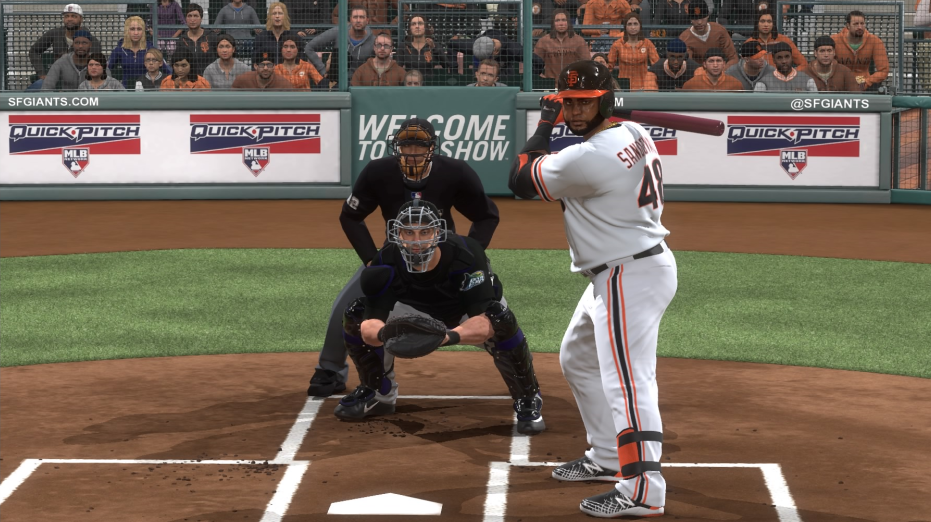 Like it or not, the designated hitter is inevitably coming to the National League for this season (assuming we make it to the start date). And once we cross that bridge, I don’t think it’s likely we’re going back. While I’m certainly not in the “get off my lawn” stage of my life age-wise, I’m not really a fan of the DH. I believe the designated hitter should be forced to play the whole field while in the lineup. All of it. Every single position. But that’s an argument for another day, on another website.

The addition of the designated hitter might rob us of some of the simpler joys of the game, like Bartolo Colon hitting home runs, Trevor Bauer imitating his teammates’ batting stances, or just bunting in general. But it also might help a few National League teams with, say, a logjam of outfielders. It also might help boost every NL team, since one out of every nine at-bats is taken by someone hitting around .138 (unfortunately, Chris Davis doesn’t play in the NL, so this rule change won’t help him or the Orioles in any way).

MLB The Show 20 gives you the option of adding the DH to both leagues. With that in mind, for those of you who like to mimic real life, you might now be asking, “who should be my DH for [Insert NL team here]?” Well, I’m here to help. Using real-life data from the past five years, I’ll look at who the ideal DH candidates are for each National League club.

What The Real Data Tells Us

To find out what AL teams are doing with their designated hitters, I took a look at any player from the past five seasons who played 80 games or more at the DH spot. In all likelihood, teams will rotate players in and out of the DH spot throughout the season. This was evident by my results, as only 45 instances met my criteria. 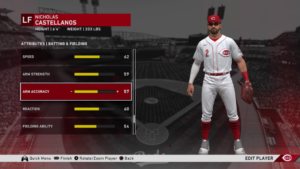 As you’d expect, someone playing designated hitter is usually someone whose bat you want in the lineup, but not at the expense of your defense. This was confirmed when I looked at what other positions DHs come from. Besides batting in the DH spot, over half of this list played first base, about a third of them played in the corner outfield, and there were a few third basemen as well. Two of them also played catcher, one also pitched (I wonder who!?), and one played second base. The person who played second base was the very memorable Jimmy Paredes, who played literally one game there in 2015.

In terms of offensive production, the players on this list averaged around 28 home runs per year, while hitting .262 and slugging around .480. They struck out twice as much as they walked, and had minimal speed, averaging under a triple per season and two stolen bases. Their average age was just under 33.

So, we are looking for corner infield/outfield players who hit for power and lack plate vision/discipline. They skew older, and they aren’t winning any footraces. Let’s see what virtual Major League Baseball has to say.

What MLB The Show Tells Us

The Braves have a few good candidates. Travis d’Arnaud fits the bill but is definitely a better hitter against lefties. Adam Duvall has the power, but he’s a pretty good fielder. Marcell Ozuna can hit, but his arm strength and speed could use a little help. But I think the best bet for Atlanta is Nick Markakis. He’s definitely up there in age, and the speed isn’t really there. He hits for a better average than a standard DH, but that’s a plus here. It helps ease the logjam of outfielders the Braves currently have.

The Marlins have a bunch of young outfielders, but they’re not all hitters. Corey Dickerson is the best of the bunch, but his fielding ratings leave something to be desired. First baseman Garrett Cooper has solid contact numbers, but his reaction and fielding are slightly behind Jesus Aguilar. I imagine they could split time in the field and at DH if you opt to keep Dickerson in left field.

In Washington DC, you have three good options: Ryan Zimmerman, Howie Kendrick and Eric Thames fit the age group. Howie Kendrick has some of the best contact ratings in the game, but Starlin Castro, another second baseman, can hit well, too. The Nationals have three other start-worthy outfielders outside of Thames, who can’t hit lefties. Ryan Zimmerman can hit lefties better than most in the game. They’re all pretty slow and have weak arm strength, so your best bet is some kind of three-man weave at first base and DH with those three. 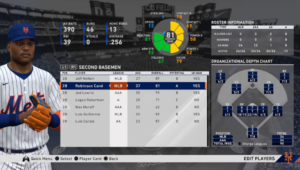 The Mets seem to have the reverse problem of some of their division rivals in that they have a surplus in the infield. But their two best options are Robinson Cano and Dominic Smith. Both play positions seemingly occupied by better players (Pete Alonso and Jeff McNeil). Cano has better contact ratings, making him the better option, though he might be an even better fielder than McNeil.

The Phillies have a lot of shortstops on the official roster, but they can all play around the infield, so they’re not the answer here. Philadelphia does, however, have two outfielders in their early thirties. Andrew McCutchen and Jay Bruce both have the reaction and fielding ratings to play the field. While McCutchen has better speed, Jay Bruce has a better arm. There’s not any downside to putting one in the DH spot, as the other will likely be starting as an outfielder.

The Cubs have a few reasonable options, it all just depends on how you set up your fielders. David Bote, Kyle Schwarber and Ian Happ fit the bill here, even though they are younger than the prototypical DH. I’m a fan of putting Almora in at center field, but if he’s the odd man out, David Bote is your guy. If Almora starts, Happ has some good power against righties and has the worst fielding ratings of those mentioned here. 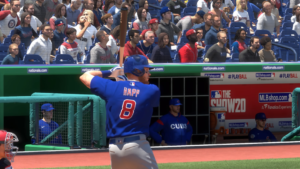 In Cincinnati, Aristides Aquino seems like an obvious choice with his power and average contact, but his arm is really good. Nick Castellanos and Jesse Winker are just okay fielders, and Nick Senzel can man an outfield spot to move one of them to the DH spot. Another interesting option is pitcher/outfielder Michael Lorenzen. His ratings are average, but he’s knocking on the door of two-way status and would be a good part of any rotation at the position.

The Brewers have a list of interesting old guys to put here. Justin Smoak, Jeff Gyorko, Ben Gamel, Ryan Braun and Eric Sogard are viable options. Two of these players would fill the spots at first and maybe third (if Brock Holt isn’t your guy there). It seems Ryan Braun would be the best option.

If you want better defense at first base in Pittsburgh, you could start Jose Osuna at first and move Josh Bell to the hitting-only role. Bell is going to start regardless, as you’d want his power in the lineup. If you’re not fond of Osuna, Kevin Newman could be the rare middle-infield DH. He’s got good contact numbers and has subpar fielder numbers.

St. Louis has a few good fielders in Harrison Bader and Tyler O’Neill, making them stalwarts in the outfield. Dexter Fowler’s ratings aren’t so great, but luckily, Tommy Edman (listed at shortstop) can play all three outfield spots if needed. He’s a better hitter in the game than Paul DeJong, but DeJong is too good with the glove to take out. Fowler meets the apparent “old guy” mold here, but it’s a toss-up between him and Edman. 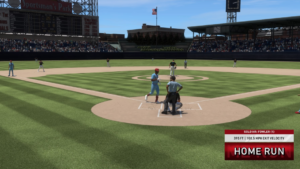 Arizona might have my least favorite options for a designated hitter. Jake Lamb is here but his power ratings aren’t as high as they would have been two years ago. His batting average last year was .193, so the Diamondbacks might be better off just letting the pitcher take his hacks at the plate. After their starting outfield (the law firm of Marte, Marte and Peralta), they have Kole Calhoun and Jon Jay. Calhoun offers decent power while Jay’s contact ratings are both over 70, but he has very limited power.

The Rockies have a very good fielding infielders, so you’re likely not moving anyone there. They do have two first basemen, however, with Daniel Murphy and Ryan McMahon. Murphy is 10 years older and makes contact, while McMahon offers a better power solution. Colorado also has a four-man outfield group that all hit pretty well, but their fielding is okay. Charlie Blackmon has the least inspiring fielding ratings, but his bat is the second-best on the team.

For the Dodgers, there are a few choices. I assume you’d want Mookie Betts and Cody Bellinger manning center and right field. All the infield spots are taken, so you’re left with Gavin Lux, Joc Pederson, AJ Pollock and Chris Taylor. Pederson’s a pretty good fielder, so I’m putting him in left. Pollock offers a better power bat than Taylor, so he’s likely the best choice.

In San Diego, Josh Naylor could be someone you bring up to be the DH. Jurickson Profar could also fit, but he handles lefties a lot better than right handers. But the Friars have three outfielders you’d want in the game. You’ll want Tommy Pham in for his bat, but also Juan Lagares and Trent Grisham for their glove work. This leaves Wil Myers as the odd man out. His fielding ratings are below the aforementioned outfielders, but his power potential against left handers is hard to ignore. Profar will probably strike out a lot less, but Myers has a very large contract to be sitting on the bench. 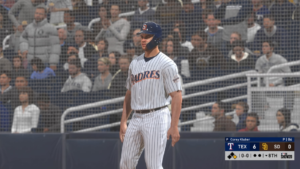 Buster Posey is still too good a catcher to put him in San Francisco’s DH spot all the time. If you’re impressed with Yolmer Sanchez at second base, Wilmer Flores could fill the role. Hunter Pence is getting up there in age and his fielding ratings have fallen off a bit, so he could be a nice fit, provided you’re happy with the Giants’ other outfielders. Your other options include Evan Longoria and Pablo Sandoval. Longoria is good with the glove but doesn’t have the arm strength in this game. The Panda has a little bit better arm strength, but he trails in fielding and reaction ratings. Both are pretty average with the bat.

There are a few free-agent options, too. Yasiel Puig, Ben Zobrist and Scooter Gennett all offer some upgrades at the plate over some of the players mentioned above. They’re also upgrades in the field. Bartolo Colon hasn’t officially retired, but unfortunately, he’s not in the game. There’s never a bad time to remind everyone that Bartolo Colon’s career outlasted a stadium (Turner Field) by two years.

The designated hitter is coming to the National League eventually, and there’s nothing any of us can do about it. Maybe it’s better to practice getting used to it in MLB The Show 20.