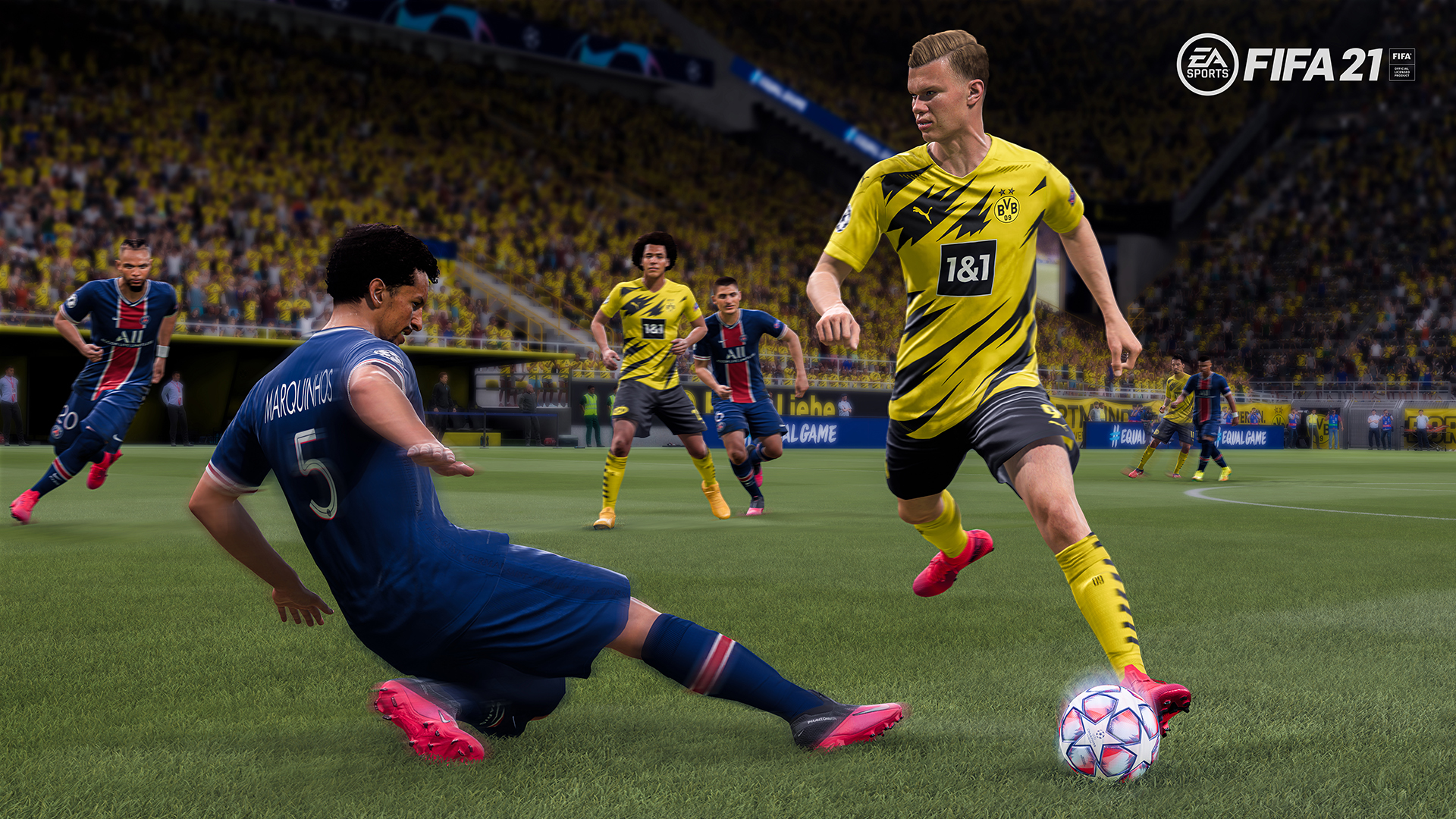 As they’ve done with Ultimate Team and Volta, the FIFA Direct Communication Twitter account engaged in some Q&A with the community expanding upon the most recent Pitch Notes blog. If you haven’t read the first two parts of this breakdown be sure to check them out here and here.

We have our Career Mode devs with us and we're ready to start this Q&A. First answer:

The more potential players get based on their performances, the more room they’ll have to grow in their Development Plans. https://t.co/rsvQsVLpkI

The Sharpness and Morale boosts are tied to a player’s preferred positions, so it can be useful to have versatile players in your squad.
(2/2)

The new Active Training is designed to help increase the Sharpness of your senior Squad, getting them to perform better in matches.
(2/2)

This one was mentioned in the Pitch Notes blog but it’s important to touch upon again. No longer will your youth academy kid who has the “potential to be special” tag be stuck with that weak foot that’s only good for standing. Personally, I have a player career mode save going with a striker who’s weak foot is 1* and it’s a real struggle knowing it will never improve. Through the new “Active Training” feature, you can create development plans and increase their match sharpness with the aim at performing better when they get their big chance. Being able to develop your weak foot and skill moves should have been in the game a while ago but we’ll take it!

The average Star Ratings of the teams in the league dictate the quality of the league.

So top rated players could potentially join a side like Macclesfield if they’re playing in a highly competitive league.

To be completely honest, I never knew league strength affected player recruitment. I was always under the impression that your own club’s star rating was one of the primary factors in determining if players want to come play for you, along with depth at that position, wages, etc. Hopefully, as NNClaNN takes Macclesfield to new heights the manager objectives and, most importantly, the transfer/wage budgets scale accordingly.

It’s part of the Customize menu where you can also choose other options such as Side Select, Kit Select, and Game Settings. https://t.co/CYqG7Rbsxz

Good to know that we’re not removing options in FIFA 21!

We auto-pick your controller side and use kit clashing logic by default, but you can go into settings to customize these as you wish.

We just want to get you into the match faster. ⚡️ https://t.co/bm8Y4f9AWk

I was a bit confused at the whole concept of “auto-pick” when it came to kit selection but this helps to clarify it some. Getting into matches faster is probably a good thing for a lot of online players, but I still prefer to select my own kits. Hopefully, FIFA 21 will bring retro kits back to the catalogue. Despite not having as many licenses, one of the best things about edit mode in PES is downloading and using retro kits.

Yes. The standings are better balanced now and you’ll get more authentic standings with a mixture of results.

The opponent AI adapts their playing style to the quality of your squad and play differently if your players are better or worse rated. https://t.co/zVjctrwpM3

One of the worst things about FIFA 20 career mode was somehow the league tables were a mess. Clubs like Ajax and PSG, who dominate their respective leagues, were going through entire campaigns without even losing a match, often conceding single-digit goals, too. The table within whatever league you were playing in was generally fine but the optics from around the world were bad.

The second part of this question has me intrigued and, quite frankly, on the fence. On the surface, this should help when it comes to variety and clubs playing differently, but will clubs now play down to your level? I would certainly not want some League 2 side playing to my level as often is the case in FIFA 20. This seems like one of those new features we’ll have to see with our two eyes first.

We added more countries where you can send your Youth Scout to, such as Wales, Ukraine, Serbia, Albania, the Baltics, and more.

The database of names to pick from for Youth Players has increased to over 5000 first names and 8000 last names. https://t.co/AJ4TO8Qfl6

Wales is back and they brought some friends, namely a host of Eastern European countries. In including these new countries, EA has also expanded the name database to accommodate the new nationalities. The more countries to pluck youth from the better. You never know when the next Shevchenko is walking through your doors.

Attribute decline is based on age and position, usually when a player is 33-34 years old.

With the new Development Plans, you can choose a plan which maintains key Attributes as long as possible, assuming the player is performing well and getting enough playtime. https://t.co/daanm1Nf15

With modern sports science better than ever, players are playing at higher levels longer. It’s good to see that this has been tweaked in FIFA 21 because the drop-off at 30 years old was reminiscent of NFL running backs. It looks like we’ll have to create special plans to ensure that Ronaldo will be banging in the goals for the next few years.

Yes, for the rest of that Career you’ll get an A grade for that specific drill every time you sim it. https://t.co/KefqQezr1u

This is one of the few changes I’m not on board with right now. While I’ve heard that training drills are harder now, I’m sure there will be a point in time where we all master the drills in which simming those drills will automatically earn us an “A” grade. I quite liked the randomness of simming player training even though it didn’t take into account player form.

Yes, you can choose certain Development Plans (Growth and/or Position Conversion) that can help you achieve growth in those specific areas.

The first part about the player attributes was already asked but it’s important to note the last sentence in EA’s reply. Work rates can now be improved upon. Seeing as how systems are all the rage in modern football, I can’t imagine managers like Pep Guardiola and Jurgen Klopp accepting anything other than all out effort, especially defensively.

We are sticking to 2D to speed up the simulation as much as possible while offering the option to jump in and out of gameplay without any loading screens. https://t.co/Nkwob2CyWY

Not being able to sim gameplay could be a limitation of the current hardware, but it makes me wonder because it’s possible to sim PES’ gameplay at two times the normal speed. I’d imagine this limitation won’t impact too many players though.

These features are designed to enhance the managerial experience and are not available in Player Career.

We are aware of current feedback regarding Player Career. https://t.co/ZU0ZwZ3gp9

Unfortunately, for players like myself who love a player career mode experience, some of these new features won’t carry over. That’s unfortunate because a few tweaks here and there would make for a much more enjoyable mode. It’s even more frustrating knowing that the features from other modes, which should be easily transferable, won’t migrate over to career mode.

An Interactive Sim Match clocks somewhere between 4-5 minutes depending on how many match events happen and how many times the ball goes out of play.

Keep in mind we're talking about regular 90-minute matches with no extra time.

You can also quick sim to the end at any point. https://t.co/F56Ph4dpsR

4-5 minutes is a solid time for an interactive sim and is line with what most Football Manager users play.

We are always tweaking transfer budgets to reflect the real world football market.

Additionally, you can use the new Financial Takeover setting to further tweak budgets when starting a new Career Mode save. https://t.co/TfbIDLYwsy

It’s always good to tweak the financials here and there to reflect current transfer market conditions. While there’s no published transfer budget for each real-life club, most of us who follow the sport closely generally have an idea of what clubs are capable of, and with no FFP you can run the club as recklessly as you’d like.

I touched upon the new Financial Takeover option (being able to set your own budget) so a feature that could be used in the most non-sim ways can now be used in a very sim fashion. Kudos EA! The control freak in me wouldn’t mind being able to set the budgets for an entire league but that’s probably asking too much.

There are several significant challenges to solve in order to create a robust custom Career Mode stadium experience.

We’ll continue to explore all options and listen to your feedback on this topic.
(2/2)

If you read the FIFA 21 Ultimate Team breakdown, you would have noticed that Stadium Creator, albeit in a limited watered down version, has been added to Ultimate Team. Unfortunately, this won’t be migrated over to career mode at this time, but it sounds like EA is open to this feature in the future. Perhaps on next gen?

And the AI can also counter by proposing another player of theirs. https://t.co/Qczu950XkW

Good to know! Let’s see what kind of player swaps the AI has in mind. It is good to know there is some flexibility in the AI’s transfer dealings.

You will get a homegrown talent in every new Career Mode save. https://t.co/Si6XUgiYbh

This is good news for those indecisive vigilante managers who are seemingly in charge of a new squad every week.

Yes, you can now take control of the development of Youth Players by setting them on specific Growth Plans, including the ability to convert to a new position. https://t.co/NUtvPcHuya

This was touched upon in the Pitch Notes as well, but being able to assign development plans to kids still in your youth academy is a great addition. It’s never too early to start molding them into the player you want them to be.

The number of save slots stays the same in order to prevent performance issues due to file size. https://t.co/ffVcFZzzhL

Ugh! Sad news for those of us who like to have multiple saves going. It looks like we’re going to be stuck with just 8 save slots, down from 12 slots that were available in the past.

There are more diverse responses in #FIFA21, as well as new questions in Press Conferences.

The potential impact of your answers on Squad Morale have also been updated. https://t.co/FHcIolQaT9

Love ’em or hate ’em you have to give EA their props when it comes to community interaction. While the answers might not be the ones we’re seeking, seeing them actively engage the community in helping to clarify questions surrounding the new additions is a welcomed sight and one that the hopefully continues through the year.