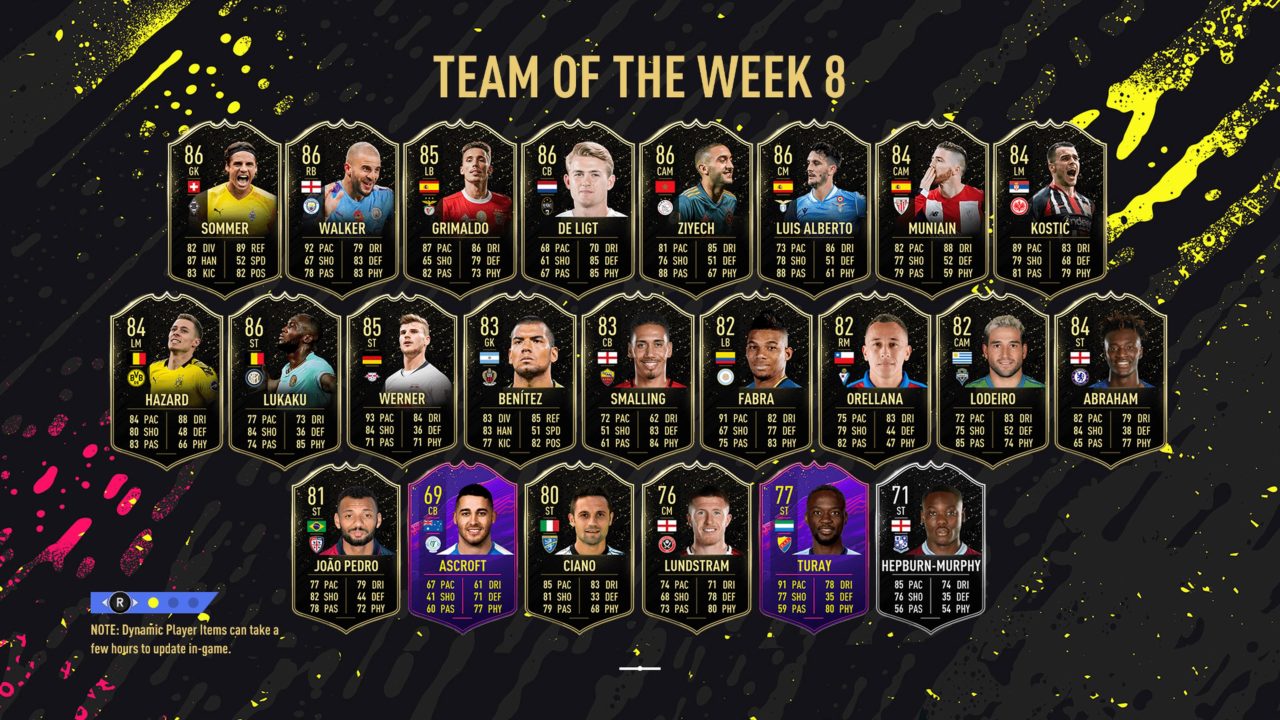 Today with Team of the Week 8 there’s some pretty intriguing options here to parse through, plus a couple in-form updates to mention. 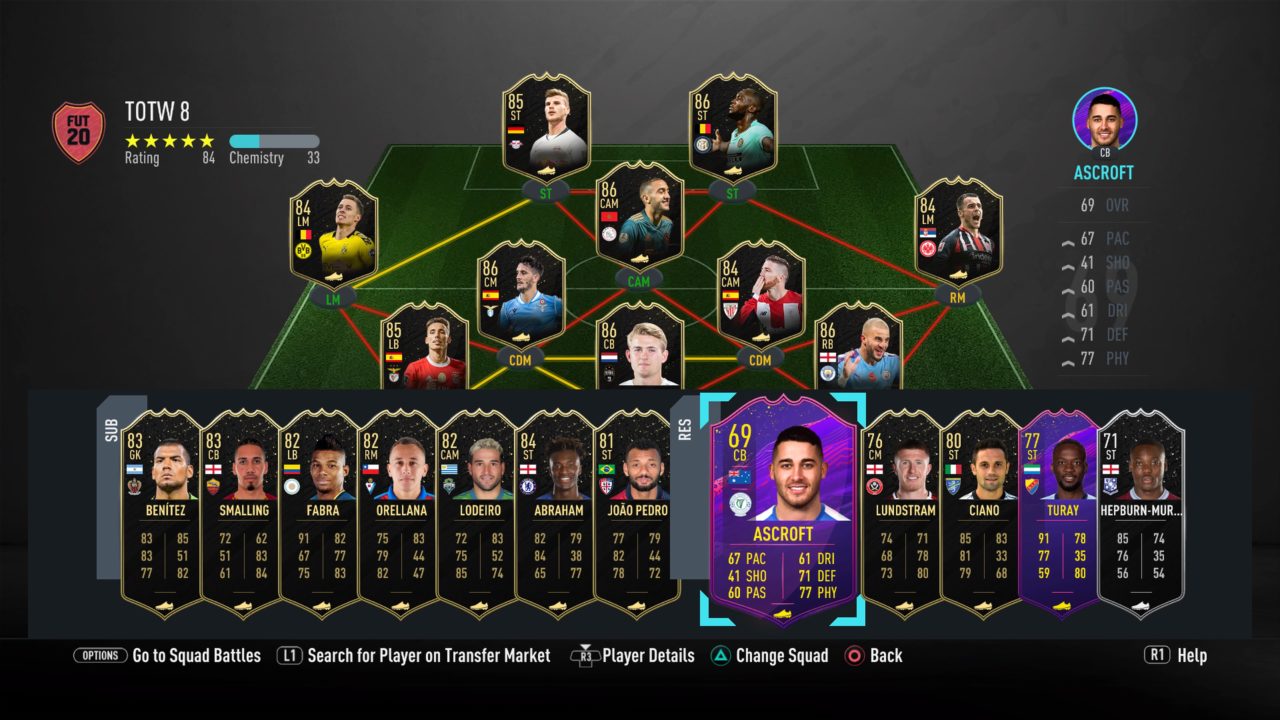 First off, we probably need to point out Kyle Walker getting an upgrade. It’s not a massive upgrade, but he’s already one of the best RBs in the game and this should only make this card that much more expensive (at least in the short term). His 92 pace and 83 defense means slapping a chemistry style on him is just the cherry on top. The other biggest upgrade is probably Timo Werner. His 93 pace and 84 shooting are a great combo, and his 75 composure is manageable. I think this is probably the best card in the Team of the Week.

Hazard, Lukaku and De Ligt got OTW upgrades, but I don’t think any of them are that crazy — except maybe Hazard being decent. I imagine people can make a little money if they invested in these cards before the OTW reveal, but it’s probably nothing crazy.

Another card to watch from this group is the Chris Smalling. It looks like a reasonably solid CB with 83 defense and 84 physical with 78 sprint speed. Lastly those two purple cards are the first Heroes of the Week. I don’t think they have any special value from what I recall, but they are added to TOTW sometimes. 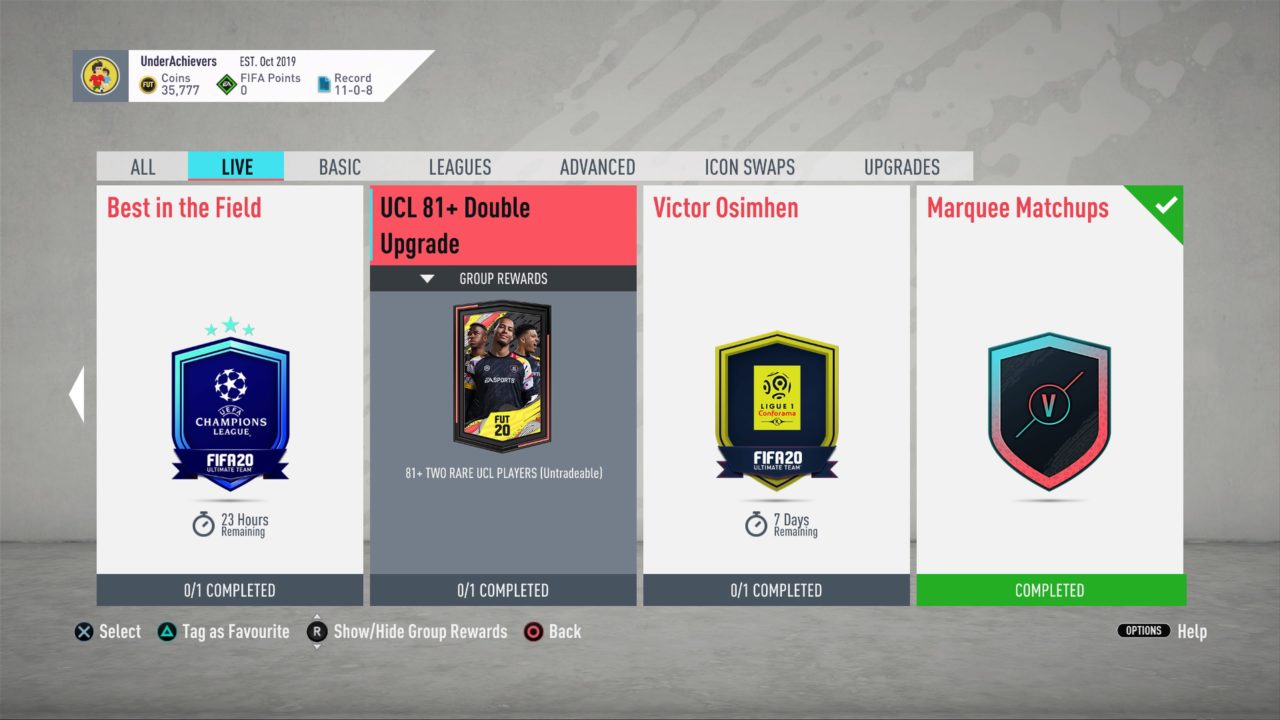 We also got two new Live SBCs, once again relating to Champions League. The “Double Upgrade” doesn’t seem really worth it as you’re trading in an 83-rated team for (probably) 81 overall players. On top of that, the Champions League backs don’t make the players more expensive or worthwhile because their stats don’t change, so I would avoid this one. The Best in the Field SBC seems worth it though. You get a Prime Gold Players pack, and it’s only taking about 6K to complete as of now on FUTBin (assuming you start from scratch).

These are the Player Picks available tomorrow on your Weekend League rewards. #FIFA20 https://t.co/U9zAwNyRUa pic.twitter.com/RftApDxK1N

Weekend League reds will go out tomorrow, so tonight will be the last smart time to invest before selling things off starting in the morning when the market rises. Otherwise, we still may get something more Champions League-specific in the near future, and this current season will be swapped out for a new one on Friday so get in your Icon Swaps Challenges if you still need to do any.