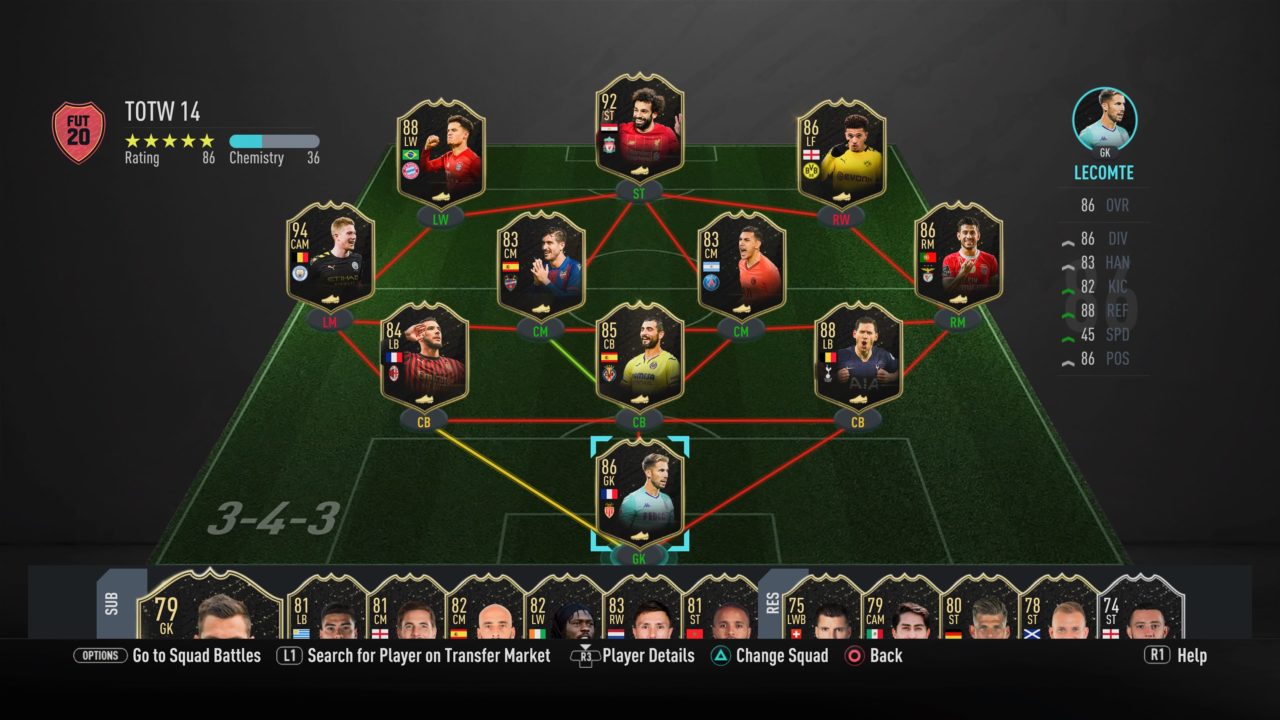 Team of the Week 14 does have some quality players in it, but it’s somewhat hard to get excited when many of them have received other recent in-forms. That being said, we still have red picks to look forward to so let’s look at how some of these players look in comparison to some of their other cards already out in the wild.

This is a weird one where yeah you get the best defender in the EPL at LB, but Vertonghen is a CB by trade. So he’s slow, his physical ratings are not insane enough to make him the leader in the EPL there, and so you take a major pace hit at the position for not enough of an upgrade. This is one of those times where you might not be stoked to get an 88 overall in your red picks.

Sancho gets a position change here that is unique for FIFA. However, his Road to the Final card does have better stats and is an 87 overall. In general, Sancho is one of those players who is probably better served out wide in a right midfielder role, so like Vertonghen this position change does not necessarily create more value for him. He does have four versions so here is the price breakdown:

Salah is the good kind of position change as he gets a move to striker from wing. This is his fourth version and first at striker. This version is better than his Road to the Final card (for now), but since many are bullish on Liverpool that may not last forever. Nevertheless, you’re still getting a Salah at striker even if that occurs. This is the best card of Team of the Week 14 by almost any measure.

Here is the breakdown of his card cost:

Hernandez’s base gold is cheap and a 76 overall, so it’s not really in the conversation here. Instead, his last in-form at an 81 overall and this one at 84 overall are the two worth looking at. The pace upgrades are minimal between the two versions (he doesn’t exactly need more pace), and he also gets +3 agility, +2 balance, +3 reactions, +3 ball control, +3 dribbling, +3 composure, +4 interceptions, +3 marking, +4 standing tackle, +3 stamina, +3 strength and +3 aggression.

We are at five versions of De Bruyne now. They are all either CAMs or CMs, and they include his base gold, Team of the Year nominee (92), Road to the Final (now a 93), his first in-form (92), and now his second in-form. This is officially the best version, but depending on your patience and belief in Man City, it may not be forever. Interestingly enough, I don’t think he’s worth than the Road to the Final card, but he provides enough of improvements elsewhere to be recommended over the other versions.

The prices as of now:

People with Coutinho’s Ones To Watch card know this is his second in-form update of the season (he’s the first to get it) so this is a +1 from his last in-form at CAM, and a +2 from his base gold card now. His base gold card is 18K, his OTW is 175K, and his CAM in-form is 320K. Rarity and being a CAM obviously help him more than even an OTW update. For Coutinho, this is now his best card, but it’s a by-the-book update. You get +1 to +2 in most every category from his 87 overall CAM.