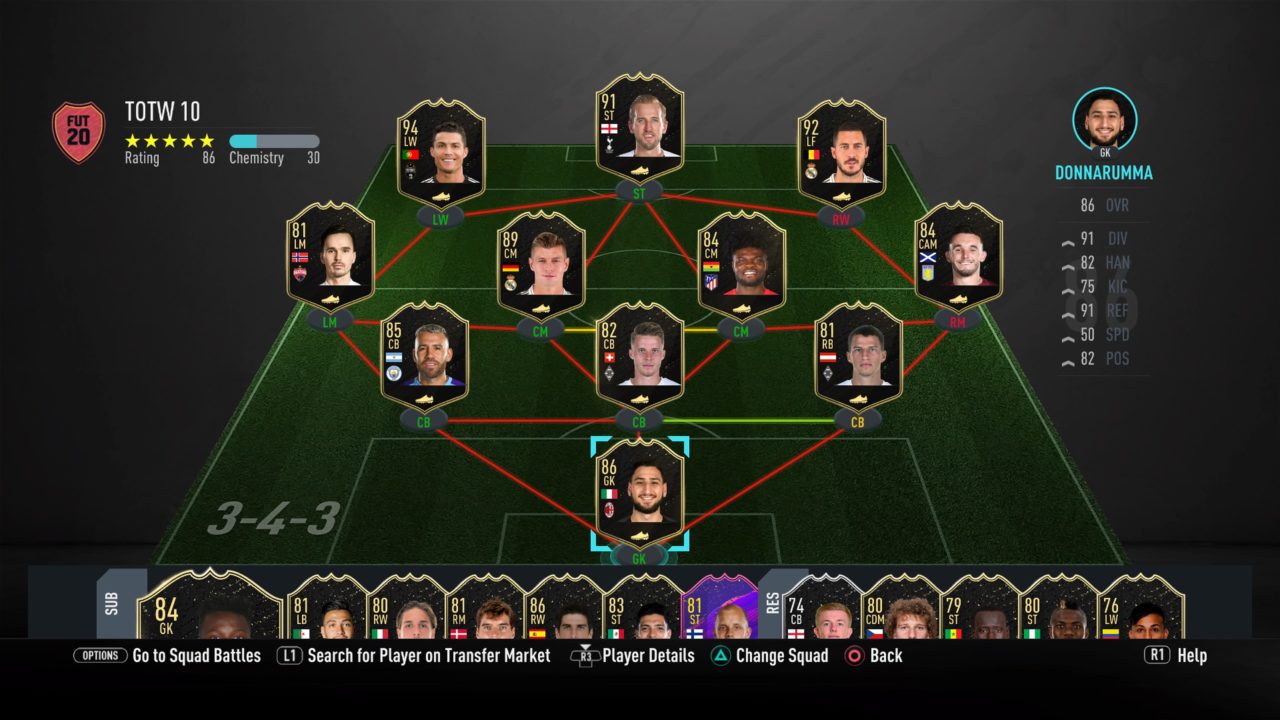 Team of the Week 10 was released today, and it didn’t have a ton of surprises, which is a good and bad thing. It means a lot of investments paid off for those who believed we would get a Hazard Ones To Watch upgrade (if you sold quickly), but it also means it was a very top heavy Team of the Week, which won’t provide a ton of value elsewhere.

As you can see, that forward trio is the story of the Team of the Week. We get Ronaldo, Harry Kane and an OTW-upgraded Hazard. Those are three amazing cards, but again, they were mostly expected and there’s not a lot of great cards elsewhere. This isn’t me complaining, it just means there’s going to be lots of sad faces when people are packing almost anything else from this Team of the Week or not getting those selections with their red picks from Weekend League.

Looking at each of the heavy hitters:

With Ronaldo you get a +1 in pace, +1 in shooting, +2 in passing, +1 in dribbling, +1 in defense and +2 in physical. Looking a little more closely, it was a +1 in sprint speed, +1 in finishing, +2 in short passing, +1 in composure and +1 in dribbling. His card is obviously insanely expensive either way, and it will be interesting to see if it’s about 1M more than his gold like Messi basically was last week for his TOTW.

With Harry Kane, this is his second Team of the Week so there’s a couple versions to compare him to. I’ll still look at the base gold version to keep it simple. In comparison to his normal gold, you get +3 pace, +2 shooting, +4 passing, +3 dribbling, +2 defense and +2 physical. His first Team of the Week card was sitting at about 70K, so it will be interesting to see if maybe you can get some deals on that if you’re not going to want to spend for this latest Team of the Week. Overall, this card should be a little quicker, a little stronger on the ball, and it remains a good link with the Jamie Vardy SBC, which many are still using in their lineups.

Now with Hazard, a lot of people don’t like him how he plays this year in-game. His OTW card also got over 1.1M coins so those two factors working together means he was still over-invested and over his head in terms of price. His price has already started to come down, and I imagine that will continue. Nevertheless, in comparison to his base gold card, you get a +1 in pace, +2 shooting, +2 passing, +1 dribbling, +1 defense and +1 physical. This equates most notably to a +1 in acceleration, +2 in finishing, +2 in short passing, +1 agility and +1 ball control.

Elsewhere with the Team of the Week, Thomas Partey getting a TOTW has at least momentarily stunted his Road to the Finals card. That had pushed close to 200K and has come back down into the 175K range. Many still assume Atletico Madrid could go far in the Champions League so his RTTF card will rebound, but it does hurt investors short term.

Toni Kroos is another player to at least mention, but the thing with Kroos is if you want to make a splash on him, you still would want his Scream card. It has 75 pace to the 46 pace on his Team of the Week card. The TOTW card does have slightly better shooting attributes, but it’s probably not worth the downgrade elsewhere unless you get a very good deal on it compared to his Scream card.

Beyond the Team of the Week, the FUT folks also dropped another Flashback SBC in the form of Paulinho. This card’s price is at about 170K right now to complete the three challenges. It does provide some potentially interesting links as a CSL Brazilian, most notably Scream Hulk, Flashback Mascherano or the the Johnathan CSL League SBC.

Compared to his base gold card (84 overall), you get +5 in pace, +4 shooting, +5 passing, +4 dribbling, +4 defense and +4 physical. I don’t think it’s bad value at 170K but it’s more specific than the Gnabry SBC I talked about in an earlier FUT update. I think unless you have particular links to other players you really want to use, this Paulinho becomes less interesting.

Lastly, there are two other SBCs to quickly call out. One relates to the CONMEBOL Libertadores news and costs about 5K to complete if you start from scratch — you get a Premium Gold Players pack from it. The other is the El Corner Kit, which will net you a kit if you want to knock it on on the cheap.

That’s all for now, good luck with your Weekend League and Division Rivals rewards in the morning.