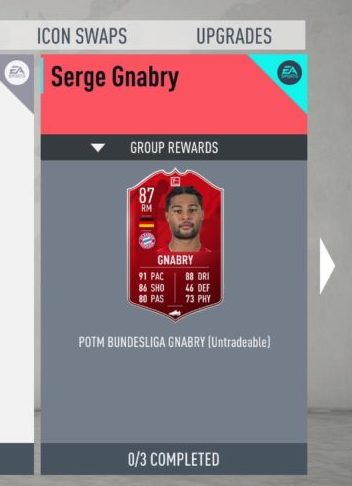 Serge Gnabry was named Bundesliga Player of the Month, which means FIFA 20 FUT has added him in the form of a player SBC today. As of now, the SBC is three challenges and will cost roughly 175K to complete if you start from scratch, according to FUTBin.

The Gnabry SBC is interesting on a couple comparative levels. First, comparing him to his base gold card, it’s a +3 in overall (87 overall). This equates to +1 in pace, +4 in shooting, +5 in passing, +3 in dribbling, +3 in defense and +4 in physical. Some will be disappointed that it’s only a +1 in pace, but he’s starting from a high threshold as is in that area, and more what this upgrade does is turn him into a more complete offensive threat. He still only has 78 stamina in this upgrade, so you would probably want to look at a chemistry style to improve that number.

The other card Gnabry’s should be compared to purely because of the timing is the Matteo Politano SBC that you could get by completing certain gameplay challenges:

I think both cards have their place, but obviously if you don’t have 170K or are looking for specific links on the field, Politano may make more sense. Either way, I think this is fair value for a player of Gnabry’s stature, but the Jamie Vardy SBC being so cheap (potentially by mistake) has perhaps thrown those calculations off for some. 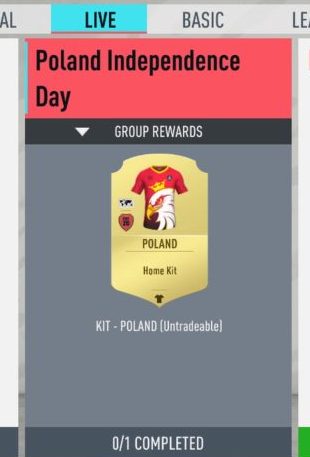 The other SBC is jersey related, with one minor and cheap challenge needing completion to get a Poland kit. This was EA’s way of giving those in Poland some love for celebrating their Independence Day last week.

Team of the Week is on tap for tomorrow, so we’ll be back for that.