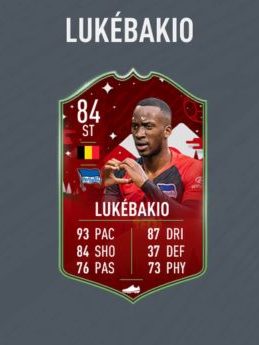 The second day of FUTMAS was more controlled as there was nothing beyond FUTMAS taking any of the shine away from it (for better or worse). We got two player SBCs and a generous puzzle SBC to round out the day.

Starting with Lukebakio, the three challenges cost about 150K total from scratch, according to FUTBin.

The challenges are straight forward, but it’s a relatively steep price to pay for a pacey striker. I’ll be back later today with reviews on this card and the Malcuit below.

Kevin Malcuit is just one challenge and will cost about 125K to complete from scratch, according to FUTBin.

Again, it seems steep to give up a team of 86 overalls to get an 84, but Malcuit does fill a need in Serie A. But again, I’ll wait for the reviews to give the full breakdown.

For those who are frustrated by the player SBCs, the puzzle SBC is slam-dunk value (costs about 8K from scratch, according to FUTBin), but it may be a little hard to decipher without players with loyalty (at least I struggled until I used players with loyalty).

I did this the way I do most puzzle challenges and built through the middle with common nations and leagues. From there, I used the outside midfielders/backs to satisfy the leftover conditions.