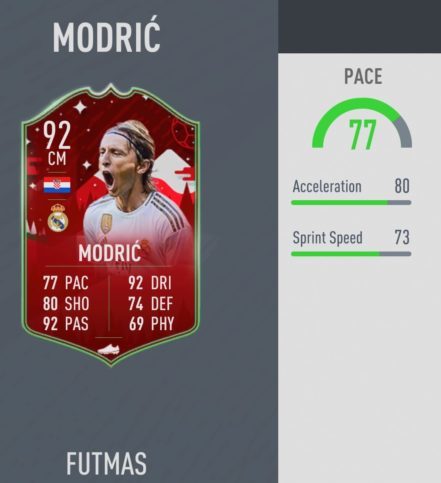 I won’t be going as deep with these reviews as usual because there are loans for both Atal and Modric so you all can try them out easily enough. I also think their value is self-evident and the cost evaluation is good this time around. There are decent packs tied to these players, and they’re both good players. In other words, it should be clear cut if you want these guys or not based on who they already were.

That being said, I still want to go over some high-level things with Modric and Atal.

Atal is clearly the best RB in Ligue 1 with this update. His in-form sadly was not at RB, so it’s good to get this version. He’s the fastest, has the best defensive ratings and his physical ratings are only behind Meunier. Being an Algerian on Nice means his links can still be awkward, and his high-high work rates are not ideal, but he’s the pick at RB if you want to use a Ligue 1 team.

At 79K and a Jumbo Premium Gold pack and Prime Mixed Players pack coming back your way in the process, this is an easy yes for me.

You’re either in or out on Modric at this point based on who you use and the style of play you believe in this year. I like Modric because I like playmaking more than pace for my midfielders. However, this card’s ratings are not so different that he’s in any way going to be a different player now. His strengths are still his strengths, and his weaknesses are still his weaknesses. If people have been using Modric all year, then this card makes sense.

For example, I already liked his 91 overall in-form, but I’ll sell that and be using this one because I’ll take any upgrade on a player I already like when it’s not much more investment. The price difference between this card and his last upgraded versions (Team of Year nominee and TOTW) are about 60K. When considering I’ll get a Prime Mixed Players pack, Small Rare Gold Players pack and a Rare Mixed Players pack on top of that for doing this SBC basically means to me it’s not much more investment to go up to the next level.

I will be taking a little extra time to look at the choice SBC that released yesterday as I think both cards seem like good value as well, but I want to actually toy around with them.