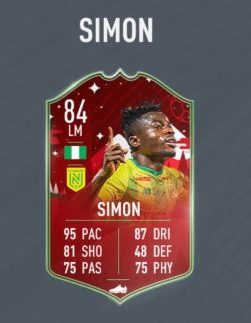 We got three FUTMAS players and  a new EPL Player of the Month to check out, so let’s scope them out.

The Moses Simon FUTMAS card is a +9 overall from his base gold card, so it’s basically a new card. He has a five-star weak foot and four-star skill moves. He also has medium defensive and attacking work rates.

The underlying elements are what makes this card rather awesome. Getting a five-star weak foot from a speedy midfielder/winger is a great starting point. As a Nigerian in Ligue 1, it’s not the easiest player to link, but a lot of people at least have an Osimhen to get things going.

Everything else still begins and ends with pace, but again, that’s why the weak foot and skills are so great. He’s so quick on the ball, and can turn in such tight spaces with 98 agility and balance that you can keep the defense guessing since you can turn and fire with either foot. That he also has 99 jumping is fun, although it’s still not a huge deal. The shot power being 87 also opens up some opportunities for long shots while cutting in off the wing.

This may “just” be an 84 overall, but this SBC at 50K is worth doing in my eyes, even though you obviously have some other incredible winger options in Ligue 1.

He has four-star skills and a four-star weak foot with the leadership and solid player traits. He also has high defensive work rates and medium attacking work rates. The other thing with Witsel is there are not a ton of great CDM options in the Bundesliga. You have Kimmich, Goretzka and that’s about it before talking about Witsel.

Witsel is a true CDM as well. He’s not someone you want pushing forward, and his passing works from the back because he’s got great passing for short and long distances. He’s not incredibly pacey, but as a CDM a 74 pace is perfectly cromulent. He’s also 6-foot-1 so he’s not going to be bad to have around to clear dangerous crosses. Overall, you would want to double down on his defending stats and turn him into a roaming tank who can intercept passes and quickly start counters with great passes into space.

We’re two for two so far in SBCs here because this one also appears to be worth 50K if you’re rocking a Bundesliga team.

Gbamin is the player objectives card, so there’s not such a time crunch to pick him up. I think some people will look at the stats and think he’s Kante-lite, and in some ways he is, but he still has some weaknesses. But first off, this is a +5 overall update from his base gold card. So like with Simon, this is like rocking a new card.

He has three-star skills and a three-star weak foot, plus high defensive work rates and medium attacking work rates. As an EPL player, he’s relatively easy to link because, well, the EPL is just popular. He’s also 6-foot-1 like Witsel, which is a plus as a CDM.

As for the card itself, the pace immediately stands out for a CDM. Yes, he is faster than Kante, but this agility and acceleration are still worse than Kante. On top of that, his balance is terrible compared to Kante. However, one thing this card has over Kante (beyond sprint speed) is he should be a more dangerous shooter from long distance. This is not inconsequential because you don’t need Gbamin pushing forward anyway. He’s also a perfectly acceptable passer, and he has 86 strength (also beats Kante by a wide margin there).

It’s a player objectives card, so really it’s just a matter of time spent if you want him. I do think he’s a good player, but I think his stats are somewhat deceiving in terms of his overall value.

Mane, Mane, Mane. The packs are not great for this player SBC, and I just have overall Mane fatigue now this week. Your best course of action with Mane (if you want him) is just go back to basics and get the gold card for now. No, it’s not on the level of this card, but Mane just is not worth 800K for this SBC. And the thing with Mane is if you want to go a step up, then get one of his in-form versions. The Road to the Final card is well over 1.5M coins so that’s the option above this one, but he’s on Liverpool so that’s why the RttF is so pricey.