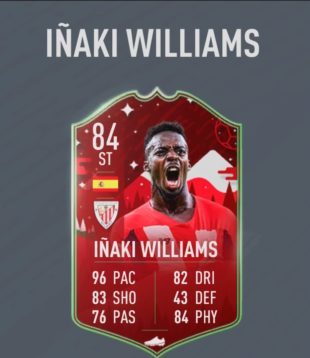 The SBCs were cheaper overall this go around than at any point outside of day one of FUTMAS. It does not necessarily mean all the cards are worth their “cheaper” prices, but at least there’s no crazy requirements to pick these cards out. So let’s get to it.

Inaki Williams scares me. In fact, one of the toughest players I have had to deal with this year is Inaki Williams. I know it sounds crazy, but one of my opponents position changed Inaki Williams to a CM and used him to just bum rush down the field against me one game. I was so thrown off by the pace in the midfield, that I ended up needing to win a crazy 5-4 game, and really it was only because Williams tired out by the end. The pace is real, and so it’s why I was stoked to try out his loan card.

His base gold card is only 1K, so you’re paying 66K more for some decent upgrades, but I don’t think these changes have fundamentally altered how I feel about the card. He’s still awesome, he’s still a little slow when turning, and he’s still a little “glitchy” like Rashford in terms of keeping the ball even though it seems like he should lose it. His ball control only being 78 just does not hurt him as much as the agility does for whatever reason — maybe it’s because he’s a rather big striker.

On top of that, the weak foot being two stars scares some folks, but it’s never really been a problem for me with his card. He’s a dangerous finisher, and his straight-line speed and muscle on the ball means you don’t have to struggle too hard to keep the ball on his strong foot. Overall, this card is good, but I don’t think you need to upgrade to this version to get a good Inaki Williams experience.

Edinson  Cavani is an interesting case study in whether EA was throwing us a bone with this card or they just know he’s not used very often this season. His cost is just 42K, and that dips further if you have some untradeable guys to use. The 4-D chess move here is you get rid of some of your untradeable in-form cards and then you have an 89 overall for a future SBC at a lower cost than even normal Cavani would be at 29K. I’m not saying to do that, but it is funny that technically it is a play here.

He’s a three-star skills, four-star weak foot striker with a 6-foot-1 frame and high-high work rates. He also has the power header trait.

There is no loan for this player, but the upgrades over his 19K card are very minimal in total. Nothing about this changes anything about Cavani. He can rip it, and the ball control plays because he’s larger, but he turns like a tank and does not have any pace. His passing is not elite either, which is why I tend to avoid him. I would use him if he were able to hold up play and make things happen in multiple ways, but this version just can’t.

So yeah, the 4D chess move of doing this SBC to have an 89 overall for a future SBC really is not the worst use for this bad boy.

On the heels of Murillo for day four of FUTMAS, Diego Carlos looks like another promising addition to the CB position. We’re starting to get a little more influx of pacey CBs, and that’s a good thing considering the sort of speed we’re having to deal with on attack. Here you’re getting a card that could get upgraded if Sevilla moves on, and it’s a unique fit as a Brazilian on Sevilla in La Liga. The cost at 68K is not too terrible either. In short, you have a nice combo piece with Militao if you want it.

You know, leave it to EA to make the best card so far — when factoring in price point — a Road to the Final card rather than a FUTMAS card. Be that as it may, I do think this is the best card of the promo so far. A green link to Militao is fantastic, and there are other good Brazilian defenders he can tie in with as well. Beyond the links, base 90 strength with his general pace and aggression are a killer combo.

He’s the exact type of CB you need in this meta, and it’s a real nice opportunity to get a card into your rotation that even has upside potential with future upgrades. Sevilla is one of the favorites in Europa League at this point, so I would expect if all goes according to plan that this card is going to get at least one more upgrade. Considering the fact that this card is already playable, that is incredibly enticing. I do think some people still have someone like Road to the Final Juan Jesus on their mind as well, as they should as his one amazing upgrade turned him into a card that skyrocketed on the market. Now, obviously Diego Carlos will be untradeable, but the point is these Road to the Final cards can really pay dividends on and off the pitch if you stick with them.

The only true bummer with this card is you can’t get him on a loan to take him for a spin.