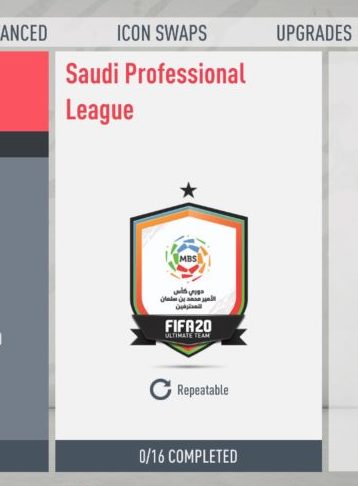 The FIFA 20 FUT team is making up for lost time I guess as after not introducing any league SBCs to start the year, they’ve now delivered three in the last week. This time it’s the Saudi Professional League getting a league SBC. Again, it’s not the flashiest league, but let’s see if the players are worth checking out.

First up is Matías Aguirregaray, a speedy RB with medium defensive work rates and high defensive work rates. As a player from Uruguay, he does not have great links to meta players, but could at least link to RttF Lucas Torreira in the midfield and Diego Godin at CB. He has 92 sprint speed, 87 acceleration, 80 agility, 86 shot power, 84 crossing, 83 short passing, 74 long passing, 81 curve, 85 balance, 82 reactions, 86 ball control, 81 composure, 84 interceptions, 87 standing tackle, 85 strength and 95 stamina.

I’ve been partial to RttF Mbabu as my RB — in part because he was a challenge to acquire — but this Aguirregaray is certainly no slouch. He will be calm and sharp on the ball, he can bomb down the wing, and he can probably even take corners and be a very worthwhile player when crossing it into the box. This is a legitimately good card, and you can do this league SBC for 75K from scratch right now, according to FUTBin, which makes him very good value.

He has 99 agility to go with 85 balance and solid finishing so this is by no means a bad card. He will be really enjoyable to use on the ball, and he’s not the “wrong” pick if you go with him. In fact, I would say this may be the first choice SBC I do twice because I think both players are simply good value.

The packs attached to completing each of the teams are mostly silver or silver-related, but that should still bring the cost of this SBC down even that much lower.

Elsewhere in SBC land, we got two Live SBCs that relate to UCL Blues. UCL Blues have basically been the same price as the normal golds for these players because they have the same attributes, but at least for these small SBCs they are required.

For The Tension Mounts, you will need one UCL Blue rare, a chemistry of 80 and a squad rating of 78 to get a Prime Gold Players pack.

For Eyes on the Ball, you will need two UCL Blue cards, a squad rating of 75 and a team chemistry of 75 to get a Premium Gold Players pack. Again, neither of these SBCs are challenging so those who have invested in UCL Blues still are not getting any big payoff, but it shows the FUT team has at least remembered UCL Blues exist.

If you are chasing down Season Objectives, there are three new ones that relate to UCL Blues as well. Two challenges take place in Squad Battles and one takes place in Rivals, and they basically amount to scoring and assisting on goals with UCL Blues. One does specifically relate to scoring with La Liga and Ligue 1 UCL Blues, so take that into account as well if you’re trying for every little bit of XP.