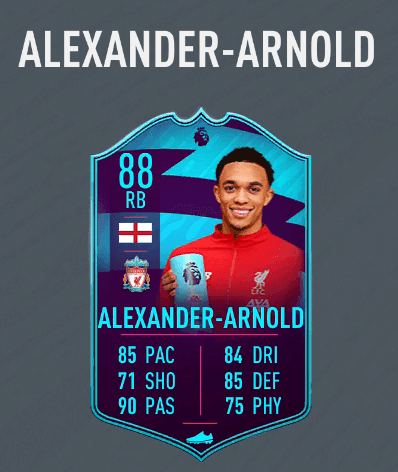 The final day of the Team of the Year is winding down with not much new and exciting content. It seems like the FIFA team is ready to move on to the next thing in FUT. We got one (bad) TOTY puzzle SBC, and an Alexander-Arnold SBC for being named EPL POTM.

Price: Roughly 228K, according to FUTBin

Quick Analysis: I already spoke about the Alexander-Arnold TOTY card, but this SBC fits into a different portion of the market than that card. This card is probably not quite as good as the in-form Kyle Walker, but costs about 50K less. Considering you get two okay packs back, this might make some sense to do. You get a great EPL RB that is only going to be behind maybe one to two cards right now in the EPL, and you can use some untradeable cards to offset the cost. I think this SBC is marginally overpriced, but considering where the card fits into things right now, it’s mostly fair value.

Cost: About 3K, according to FUTBin

Quick Analysis: Yuck. Yes, it’s easy to do, but it’s a bad pack and it’s untradeable. It’s a bummer to see the final day of this promo have such a lackluster final pack, but oh well.