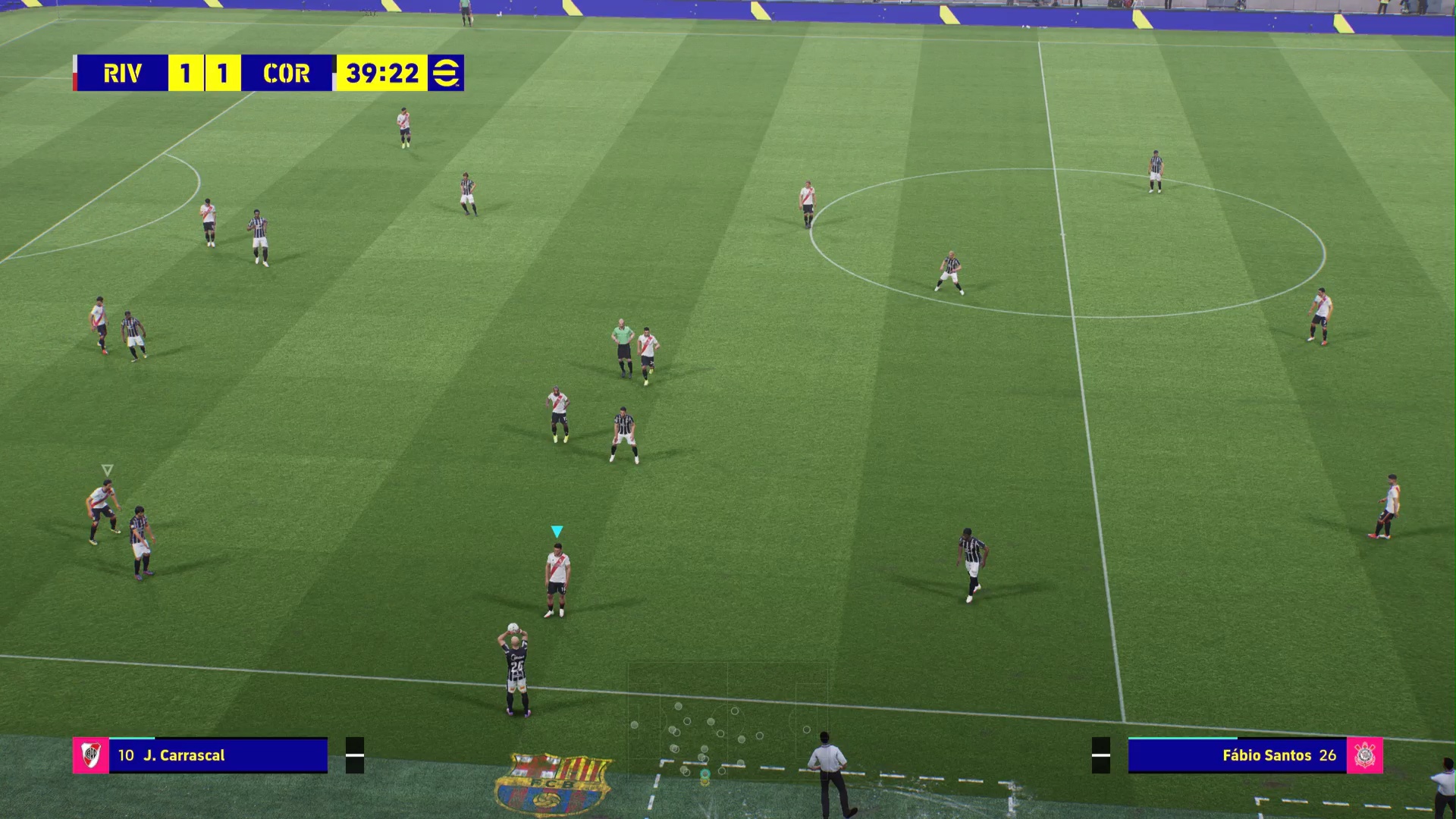 eFootball 2023 is a significant improvement upon its predecessor eFootball 2022, but it’s more complicated than that. First things first, eFootball 2023 isn’t exactly a brand new offering, which is something we’re used to seeing with sports games released on a yearly basis. It’s simply a new “Season” in terms of Events with a few gameplay updates sprinkled in along the way. If you’re in the market for a footy game and you want something fresh after having experienced eFootball 2022, then 2023 is simply not for you. As you’ll soon find out, there aren’t a lot of areas where Konami improved the game enough for it to be considered a new experience. There are, however, a few areas that I’ll touch upon that have been tweaked since the original free-to-play version was launched. In other words, stick around for a little bit and find out if things have changed for the better in this eFootball 2023 review.

What Has Not Changed

Well, for starters, the same modes that have been available for the past few updates are still the only way to play eFootball. That means there are limited options available offline for those who like to play against the AI. Sure, there are Starter Events versus the AI where you can gain GP and other rewards, but apart from weekly rotating league challenges (Premier League, La Liga, etc.), Konami is still pushing people towards online play such as League Play and Worldwide Clubs. In these modes, the action is highly repetitive and quickly becomes stale as you realize that once a new Season begins you end up matching with super teams in the lower divisions. While it’s enjoyable to get the best of these costly super teams, there are a lot of folks put off by playing against these teams if they are just starting their eFootball voyage.

The staples of PES, Edit Mode and Master League, are still a ways off as Konami once again sends their penalty kick into orbit and misses out on a chance to lure soccer enthusiasts in before FIFA 23 releases.

While improved upon since its initial release, referees in eFootball 2023 are mostly just bystanders as they watch defenders get overly physically with attackers without a threat of being called for a foul.

With the balance in this most recent 2.0 update (more on this to come) being heavily skewed towards defenders, the risk/reward that was so well done after the 1.0 update is no longer there. The most common way of defending is just to barge in and spam the tackle and/or shoulder barge.

Online lag and Konami go together like Jurgen Klopp and high defensive lines. Despite being a game that focuses on the esports experience and bringing players together across multiple platforms, the lag experienced online can quickly sour things as you not only battle your opponent but also the game with input delays and momentary lapses. Compare this to playing offline and the difference is night and day with offline play being remarkably smooth and quick. eFootball 2023, like many other games, suffers from dubious cheaters. But with limited ways to play and a game that is bent on providing crossplay, it fails to deliver a stable online experience.

While the online experience leaves a lot to be desired, one way in which Konami could really help itself is to feature more online matchmaking filters, particularly pass support options. In any online soccer game, some players will choose the most assisted levels for passing, making the game feel like ping pong as players one-touch pass their way up and down the pitch. One can argue that this is a way to minimize online lag, but this argument quickly loses steam when you come across people with five-bar connections where there is no excuse other than laziness. For far too long manual players have wanted to play with like-minded players, but they are forced to run the risk of random online matchmaking.

For those of us who enjoy good gameplay and great visuals, eFootball 2023 is a mixed bag. I’ll touch on gameplay shortly, but for now I’ll focus on the graphics. To put it bluntly, they’re still a letdown. Player faces and models aren’t the issue here, so you’ll hear no complaints from me on that front. However, the grass is the first thing I notice in any footy game once a match starts, and it’s PS3-level quality.

While some of us have become accustomed to enhanced grass/turf mods, being forced to play on grass that doesn’t resemble anything like what we see on TV is disappointing. Crowd visuals are still below average as well with several models copied throughout the crowd for those rare instances where you actually see them. Perhaps it’s the price we have to pay for crossplay, but in the end all it does is give ammunition to the crowd that believes this is a mobile port and/or suffering due to including mobile players.

If there’s one thing that Konami prides itself on, it’s gameplay. The company that likes to do the talking on the pitch has seen massive swings with each and every data update. eFootball as a game has come a long way in terms of gameplay. The disaster that was the Online Performance Test/original release has been improved upon, but for the purpose of discussion, this section will focus on the gameplay in Update 2.0.

When compared to the original release-day gameplay, it’s night and day. When compared to 1.0, it’s more sundown than sunup. The dribbling that so many including myself loved from 1.0 had a nice balance with a defense that made you actually defend with timed challenges.

In 2.0, the pendulum has swung to the defense with overpowered tackles that offset the dribbling, which mechanically still feels as good as it did in 1.0. Being able to ride challenges with certain players was not only fun but necessary for a couple of a reasons. First, it helped you beat the first man and either open up some space to dribble towards goal or open up a better passing angle to advance the ball via a forward pass.

Version 2.0 sees even the strongest of players get pushed off the ball with the slightest contact unless you use the shield command, which still looks a little awkward. The lack of balance I mentioned before makes the most common way to beat a press come via one-touch passes that then speed the game up. This then results in end-to-end action. Throw in a little lag online, and the game rewards people for playing this way as opposed to playing at different tempos. Offline is better in this department because not all AI teams press — some actually drop their defense levels to light blue, making their team defend deeper in their own half.

Next up, and unfortunately it’s no stranger to this series of late, is the player and wonky ball awareness.

Not only are there too many times where the ball freedom works against you like the example from above, but players also don’t seem to follow the ball. Keeping one eye on the ball at all times is a basic tenet of soccer, but unfortunately in 2.0 the players seem to not track the ball — or the game forces you to pass to players you didn’t intend on passing to. This is usually what forces many PES players to full manual, but you have to be brave to play fully unassisted online.

Far too often, your players seem to lose track of the ball only for you to manually switch to them and encounter the slight pause that your newly selected player will perform. These little hiccups are costly in a game that can be as quick as eFootball 2023 is at times. These two issues are near the top of the list when it comes to reasons why results are often variable online.

Version 2.0 isn’t all bad when it comes to gameplay. Playing against the computer in some of the AI Events is good, with its longer matches and varying AI styles that contrast to the same Quick Counter/Possession tactics that dominate online. An Edit Mode would be nice so that we could see real club names and have their official badges and kits — I usually spend at least a third of my time with eFootball playing versus the AI.

Kicking and passing animations are more varied and smoother than any other update thus far. I’m constantly seeing new animations in every match I play, and when Player ID fully comes back I think we’ll see the smoothest PES/eFootball game to date.

The foundation for eFootball‘s future has been put in place. The base of the game and its fundamentals have been set, and I envision Konami enhancing parts of the game’s mechanics (collisions, movement, etc.) while slowly re-adding back PES staples like Player ID and ball physics. Finding the perfect balance is something I imagine is hard nowadays in the sports video game genre. Gameplay patches are demanded by fans, and with the transparency that companies like EA show with FIFA‘s Pitch Notes, the fans want to see what was exactly changed to help them form their own opinions.

The ball is in Konami’s court as to what kind of game they want eFootball to evolve into. Will it be a mobile-based game with online play being the driver like it is in its current state, or will they get back to their roots with a more robust experience? Only time will tell.

Discussion
Click here to reply to the discussion
Continue Reading
You may also like...
Related Topics:efootball, efootball 2023, konami, soccer, spotlight