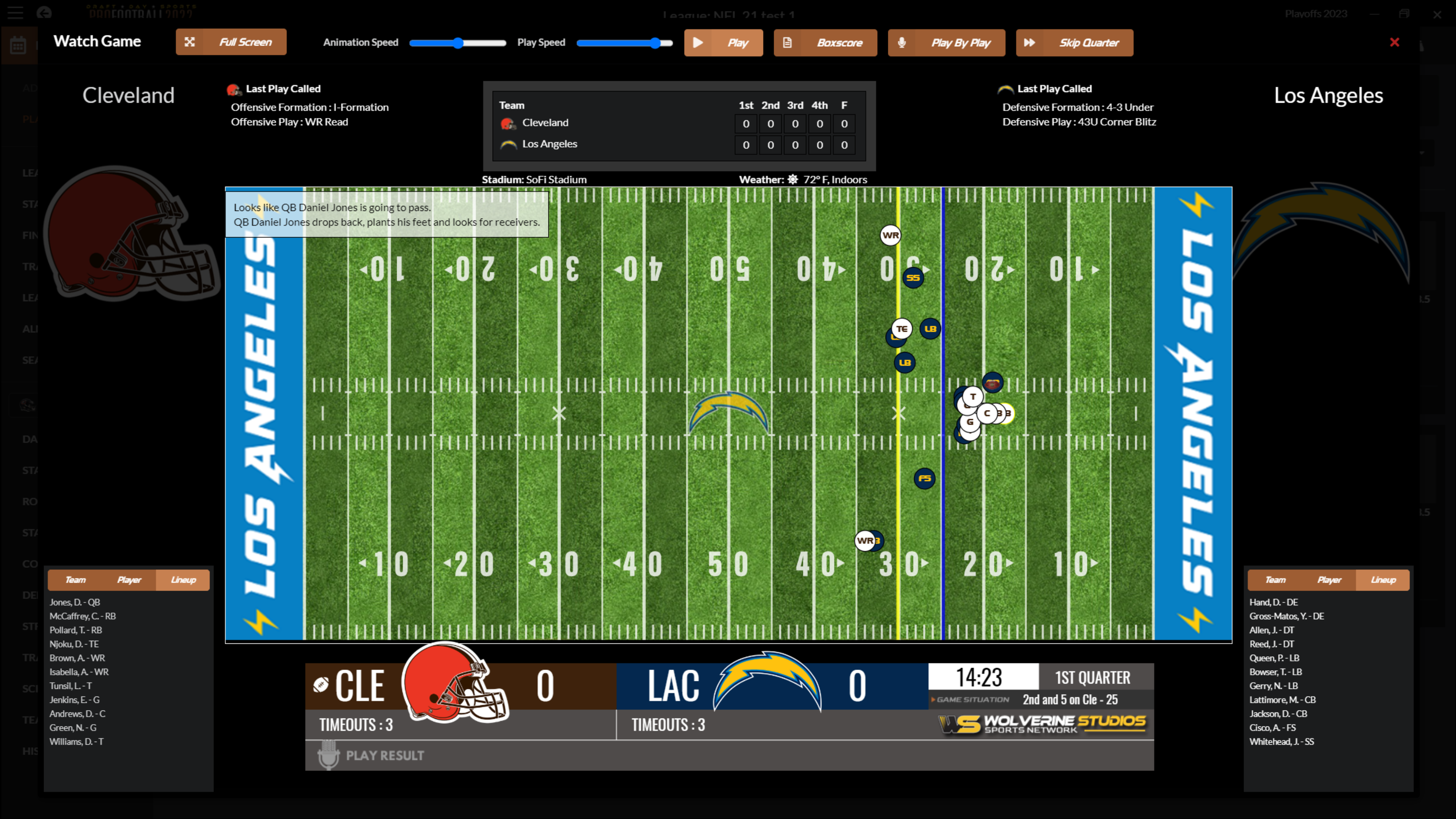 With fans always looking for alternatives in the world of video game football, independent developers like Wolverine Studios have found a larger spotlight in recent times. This year, the developers are attempting to offer an easier to use interface and menu system in Draft Day Sports: Pro Football 22. And while I will not be reviewing this aspect of the game, an all-new single-player career mode is being introduced for the first time ever.

The DDS Pro Football series has done a commendable job of evolving over the years, and the developers do an excellent job of embracing community feedback. With that in mind, let’s discuss the latest version here in this Draft Day Sports: Pro Football 22 review.

What I Like – Draft Day Sports: Pro Football 22 Review For many who have taken the leap into sports sims, a lot of the concerns that have been voiced to me over the years are about understanding them, and how to really get most of the game while learning to navigate it as you progress.

That’s a legitimate concern as games in the Wolverine catalog, or other titles like OOTP, can be daunting to take on at first. 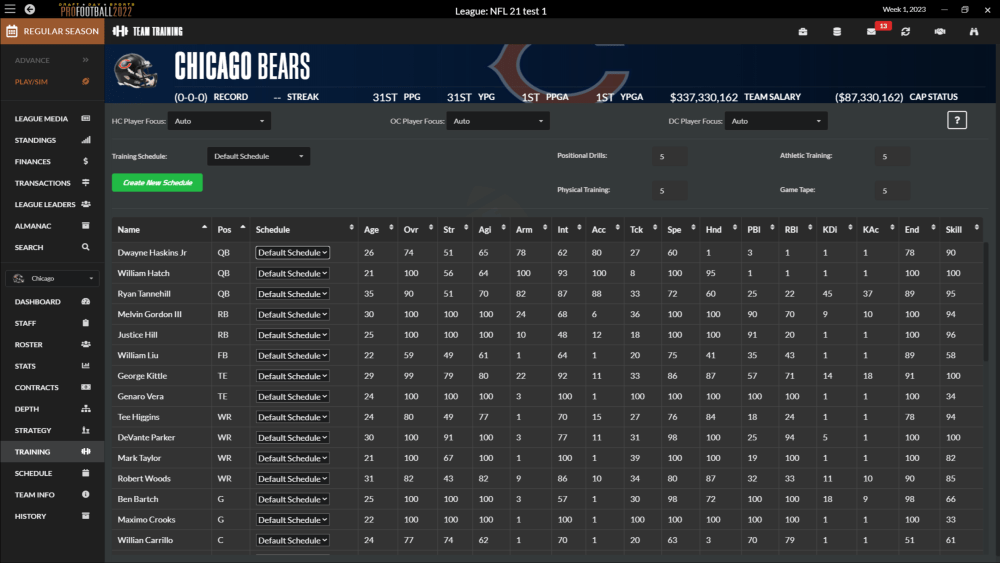 One of the things I appreciate here is that over the last couple years the developers have redesigned the user interface to be much less intimidating. The ability to navigate around the system is simple and intuitive, but it still does a very good job of placating to the sports-sim veterans

Also, once in a game (or season), the menu system does an excellent job of placing everything in front of you and making the progression to the next step all very easy to understand and initiate. The navigation system boils down to a simplistic point-and-click scenario, but as I said, ease of use does not mean mundane. 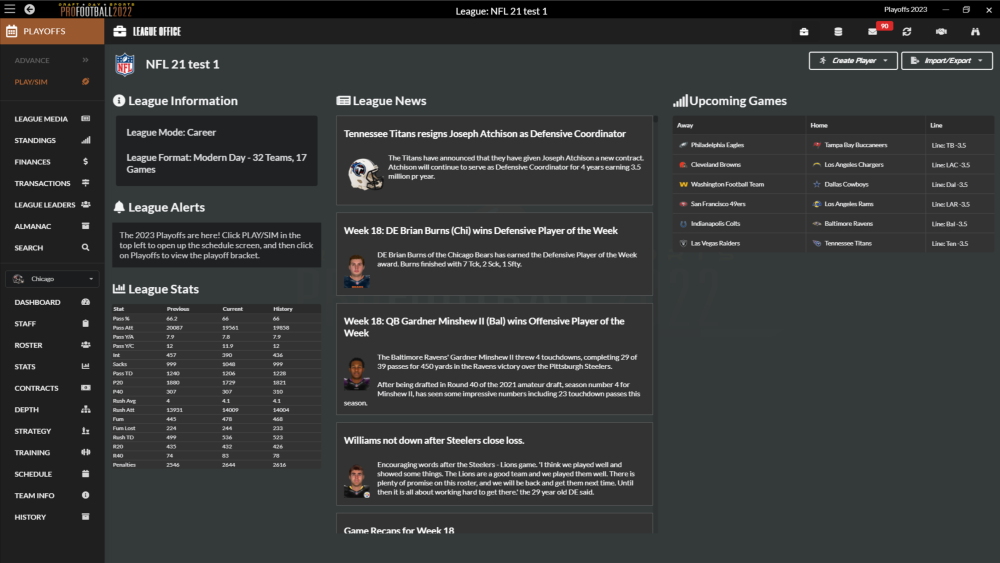 As you progress through a single game or even an entire season, you will see the information in a way that allows you to see all the important facets of the game on a single screen, with many actions utilizing a simple “point and click” system. I love this approach as I think the world of sports simulations needs to embrace newcomers by offering more ways to help ease them into this genre. We see it and heap praise on it when other genres offer it, and this approach needs to become the norm for this genre as well.

Even in the case where one may get confused or lost regarding advancing from one step to the next, the community here on Operation Sports and on Wolverine’s very own forums offer an amazing amount of quick and helpful insight on how to overcome or accomplish the task at hand.

DDS: Pro Football 22 provides everything you need to run a fictitious NFL-style league right out of the box, and it can be as enjoyable as trying to replicate the current NFL season. Many from the community play this way and love their time doing so. 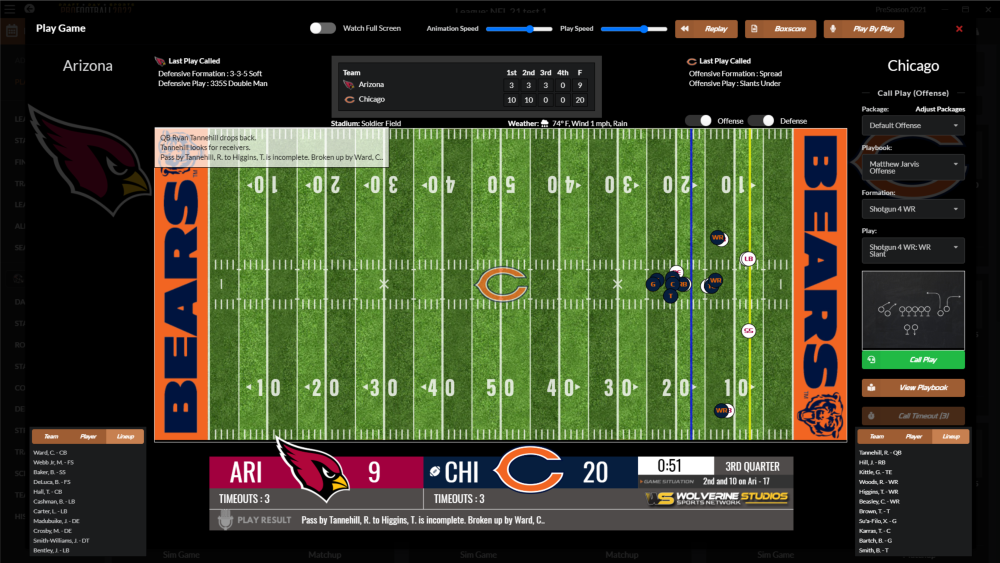 I prefer to play running with real NFL teams and players, and thankfully the community has come through again.

A user by the name of Slybelle1 has delivered yet again with the famous Pro Football Real World Mod, which replaces all the logos, field art, and team names with the actual NFL counterparts of what is available stock from Wolverine. Now, this mod does include real players, but the approach with this mod is a fantasy draft in which you draft from a pool of real NFL players and create a full 53-man roster from the draft itself.

If you prefer to do a full simulation of the NFL, then a combination of this mod and another mod from GM Games — it has accurate rosters for each team and player photo packs — will be needed.

For those who love the history of the sport, there are also roster mods that will allow you to play any single year starting from 1960 all the way to the current year in the NFL.

Again, none of these are necessary to enjoy DDS: Pro Football ’22, but they are available, and best of all, they are free to all users.

As mentioned above, the dynasty mode in DDS: Pro Football 22 allowed me to take multiple approaches.

Sandbox mode allowed me to basically play as the commissioner of the entire league and make changes I deemed necessary. Career mode allowed me to take over my favorite team, but it comes with the ability to be fired if the results do not match that of the owner’s expectations. Last, the game does include the ability to play in online leagues against each other, and in this mode there is the same freedom you experience in career mode — but just with no chance of being fired. 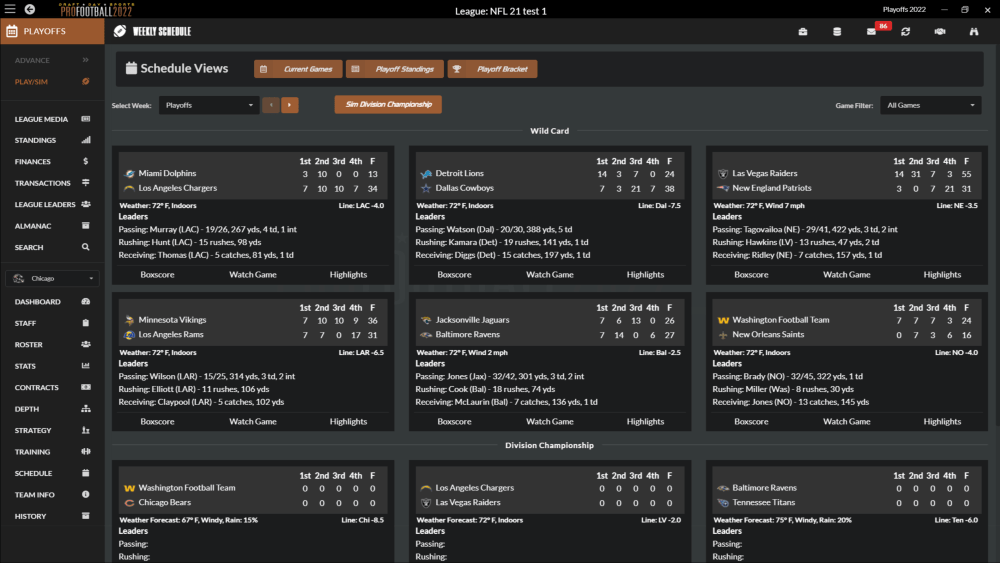 I chose career mode as I wanted to see what it was like for me to navigate through multiple seasons as a coach and GM. I also wanted to see how the AI-controlled teams made their choices, and if those choices were consistent across the board or if they changed from team to team.

I started my career mode in a studio taking part and viewing a live draft taking place. The draft experience is a lot of fun and feels relatively authentic as I had the option to make draft-day trades, visit the big board, look at scouting reports, and receive input from my staff inside the war room. 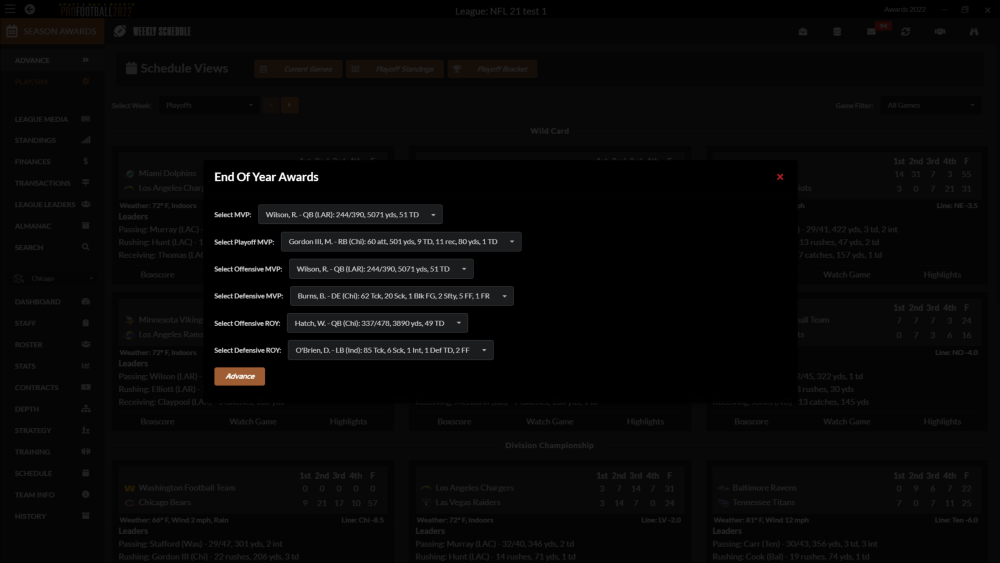 Once the dust had settled from the draft, it was time to take over the day-to-day operations of my team. Those duties included practices, injuries, depth charts, preseason player growth and regression, and coaching philosophies and game day approaches.

Part of the staff options includes choosing an offensive and defensive coordinator and making sure they fit the plan for the team. This is a very small but incredibly important part of the preseason as who you hire has a true and direct impact on the team’s overall production. 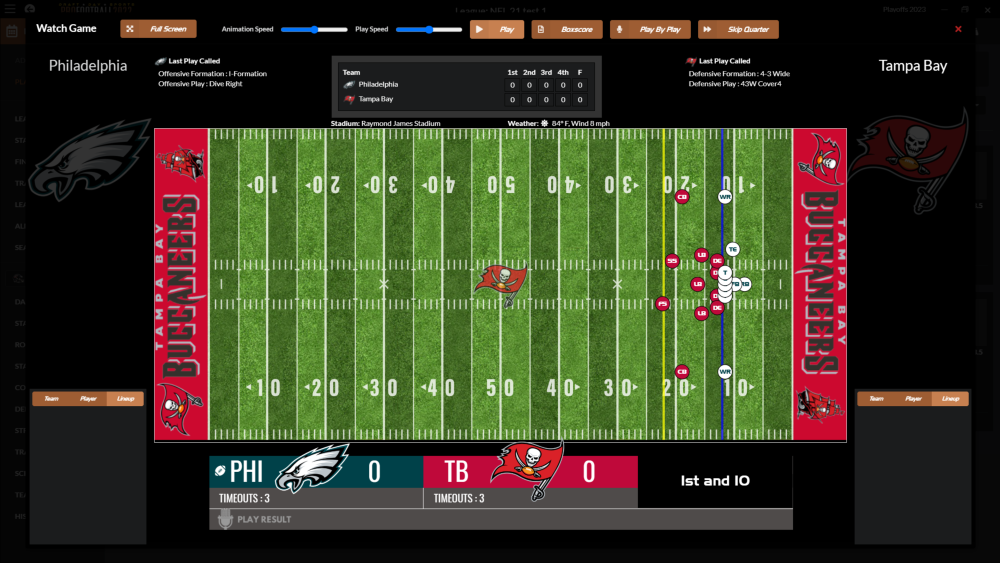 What’s even cooler is if those coordinators do well along with your team, they can be lured away by another organization as either a lateral move or a promotion to the head coaching position.

As the season progresses, you as the head coach can choose to participate in each individual game and call every single play, or you can set your game plan and simulate the entire game and season.

Throughout the season, you will deal with players not meeting expectations, overachievers, players fighting for playing time, injuries, player morale, contract extensions, and overall team energy and endurance.

It’s a lot to balance for sure, but thankfully as I mentioned before, the menu system is descriptive and intuitive in helping you navigate and understand each and every move throughout your time with the game.

Even after the season ends, regardless of where your team finishes, you will be given the option to vote for awards and watch the playoffs unfold and finish. Once the final whistle of the season blows, it is time to start all over again, running through the same process but with new faces and objectives, and often new challenges depending on who you retained and what holes need to be filled.

The bottom line is that the depth, authenticity, replay elements, and excitement are exactly what I found during my time with this title.

What I Don’t Like – Draft Day Sports: Pro Football 22 Review

The developers are aware of one of my biggest areas of concern, and that is watching my defenders on screen completely disregard the play that was called, and instead dart off in an erratic direction.

This issue pops up most often with the secondary, and while the developers have delivered updates to help eradicate the problem, it is still somewhat noticeable — just not as noticeable as during the early access phase. 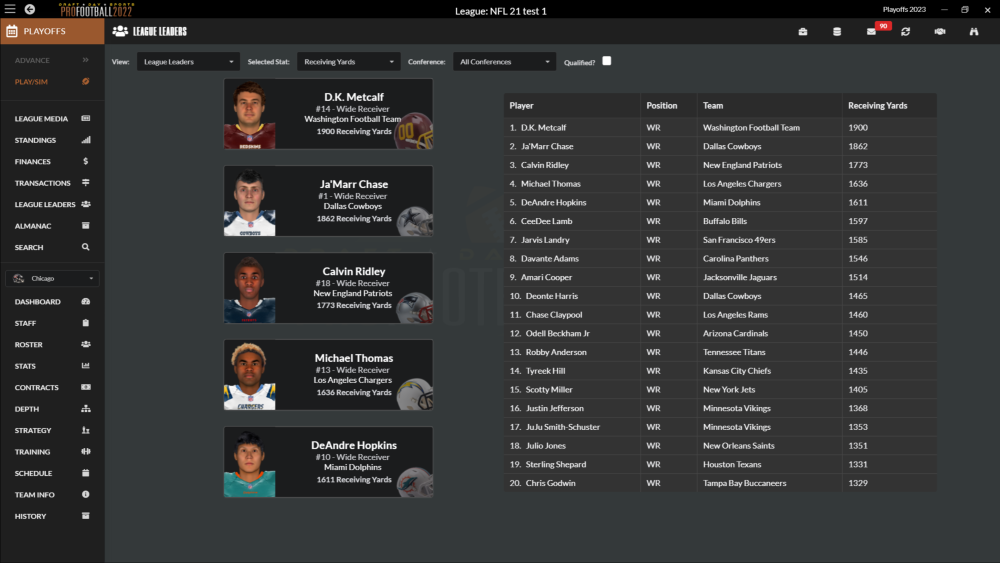 The problem wasn’t just relegated to my back four defenders either. On a few occasions, I also watched my linebackers react as if they were following a Matt Nagy game plan.

Also, through the simulation of multiple seasons, I did occasionally run into some statistical anomalies like quarterbacks with rushing yards that rivaled the best running backs, and multiple wide receivers with over 1,500 yards receiving. The receiving yards component is not a huge deal, but for reference, in 2020 only a single receiver in the (real) NFL had over 1,500 yards. However, in my fourth year of being a head coach, there were nine receivers who hauled in enough catches to breach the 1,500-yard mark. 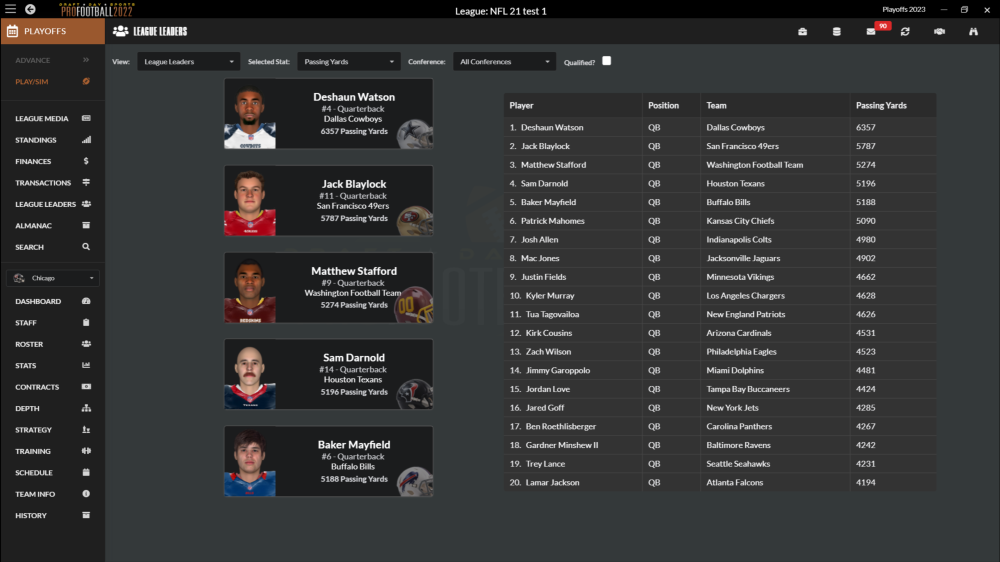 Again, is this a huge deal? I would say no, but for many who are like me, seeing inflated stats can lower the enjoyment level a bit, Nevertheless, the developers do an amazing job of understanding community concerns and addressing those concerns to the best of their ability in game with engine tweaks.

While this may be a minor issue in the eyes of many (and even me), it is still an issue. In DDS: Pro Football, the action is displayed on screen on a two-dimensional field with two-dimensional circles that represent each player currently involved in the designated play. 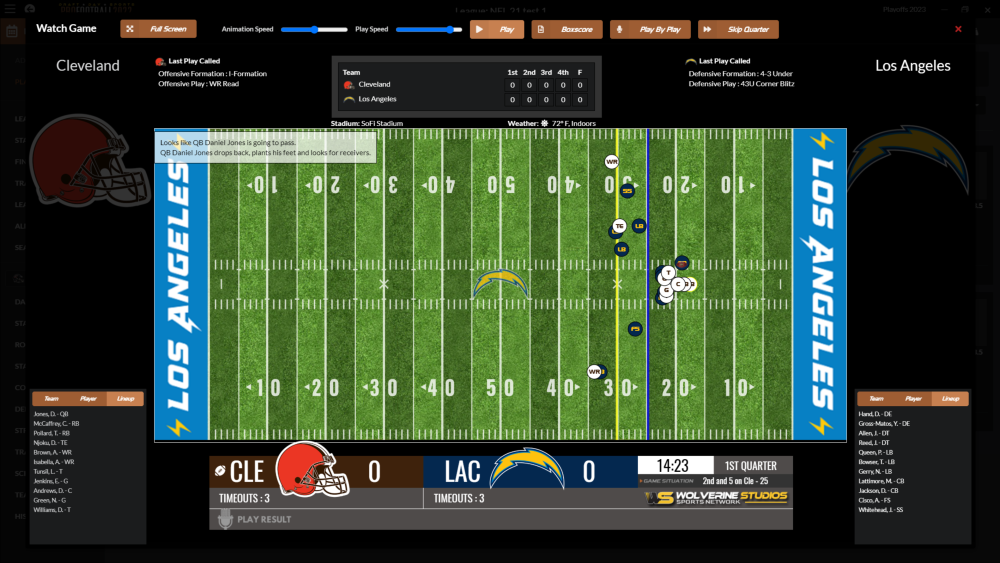 The little circles of talent move around the field in hopes of delivering a more visceral and visual experience than older sports simulations, which often only utilized text.

I have mentioned this before in previous write-ups about Wolverine football titles, and I will continue to do so. I love their sim engine, and while not perfect, it delivers some extremely realistic outcomes for both individual games and season-long aggregated stats. My wish is that they can one day deliver a visual experience where actual players move around the field, much like we see in the Pro Strategy Football series.

The good folks over at Wolverine have delivered another title that delivers a high level of fun, options, and authenticity. The game allows you to mod it up and play the style and league of your preference, and best of all, the mods are free and easy to install.

The game may not be as deep as what we would see in a title like OOTP, but these are different sports, and thus, require different approaches.

Draft Day Sports: Pro Football 22 allows you to take control of the league or a single team and guide it through the course of history, or a single season if that is more your style.

The developers have included a new mode this year that allows you to take over a single player position and run through a career, but please understand that at best this mode is in beta right now, and they’re simply testing it out to see what direction it goes starting with next year’s title.

If you are looking for a title that delivers all the thrills of running a pro franchise with real depth and choices that have a real impact on your franchise, picking up DDS: Pro Football 22 is an excellent option and an easy on ramp for those looking to enter this genre for the first time.