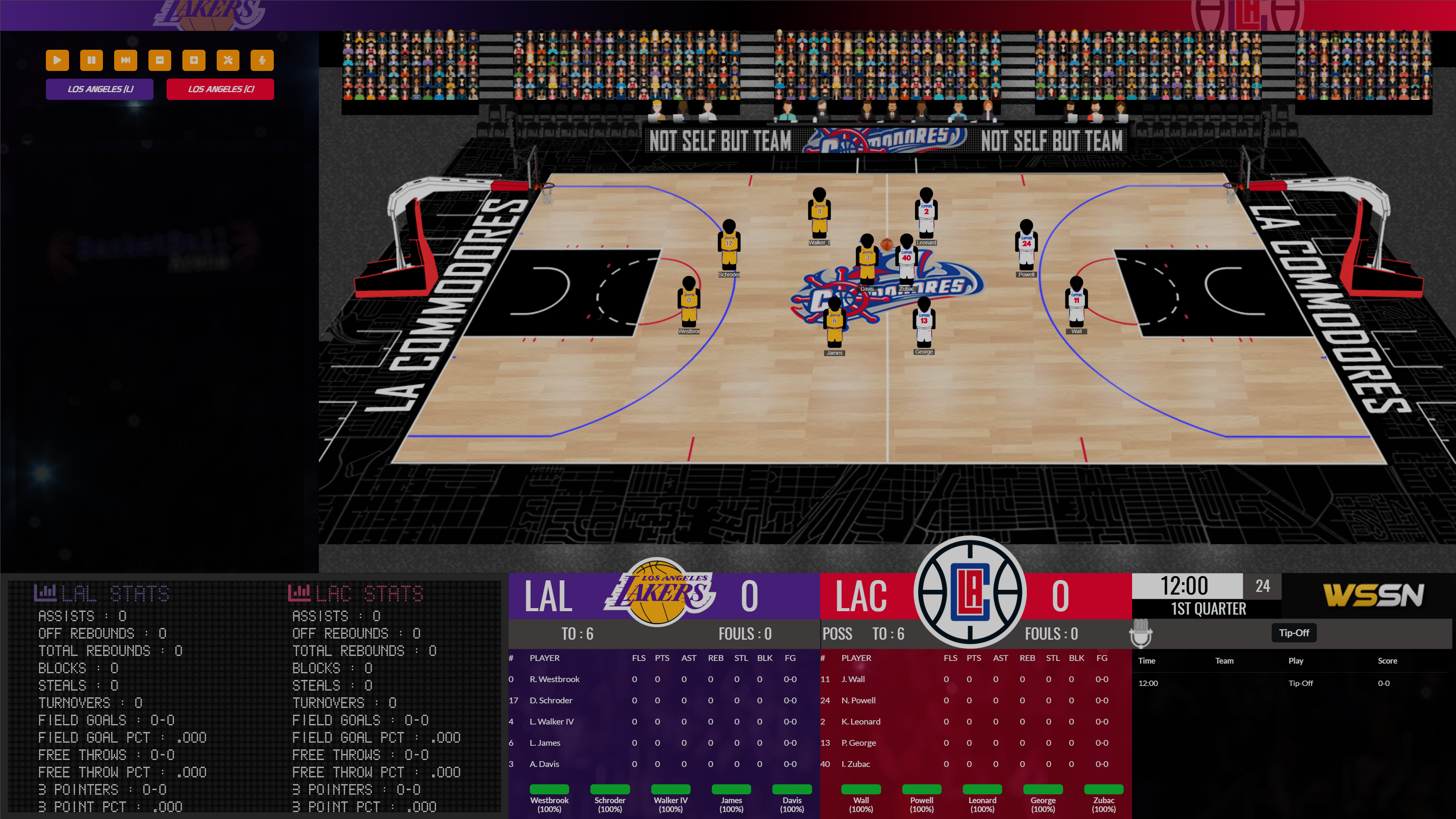 Earlier this year, I did a small preview of the new play style that Wolverine was starting to introduce into its Pro Basketball series. While it was early on, I could see its massive potential and the possibilities it brought with it. Not only did I see the potential for both of Wolverine’s basketball titles, but I let my imagination run wild and envisioned the football titles with fully rendered play models depicting the sport. While imagining all the possibilities is fun, we no longer need to go that route. Wolverine Studios has finally released the first title that incorporates the new animated player models in Draft Day Sports: Pro Basketball 2023. 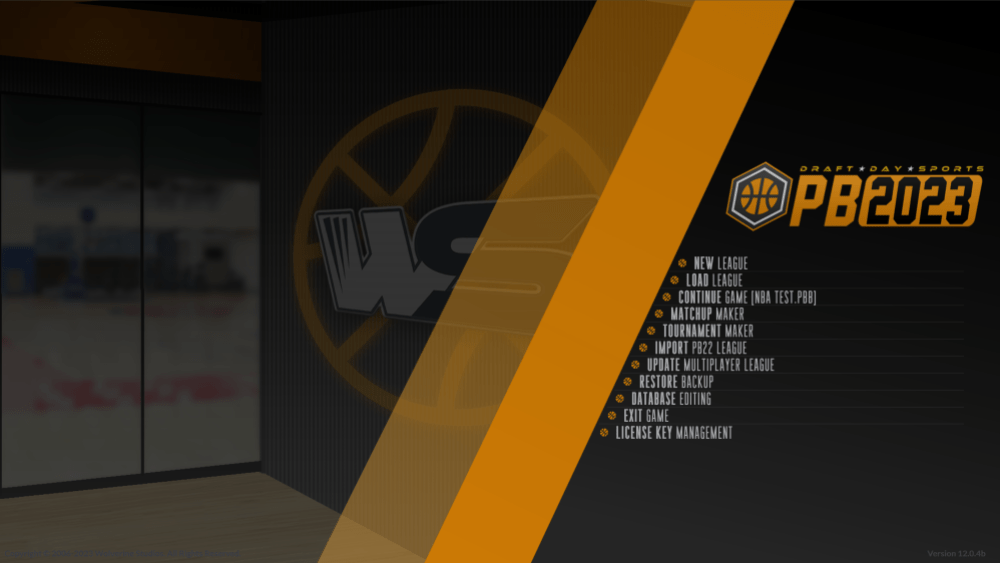 As much as I have always appreciated Wolverine’s library of sports simulations, my biggest complaint has consistently been the gameplay style. With Draft Day Sports: Pro Basketball 2023, they look to take the first step towards rectifying that problem. The question is, does the final product deliver in ways that push the boundaries of sports simulations and open up the genre to a larger market, or will it be an improvement that is casually accepted and forgotten soon after? Let’s find out!

Watching the newly designed player models move around the court has brought a new level of excitement to the Pro Basketball series, and I will talk more about that later. When you combine the player models and the depth of what Draft Day Sports offers, it can be overwhelming at times in the best way possible. For those unfamiliar, Draft Day Sports: Pro Basketball 2023 allows you to take control of the league, team, or coach and run your pro franchise as you see fit. You start in the preseason, setting your lineups, looking at trades, and training players in preparation for a grueling upcoming 82-game season and the playoffs if luck is on your side. The goal is to guide your team and franchise through every game, watch your young players improve, and ensure you give your veterans enough time off to keep them fresh and healthy.

Along the way, you will have to deal with the ebb and flow of the season, including morale, trades, injuries, and tweaking the rotation to ensure everyone is involved to some degree. You’re in charge of it all, and doing so while keeping one eye on this season and one eye on the future and the direction you want to see the franchise go. With Draft Day Sports: Pro Basketball 2023, I never struggled for something to do, and it never gave me a sense of wash, rinse, repeat. I had to slow everything down and ensure all the little details were falling into place and being taken care of. Seeing this all unfold on and off the court has now become equally exciting for me with the new visual display, and I found hours slipping by while lost in my Bulls franchise.

Regardless of your approach, Draft Day Sports: Pro Basketball 2023 offers more than enough to keep your interest level high.

The improvements here have created a next-level environment, and it’s drawing closer to a whole 3-D experience. I am speaking, of course, of moving away from a flat display of jerseys moving on-screen to a fully rendered 2-D model that emulates a pro basketball game using miniature players.

Why is this important? Now, watching the game unfold in such a unique way has helped capture the critical moments throughout a game. 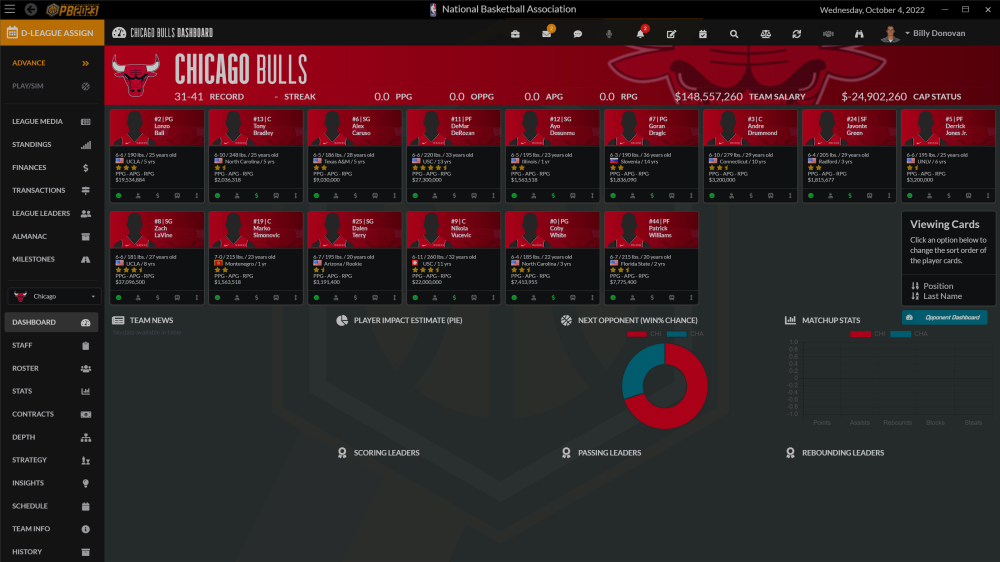 Not only is the gameplay redefined by the new player models, but Wolverine Studios has moved away from a flat court top-down view to a full press-box view that includes fans, press row, and a small part of the arena. That doesn’t mean there isn’t room for improvement regarding the 2-D rendering or player models, as I hope to see a small set of animations and player model differences like weight and height in the future.

That said, for me, the visual enhancements are by far the most significant improvement with Draft Day Sports: Pro Basketball 2023, and will introduce a much-needed breath of fresh air for even the most seasoned of veterans. 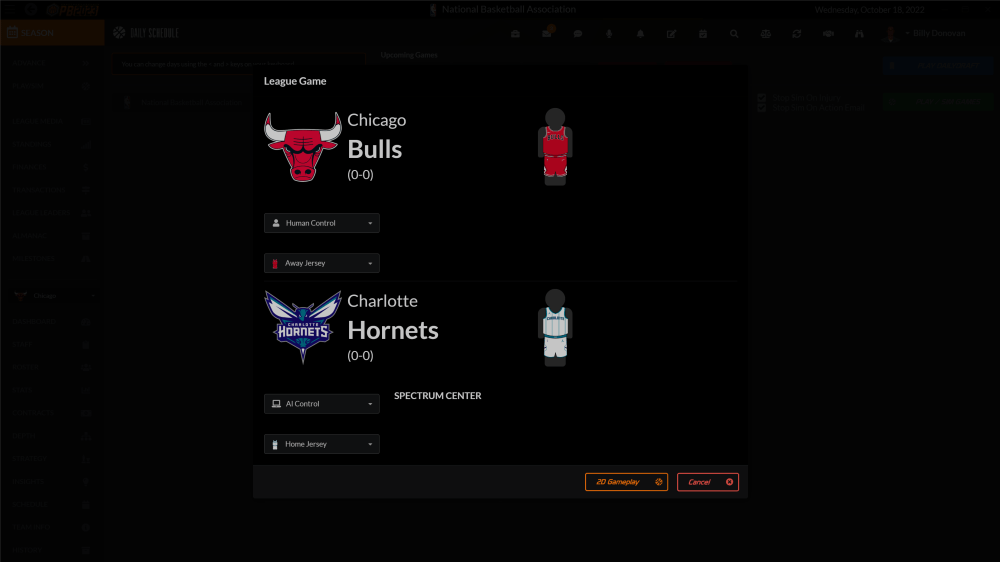 New flooring and new jersey models are here, and they have never looked as good before. Doing this has brought a new level of visual immersion to the title never seen before. As of this review, mods were available that brought the NBA to life with jerseys, coaching staff, player and coach photos, a 2022 real-life draft class, and both league and team-specific logos. While the courts included in the game represent their real-life counterparts, they aren’t licensed. A court template is available for you to create your own, but no current mod has recreated all 30 courts as of yet.

When I look at the depth for Draft Day Sports: Pro Basketball 2023, it’s impressive on a couple of fronts. On the surface, Draft Day Sports: Pro Basketball 2023 offers five game modes ranging from an offline sandbox style that lets you control everything in your basketball universe to an online league mode that lets others join up in your created league and play with and against you. 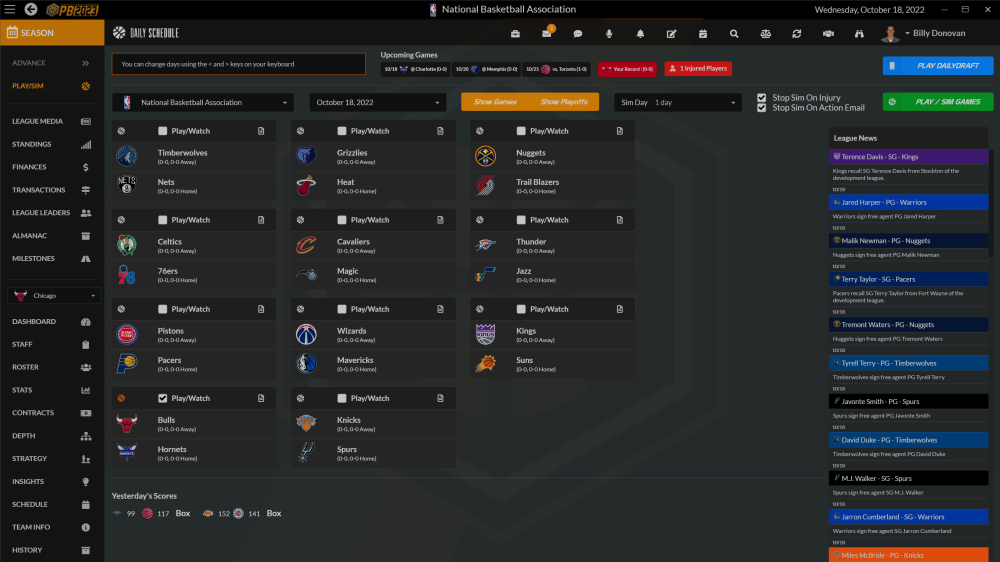 Within each mode, I have already talked about the available content and options, and the ability to dive deep into each area of the sport regarding rotations, stats, defensive and offensive adjustments, trades, and salary cap. The game also lets you step back and let “others” take care of the minutia, allowing you to focus on the games themselves and how you can impact each one.

Some days I want to control everything, while on others I just want to pace the sidelines and yell at referees, and the game allowed me to do just that.

I had been asking for visual upgrades for years, and the fine people at Wolverine Studios have stepped up and delivered. This is less what I don’t like and more what I hope to see in the future. The new game display features 2-D sprites that move in logical ways, which is a vast improvement over the previous display system. That said, in future iterations I hope to see an independent animation system where each sprite moves about on its own and is based on its player attributes and skill. In addition, a player creation system that allows you to copy and paste a player’s face on to the sprite would add another level of authenticity.

As I have said many times, I am a seasoned veteran of all the titles in the Wolverine library and can easily navigate the menu system. That said, I struggle quite a bit to capture the depth and options of each title because I need help to grasp what options do what. 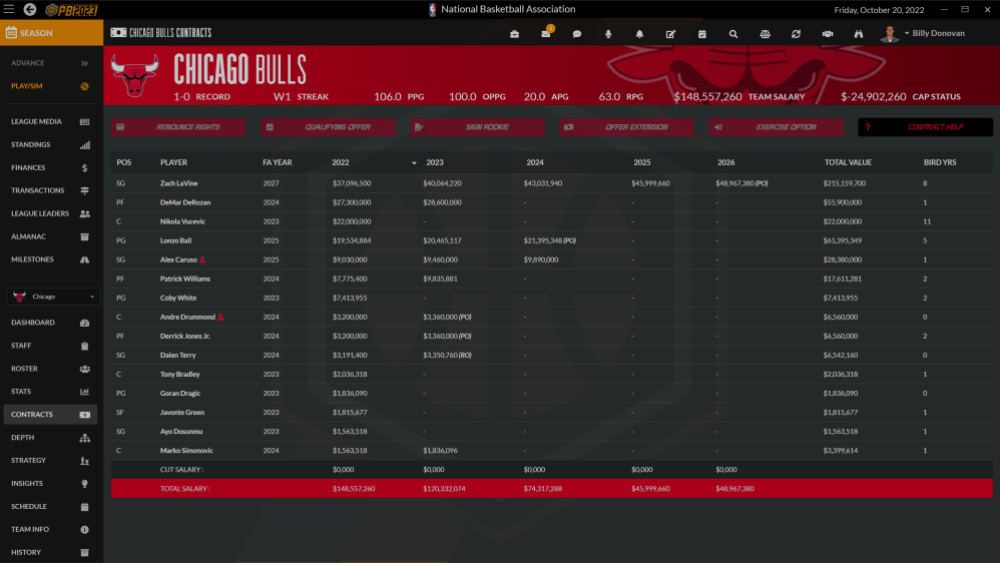 As I am always looking at ways to create a larger community and open the target audience up, I would love to see the developers create a simple menu system that is more “point and click” based and has a branching system to other options. I am not asking for a massive overhaul here, as the system works well once a semblance of familiarity sets in, but a retooling to allow newer players to enjoy all the game has from the start would be ideal.

The struggle with sports simulations that are released every year is determining whether the newest title is worth the upgrade. For me, Draft Day Sports: Pro Basketball 2023 is an instant upgrade. Even if you have purchased every version available, the visual upgrades would still be worth it.