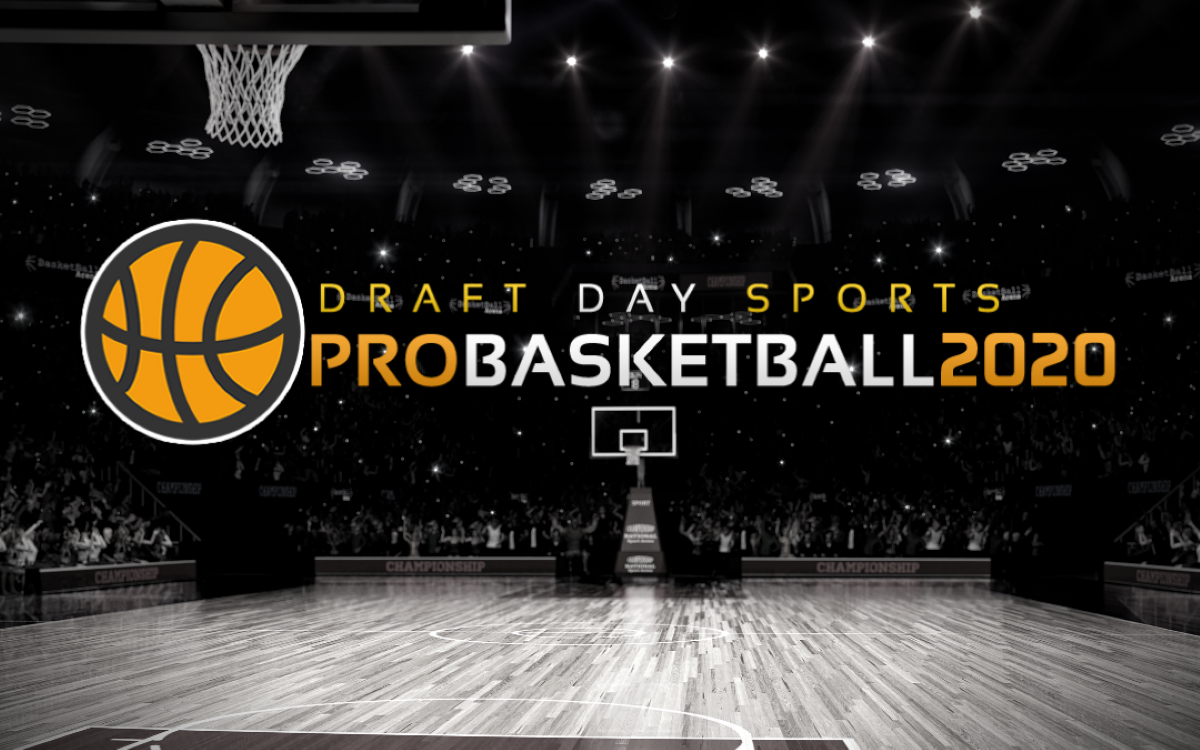 Wolverine Studios has become a stalwart in the sports sims arena, consistently churning out solid sports simulations in multiple sports genres. They are back again, this time with Draft Day Sports: Pro Basketball 2020. This time around the studio is giving people a chance to take their favorite fictional pro basketball team to the top of the simulation mountain.

So does the game find itself making a deep playoff run, or is it in contention for a lottery pick? Let’s find out.

While I refer to the game as a pro basketball simulation, with mods that are readily available the game turns into a true NBA sim. You have the ability to add full rosters, logos, jerseys, courts and more. What I love about this option is that it creates an immersive universe that is easy to feel connected to once surrounded by the familiarity of your favorite franchise. 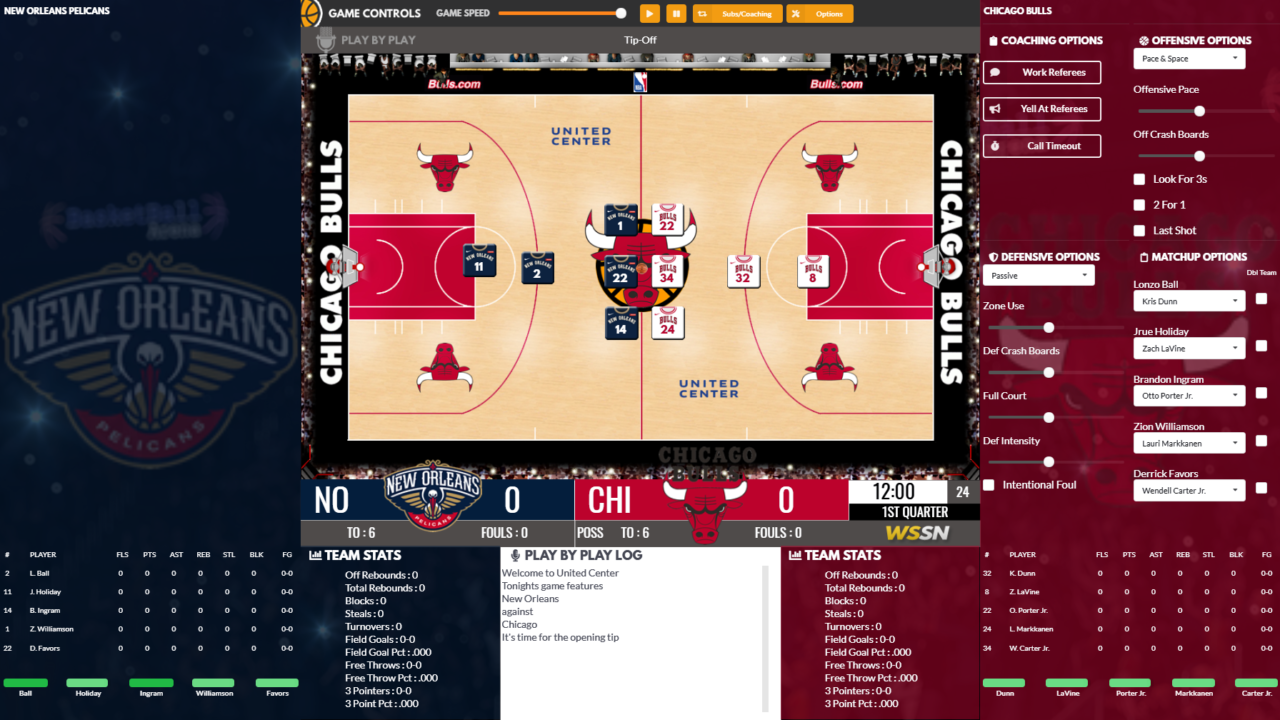 The ability to add and see my favorite player(s) perform through the season, accompanied by their actual jerseys, logos and courts was an easy decision to make. On top of that, having the ability to download or create real-life draft classes on a year-to-year basis was another welcomed feature that, again, adds to the overall realism factor and replayability.

I chose to create the current NBA season and run a franchise in that world, but for fans of other professional leagues outside of the US and Canada, the game can be modded to replicate any one of the major international basketball leagues also.

Of course, you are under no obligation to apply these mods, and you can simply run your fictional franchise with the teams that are provided within the current game — many do choose to play it this way. However, for me, the ability to play the current or any historical NBA season is where I found the most excitement and enjoyment overall.

DDS: Pro Basketball 2020 goes well beyond the court when creating a world for you to play in as a coach and/or general manager. The court is where you see all your hard work as a cohesive unit come to fruition (hopefully), but the real work in DDS: PB 2020 is done in the inner-offices of the arena. 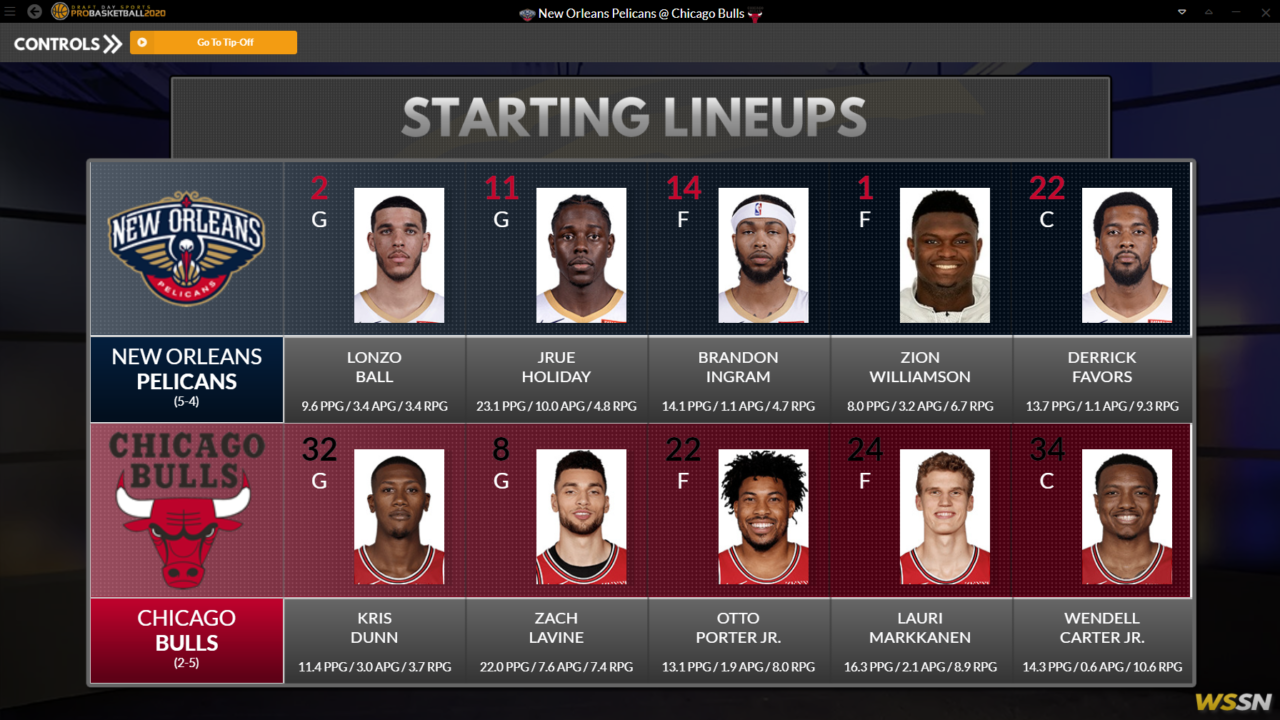 As GM/coach you will find your daily, weekly and monthly itinerary filled with one-on-one conversations with the players, devoting time into the upcoming draft and looking for possible trade scenarios. You will do all this while trying to ensure that the yearly goals discussed between you and the owner are being met.

The depth of this title is what had me coming back to play it over and over again. I was constantly pouring over scouting reports, spending hours looking at trade scenarios, maintaining player relations, and of course, being in-house to coach each and every game of the season. It may sound overwhelming, but the game does an excellent job of walking you through each scenario and explaining all the functions that go along with your title(s).

One of the more difficult aspects of sports simulation is to accurately provide a realistic presentation of the sport the game is portraying. Much of a professional sports league’s presentation is bound to licenses, stadiums/arenas and booth commentary. While the mods I spoke of previously can help eliminate the licensing issue with courts and logos, DDS: Pro Basketball has no ability to show team stadiums, entrances, booth commentary or team/stadium-specific celebrations. 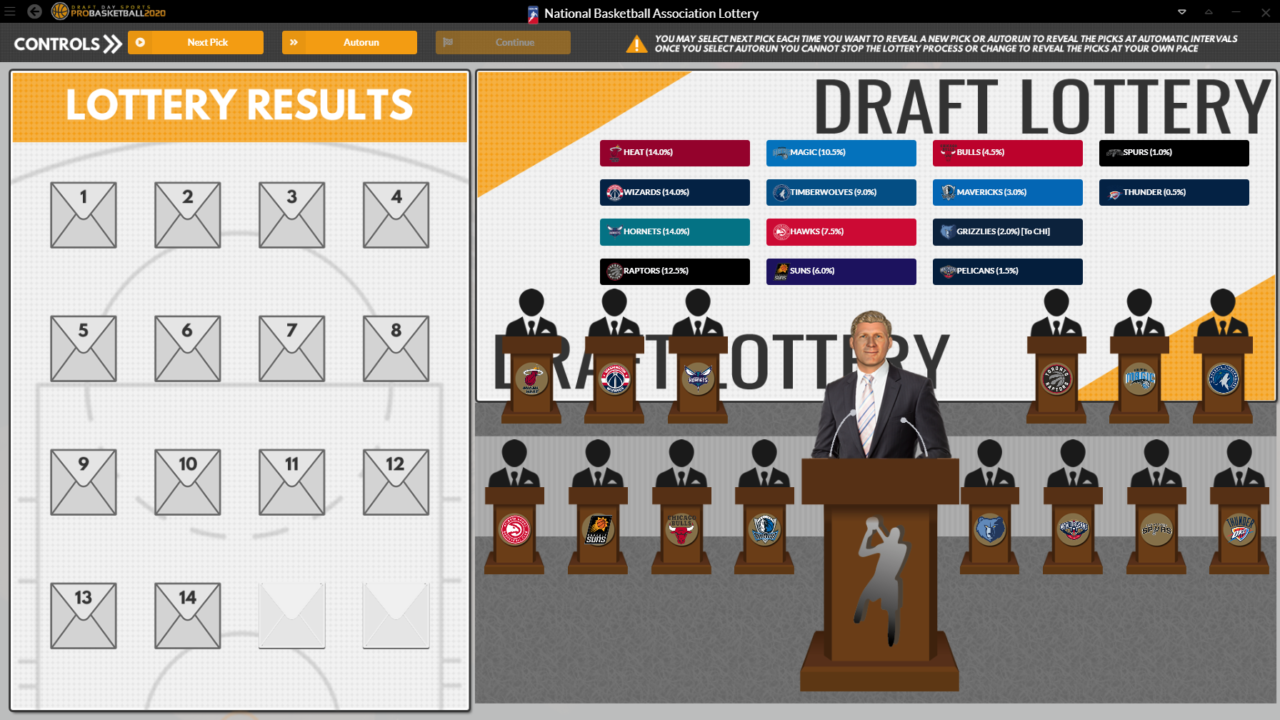 To make up for the lack of presentation in those areas, the game provides a realistic take on the draft lottery night, and the actual draft itself. Users will get to fully participate in the draft lottery and draft day, and feel like they are part of the action.

I was able to secure an extra first-round draft pick through a series of trades from the previous year, and found myself waiting for the next envelope to drop during the draft lottery to see where my team would end up with both of my first-round picks for the upcoming draft. 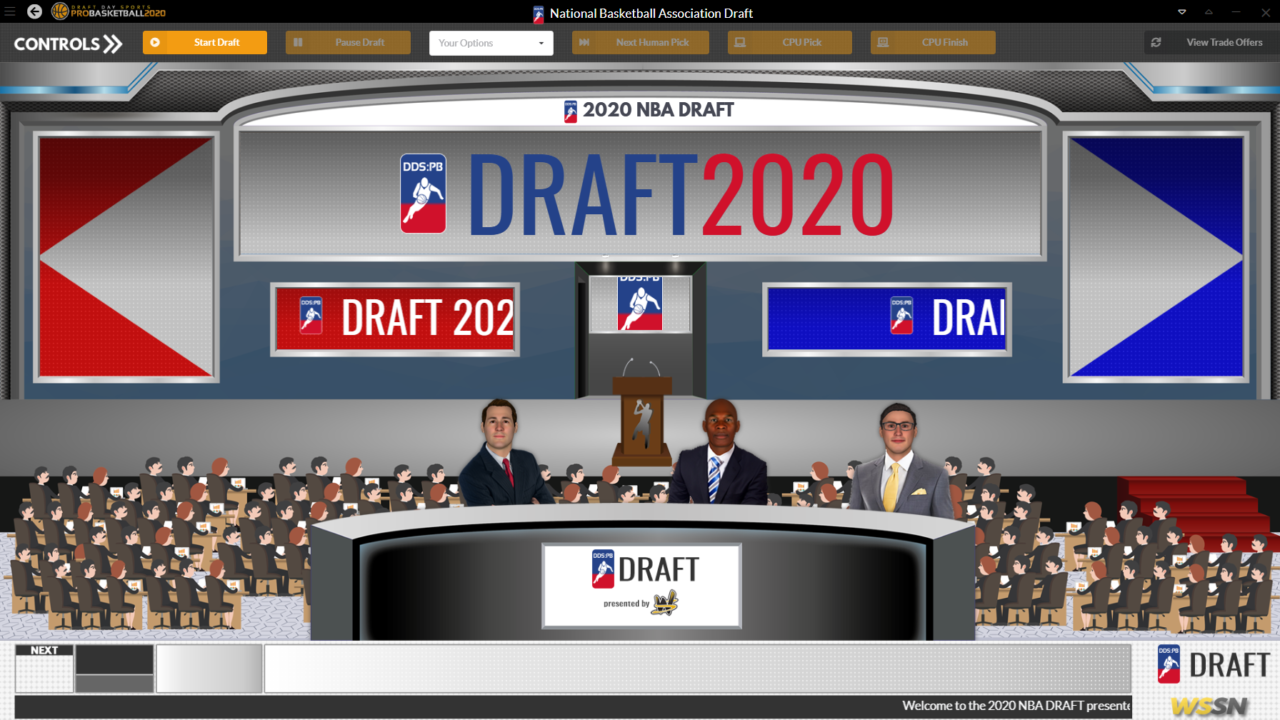 Overall, the game does an admirable job of providing realistic presentation whenever it has the chance. While it will never come close to an NBA 2K or MLB The Show presentation style, what the developers create with what is available makes the presentation of DDS: Pro Basketball something that I liked and appreciated a lot.

I’ll keep this short, but in my experience with DDS: Pro Basketball 2020 I occasionally ran into a few glitches such as the game freezing, crashing to desktop, and different team logos being displayed during the game simulation period. Did it happen all the time? No, but enough times for me to take notice. I understand the game was just released, and issues need to be patched, but it is still worth noting in the review.

As I chose the role of GM and coach, there are yearly goals that must be obtained in order to keep the owner happy and create job security for myself. In my sim world, I took over a Bulls organization that has had very little success since a certain duo vacated the United Center many years ago.

As a first-year coach and GM, I would expect a few years to clean up the mess that was left behind for me. Instead, I had the owner basically threatening me with my job if I didn’t turn this around in the second year. By the way, we missed the playoffs by one game, and I trimmed the roster of some very bad contracts and got the team under the salary cap. 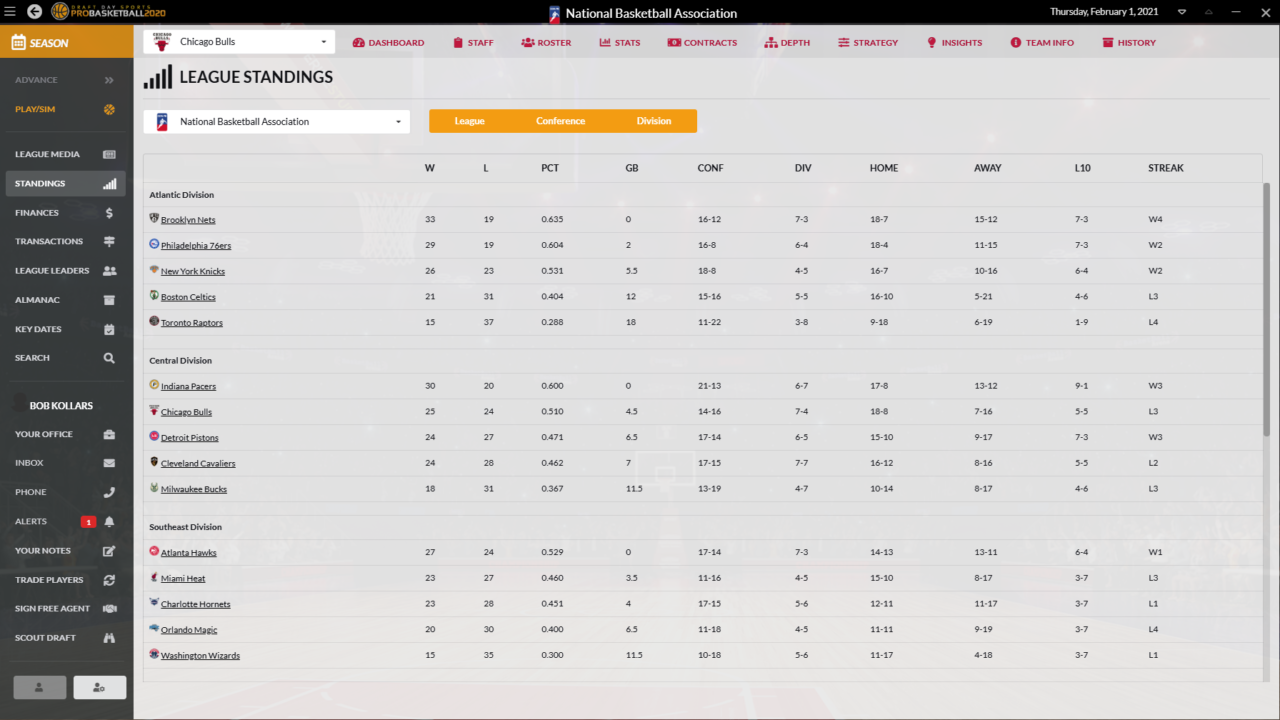 In the second year, I took the Bulls to the playoffs as a three seed, stayed away from high-priced free agents, and was able to secure two lottery picks from the previous year, which returned two very good players on the cheap. Once again, I found the conversation with the owner to be volatile in nature. In other words, he threatened me again.

There needs to some middle ground here as the relationship between the owner and GM goes. If I saved the organization money, made the playoffs as a three seed, had the United Center at capacity or close to it every home game, and a roster full of generally happy players, then how about a “we came close this year, now let’s win the whole damn thing next year” type of speech. Instead, I received an “if you go over the salary cap next year there is going to be big trouble” verbal beatdown.

Thankfully, the interaction between you and the owner is minimal throughout the year and it doesn’t detract greatly from the overall experience. Still, there needs to be a greater variance of possible outcomes and relationships inside the owner’s office walls.

Draft Day Sports: Pro Basketball 2020, while not perfect, offers up the chance to live the grind of a pro basketball executive (and coach) on a day-to-day basis. The game provides you with the chance to see the action on the court in a full, real-time 2-D experience, and also allows you to make decisions and choices that help construct a team behind the scenes.

The consistent flow of the title creates an engaging and fun world that had me wanting to come back often to play again and again. Even if sports text sims aren’t generally your thing, DDS: Pro Basketball 2020 offers up enough depth, fun, immersion and realism to cater to even the most outlying fan.