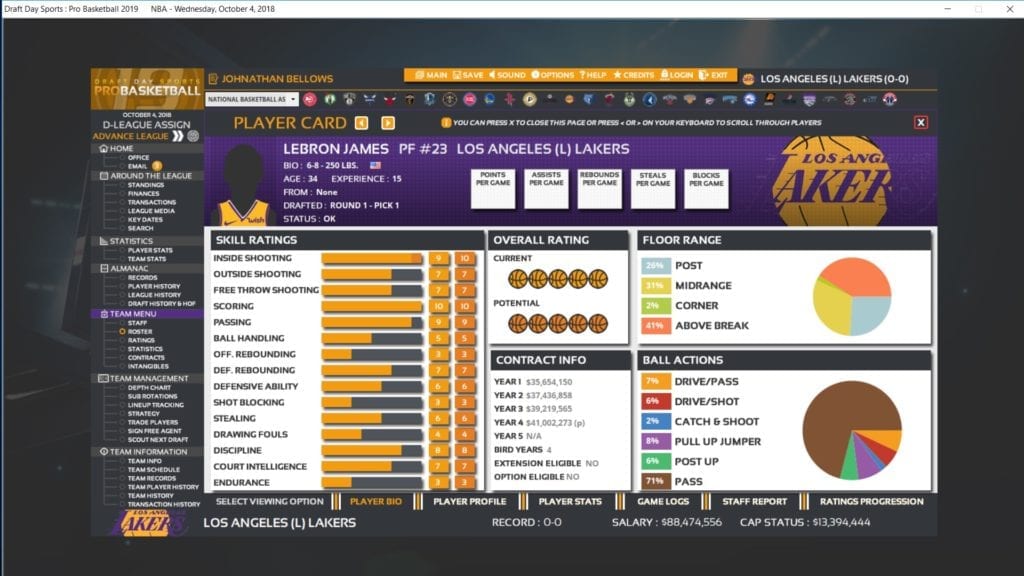 If anyone were to ask me what my favorite sport is, without even hesitation my answer would be the game of basketball. Football may be the most popular, baseball is America’s pastime, hockey is action packed, but to me, nothing compares to the simple yet complicated structure of basketball. As a guy who loves text sims, Wolverine Studios’ Draft Day Sports: Pro Basketball 2019 is something that was made for me. So Is it worth the price tag for people who are text-sim hoop junkies? Well, that’s hopefully what I’m going to help you decide. 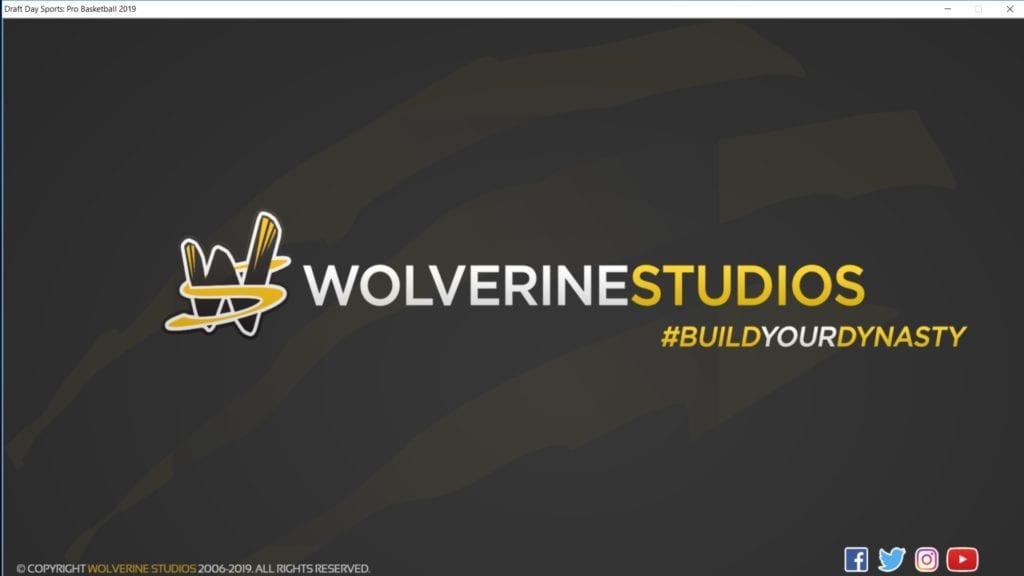 At its core, this game is a statistician’s dream. It has every stat you could possibly imagine for any given player. What are their tendencies when they have the ball? Do they shoot most of the time? Pass? Take another player off the dribble? Do they like to set up in the corner or the top of the key? When running the floor, do they stop above the break or crash to the paint? This is all reflected in the sim engine when you’re playing or simming games, and it gives players a certain lifelike feel to them. Couple that along with the player personality system, and you have a world brimming with grown men who have true to life feelings. Being the head coach of your team while trying to find the right mix and match of players who fit your specific style of play is both maddening and incredibly rewarding.

Being able to track how well certain lineups play with one another is another spectacular feature of team building. In one of my playthroughs, I noticed that LeBron James played MUCH better with Rajon Rondo on the floor with him as opposed to Lonzo Ball. However, when looking at the on/off percentages, the team had an abysmal -3.8 net rating with Rondo on the floor, and they improved to a +4.2 with him off the floor. On the other side of the spectrum, the team was actually a +7.2 with Lonzo Ball playing. So despite my superstar playing with the old vet, I wanted to leave Lonzo in the starting lineup due to him making the entire team better with him on the floor. It’s things like that that kept me engrossed and playing for hours.

Playing in local mode might be even more fun. Being just the general manager and watching the head coach make boneheaded lineup decisions will leave you fuming and ready to move on to a new coach. I saw the opportunity to make Phil Jackson my head coach after firing Luke Walton a quarter of the way through the season. I said great, LeBron will get coached by one of the greats, the championship is in the bag. Oh boy, was I ever disappointed when I found out Phil preferred veterans over young players by a wide margin. I watched as Kyle Kuzma got fewer minutes per game, to the point where he would complain to the media after almost every game. It got so bad he eventually requested a trade out of town after his relationship with the coach and the team deteriorated to almost nothing.

The level of strategy never ends. Before each game, you can assign your defensive matchups, you can even assign your top three defensive players to certain matchups. Having a real defensive anchor in the middle or on the wing goes a long way to being a solid defensive team. I watched as I made a few trades for some stalwart defensive players, and with each passing week my team’s defensive stats improved mightily. This is all something I’ve never been able to experience in any console basketball game. Oftentimes, I just got lost in all its depth.

The draft is very well done, albeit somewhat repetitive. Being able to enable players entering the draft after high school is a nifty feature. Seeing how good that 18-year-old stud is after he dominated the high school landscape, coveting him for the top pick, drafting him and then realizing he’s not quite NBA ready yet is both fascinating and disappointing. However, when that high school stud turns out to be the next great one, you can really appreciate the tuning that went into the generated rookies.

Free agency is handled extremely well, with the cap rising every year reflecting the new CBA rules and everything else you could ask for. I didn’t see any crazy or out of whack signings through my time playing. The “play for winner” personality trait is one of the best things you could ask for in a basketball game. Aging vets won’t just sign anywhere, they’ll want to play for a team that gives them a shot at a ring. Superstars who want to win and only win will do the same. Then you have the greedy players who will go wherever the dollar signs shine the brightest. Once again, these players have feelings, emotions, and decision making abilities. It’s absolutely amazing to watch the offseason unfold.

Historical play is another key feature in this year’s edition and it’s greatly improved on from last year. Starting from the beginning of basketball, you can watch the league unfold and take shape, an alternate history that kept me interested for hours. Do the Celtics and Lakers become the two greatest dynasties ever known? Does Jordan still fall into the Bulls’ laps and change the course of history forever? Who becomes the all-time leading scorer? Who’s the real greatest of all time? With random potential, not living up to the hype and a multitude of other factors, reshaping the course of NBA history may have been my favorite time with the game overall. Watching Grant Hill lead the Phoenix Suns to back to back to back NBA titles was quite a joy to see. Seeing a guy like Tim Duncan never reach his full potential due to a lack of playing time/opportunity was heart breaking yet mesmerizing.

There are many examples of things like this as your game world unfolds before your eyes. All of your champions, league leaders, award winners, stats, etc. are all tracked as the game progresses so you can go back and view everything that’s happened from the beginning.

While there are a ton of things in this game that I love, there are a few things that I don’t like. First, let’s get the major one out of the way. I’ve had to be mindful of constantly saving my game progress because of the crashes. Whether it be a crash that forces the game to close, or a crash that makes me shut down my entire computer because I can’t escape the error message. The game is fairly new so I’m confident these will be handled by the fine folks at Wolverine Studios.

Other than those pesky little bugs, the UI could use a bit of a cleanup. At times it seems like everything is smashed together to fit multiple buttons on one screen. More variety in the league media menu would also go a long way. I love seeing the power rankings, injury reports and transactions, but we need a newspaper or magazine-style League News section. To be fair, there’s a nifty little “Breaking News” bar that flashes red on the bottom of your screen when a trade or major injury happens, but being able to go and read a news story about said trade, injury, or 50-point game performance would put this game over the top. The players already have life to them, now it’s time to bring the entire NBA world to life.

If you’re a fan of the NBA, or just basketball in general, do yourself a favor and get this game. I can’t say it loudly enough. Despite the bugs that I know will be worked out, this is an incredibly deep and fun game that any fan of the sport will love — especially those of us who love the statistical and strategy aspect. Now, time for me to go back to desperately trying to manage the ego of my high maintenance rookie superstar while keeping my vets happy on the outside looking in of the playoff race. Could a coaching change be coming soon? Who knows, let’s see if I can get my players under control.