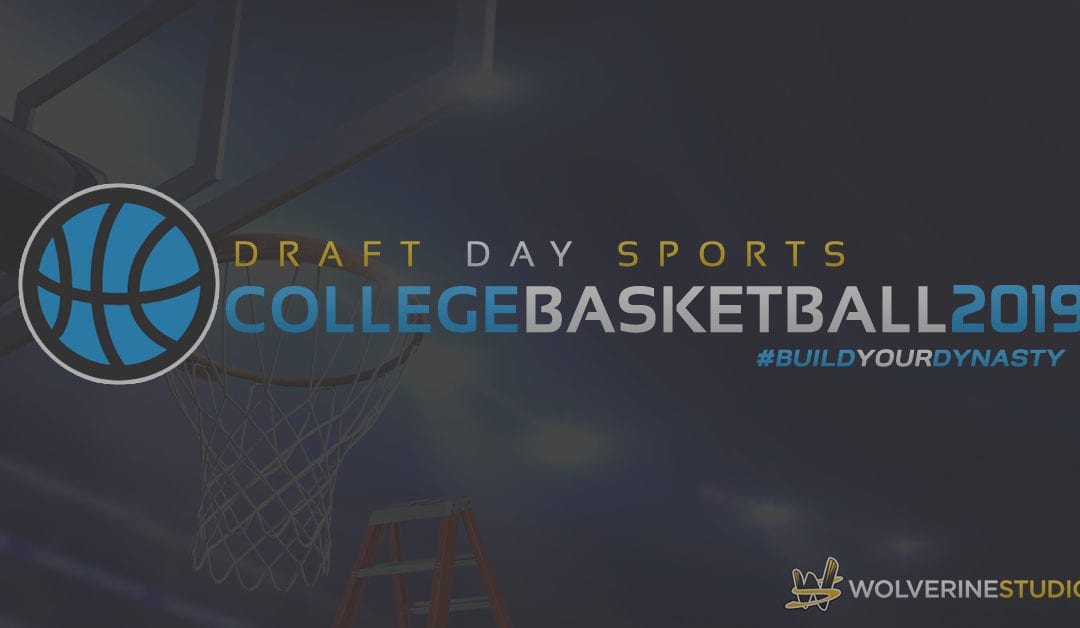 While the sports gaming world suffers from the lack of NCAA collegiate titles at the moment, Wolverine Studios is doing their best to fill that void. They are doing so by providing text-sim franchises such as Draft Day Sports College Football and Basketball. While they may not be the traditional college titles that the majority are used to playing, they can help ease the pain many feel without college sports video games in their lives. Given the fact the March Madness is underway, we wanted to take an in-depth look at Draft Day Sports: College Basketball 2019, and what it may offer those in need of their collegiate fix.

Many people may feel overwhelmed at first with the number of options and depth that the game provides. From in-game coach controls to securing that coveted blue-chip prospect, DDS: CBB 19 throws an awful lot at the user.

The sheer amount of information can be daunting, but once you start to understand the flow of title and what is being offered, it truly feels like you are in control of the team. Want to know how involved the parents are in the recruiting process? That information is there. Need an in-depth breakdown of your next opponent? The weekly scouting report will do just that. 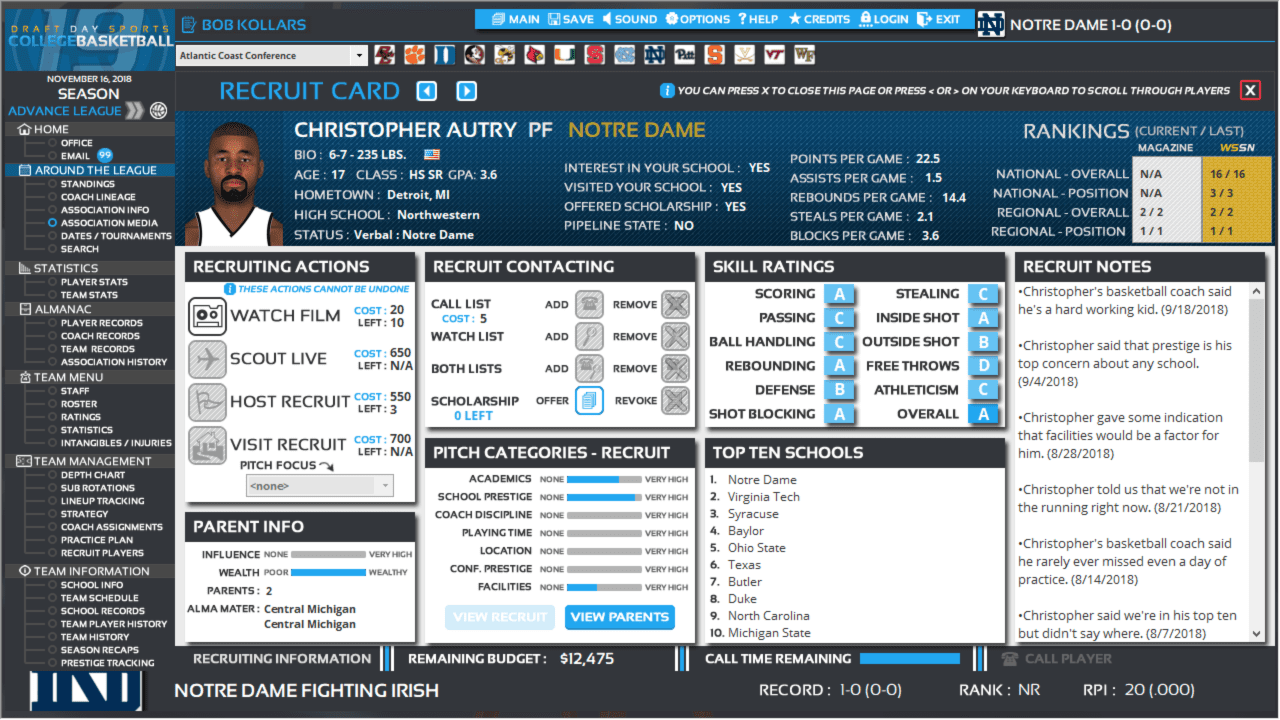 What is amazing about almost all the information the game allows you to have access to is that it can play such a huge part in how successful you are while trying to accomplish the task at hand. I found myself referring often to the weekly scouting report as I set up my pregame plan for my opponent — and would change it on the fly if things were not going according to plan. Everything you need to know to feel prepared for the season, the week and the current opponent is available at the click of a button — and it’s all pertinent.

You might ask how you enjoy the gameplay of a text-sim based sports title? While a valid question, I am referring to watching your team’s game play out in front of you. DDS: CBB 19 gives you the option to watch all the action unfold in a 2-D overhead view, which if modded correctly, will provide accurate looking courts for your team, your opponent’s team or a neutral-site tournament location you may be playing at. 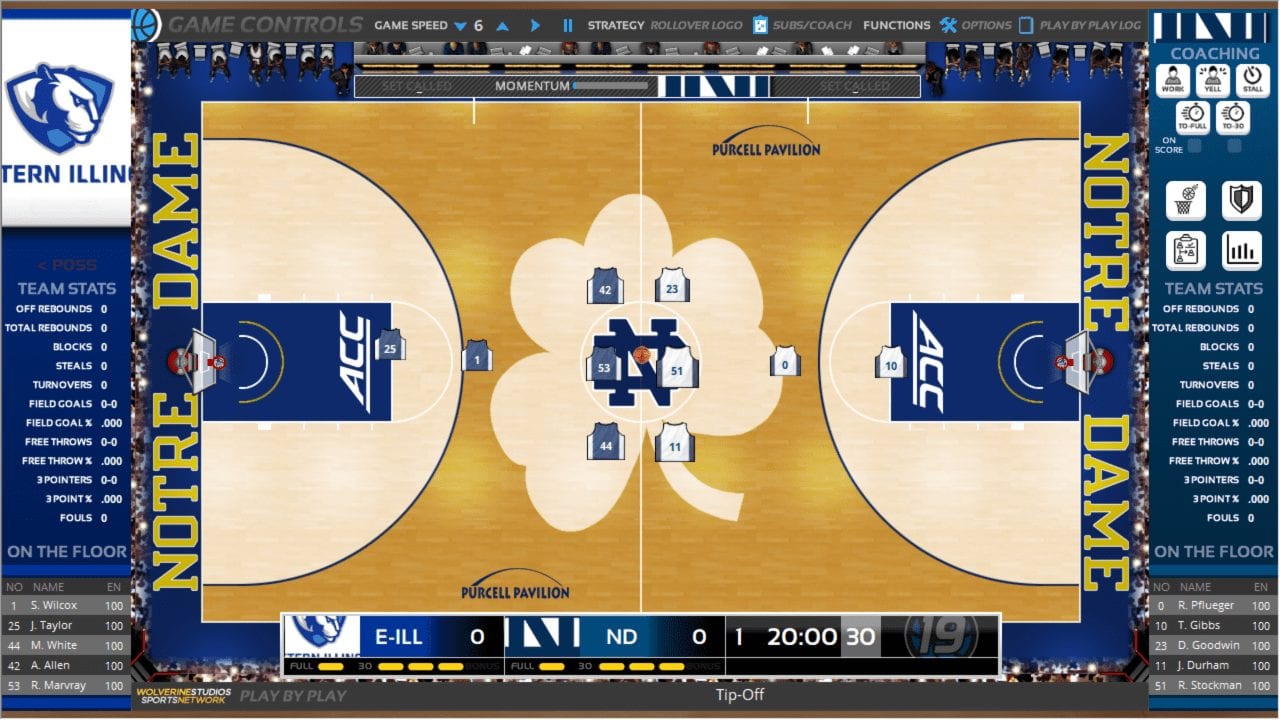 The title also offers a “gamecast” view, which is more of the traditional view of text-sim sports titles. I prefer the 2-D version though, as you can see the on-court action take place, and it gives more of an immersive feeling (but to each their own). On top of seeing the action take place in a 2-D environment, the game also has court and crowd sounds to go along with the action — all while allowing you to adjust the speed of the action on the fly.

Speaking of adjusting on the fly, if the team or an individual is not performing at an expected level, the game now allows you to personally motivate the whole squad or that of an individual who may be lacking in focus. You can scream or praise in hopes of getting every ounce of effort out of the situation, and depending on your choice, the game gives real-time feedback in regards to your efforts.

When you combine everything the title offers while being in game, the whole package is much more immersive than I thought a sim-based title like this ever could be. It is a testament to the amount of thought and effort that was given to DDS: CBB 19.

While options and depth might sound similar, they most definitely are not when it comes to this title, as the game allows you to establish your own universe and run it in the way you want. Some will love the idea of traveling during the summer and watching possible prospects play in summer events and leagues, while others will want to pass that task off to their assistant coach (in other words, let the computer control that aspect). Some will also love the idea of recruiting players, traveling to their homes, talking with them on the phone, and having them on campus for a visit, while others will want to entrust that job to their staff. 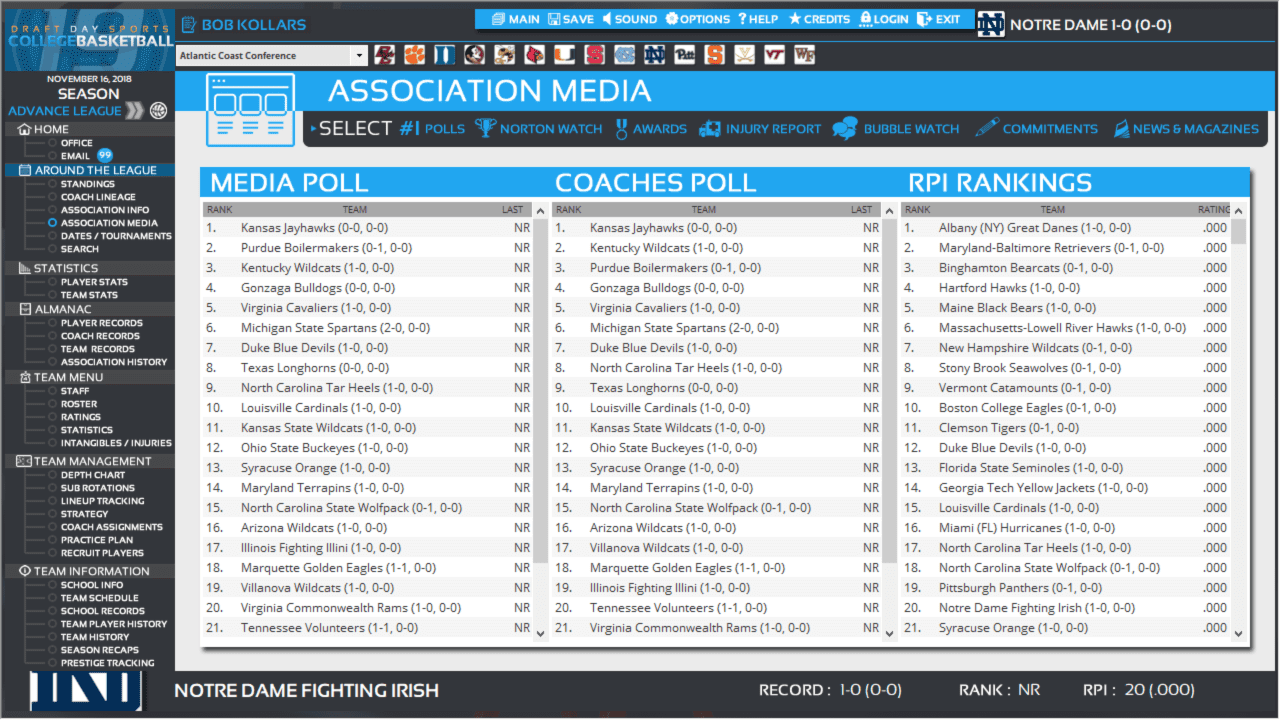 There is no right or wrong way to approach and play DDS: CBB 19, but all the options are there for you to play specifically how you want, and all of these options can be changed over time as you begin to feel more comfortable with the title. Wolverine Studios has made the game accessible to all, and that is the approach a company absolutely needs to take with a text-sim game like this. 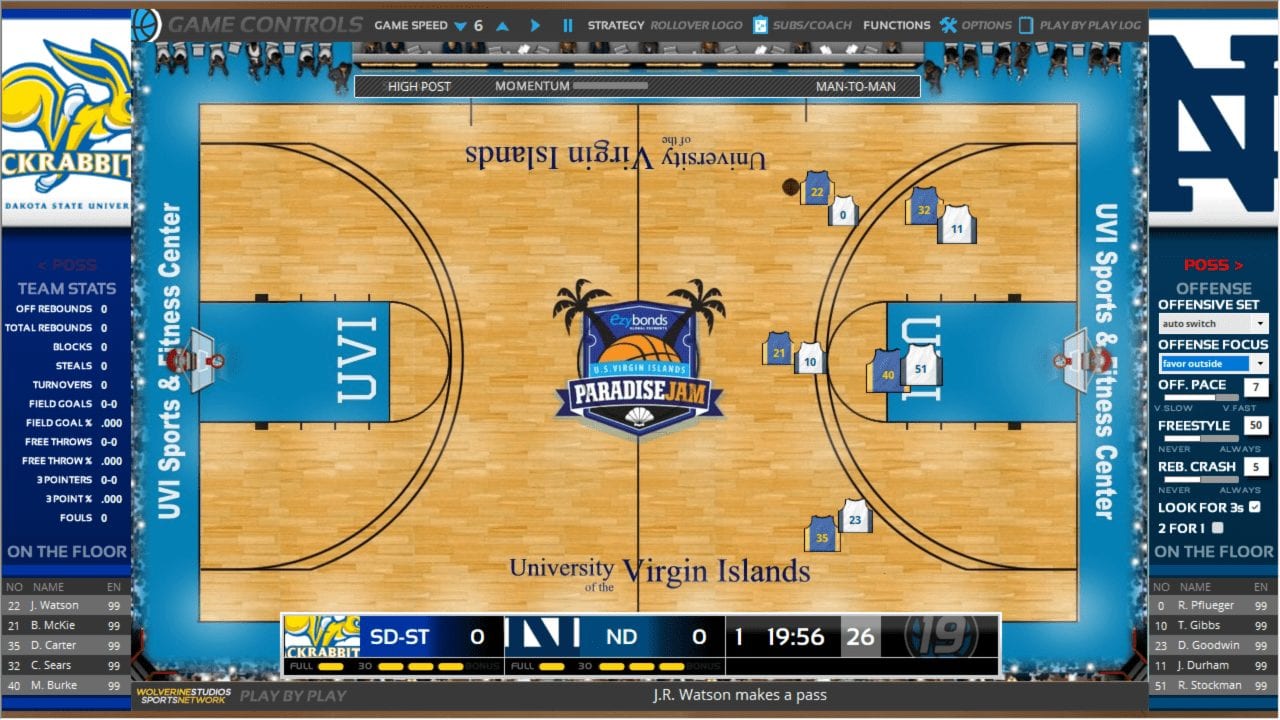 I am not saying you have to utilize one of the many game mods out there to enjoy DDS: CBB 19, but it definitely helps. Obviously with the current climate of NCAA athletics and sports video games, DDS: CBB 19 is not a licensed product, but the title does allow for teams, rosters, conferences and tournament names, and all the logos associated with these to be fully modified in whatever universe the user is trying to replicate. Most of the game mods can be found right on Wolverine’s own website, with easy instructions on how to apply them. And, of course, they are free of charge. 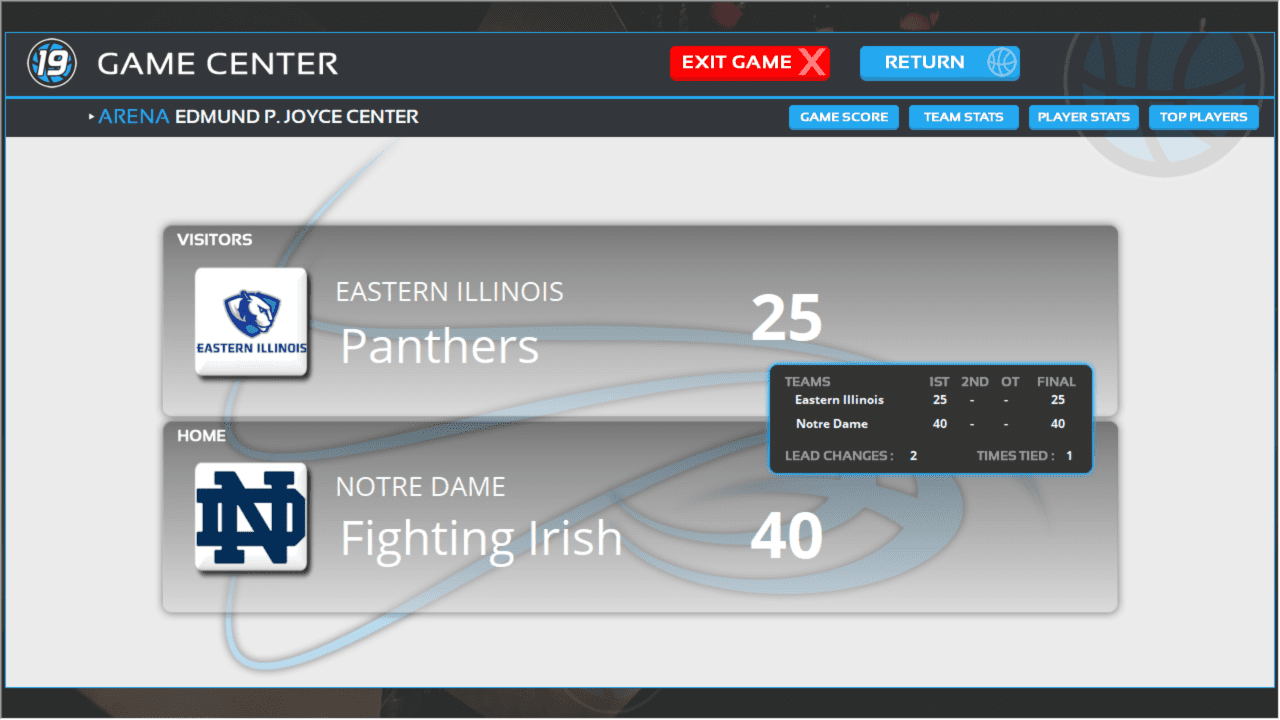 It may seem odd that I mention the game view as being one of the negatives after giving it praise earlier, but I am doing just that for a specific reason. The 2-D view, while helping with immersion, only goes so far because of the icon/avatars that are used during the game itself. Instead of seeing little sprites representing the action unfolding on the court, you have to watch individual jerseys move about the court.

While not a huge issue, if Wolverine were to implement a view similar to that of Out of The Park Baseball, it would enhance the overall experience in an extremely positive way. 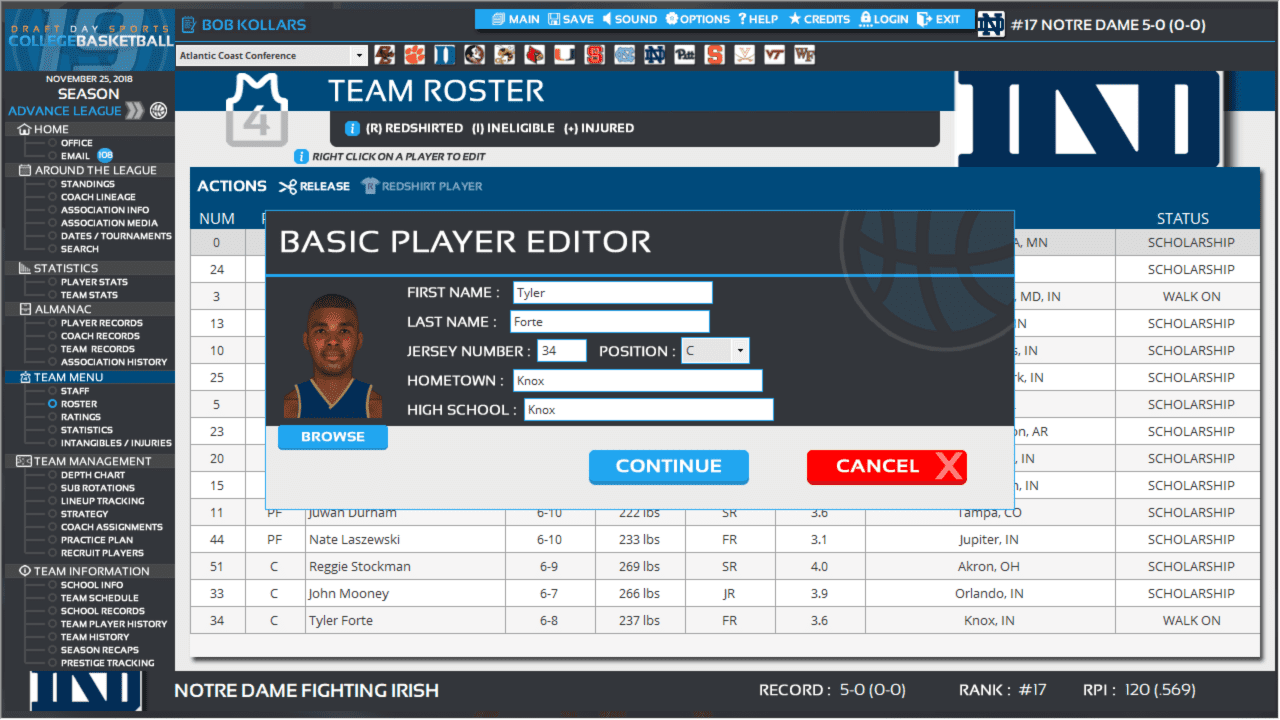 The game allows for roster editing, but the in-game version is limited and a bit cumbersome, especially for newcomers. The rosters can be exported and edited, but not everyone has the ability to do that. A simple retooling of the in-game roster editor would make things a bit more approachable for everyone, and allow people to easily manipulate the world they are trying to create. Utilizing the commissioner option can help the editing process, and as mentioned before, almost everything can be edited, I am just hopeful the process can be a bit more streamlined in future editions.

I have rarely, if ever, enjoyed text-based sports simulators at a high level, but what Wolverine has accomplished and delivered with DDS: CBB 19 has changed that. The depth, control and functionality here makes it accessible to the masses and helps draw in new members to an already growing community. Even if you’re not into text-sim-style games, if you enjoy college basketball then DDS: CBB 19 should provide you with hours of simulated college basketball entertainment.