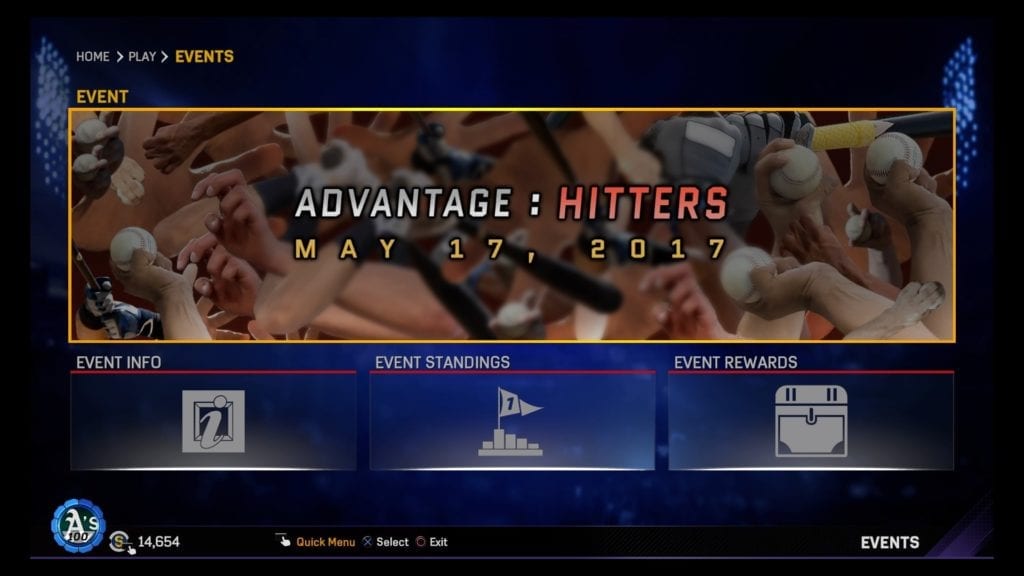 Another busy afternoon for Diamond Dynasty mode includes the Ranked Seasons rewards rolling out, a new Event being advertised before beginning tomorrow, and the Set 4 packs being released along with a pack that’s tailored to the Event that will be taking place.

The Ranked Seasons rewards affect everyone who played that mode, so it’s worth mentioning the release of these rewards began at 3 p.m. EST, and will be continuing for at least a couple hours. This includes the Breakout Paul Goldschmidt for those who made it to World Series rank, and the Francisco Liriano for those who at least made it to the Pennant Race tier — as well as various other rewards depending on the highest tier you made it to during the first Ranked Seasons. The next season of Ranked Seasons will begin once the rewards have been finished being given out (presumably later today).

The new event is called Advantage: Hitters, and it will run from May 17-24. It is titled as such because it will be right-handed-only batting lineups going up against left-handed-only pitching rotations. The new pack tailored to this event is also up in the Store, and it will run you 4,000 Stubs per pack. The pack includes a guaranteed Legend or Flashback, and any of those throwbacks pulled from the pack will be eligible for the event. The exclusive players for this pack are the Hardware Legend Robin Yount (93 overall), and the Hardware Legend Steve Garvey (88). This 3-inning event will be played on All-Star difficulty, and your team can be as high as 90 overall. The top rewards are a Breakout Joe Carter (89) that you get for 50 cumulative wins, and a All-Star Flashback Andrew Miller (93) that you get for 12-win streak.

The other new pack is the Set 4 pack, which includes exclusive Breakout Legend Cal Ripkin (94), and Breakout Flashback Mat Latos (91).