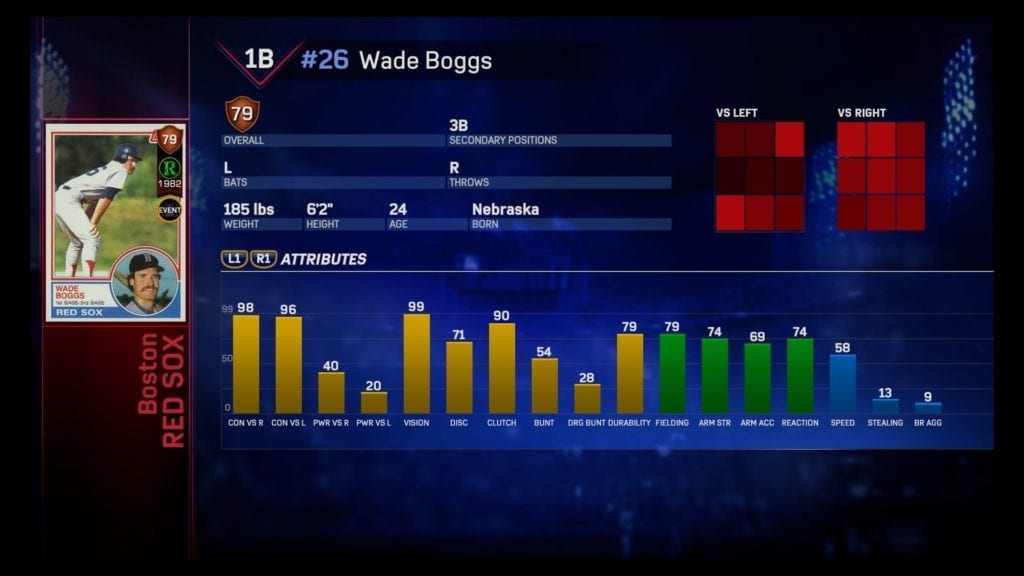 The new Player Epic mission revolves around Rookie Wade Boggs (79 overall), and he has a better chance of being found in the limited edition Ballin Is A Habit pack (15K Stubs). The Ballin pack also has a greater chance at Diamonds and Golds, but there is no percentage listed in terms of how it correlates to regular packs. I personally opened one pack and got a Joey Votto and Dallas Keuchel, but obviously that should not sway you one way or the other. The other pack released is the usual Bases Loaded pack. This one is limited to three per person and costs 5,000 Stubs per pack. You will get a guaranteed Camo equipment item in the pack, and you need all six to complete the Hardware Legend Yogi Berra (96) Collect mission. It appears two of the six items are much rarer than the others, as four equipment items are going for around 1,000 Stubs while the other two are going for over 25,000 Stubs on the Marketplace at this juncture.

The Ticket Store has three new Veteran cards in it today, most likely as the beginning of a preparation for the next Program, which will presumably be a Veteran program. They are a Veteran Flashback Victor Martinez (94 overall, Gold Level 1, 2,650 Tickets), Veteran Legend Tom Seaver (84 overall, Bronze Level 50, 600 Tickets), and a Brad Ziegler (82 overall, Bronze Level 30, 440 Tickets).

The roster update this week was more a slow burn than a big shake-up. It sets the table for a more explosive roster update in the future with more players changing tiers, but for now it mostly moved players around within existing tiers.

Diamonds: No new Diamonds this week, but Lindor and Goldschmidt went up.

Diamonds: Nobody lost Diamond status, but Miguel Cabrera went down.

Gold: Trea Turner maintained Gold status but did go down a bit.