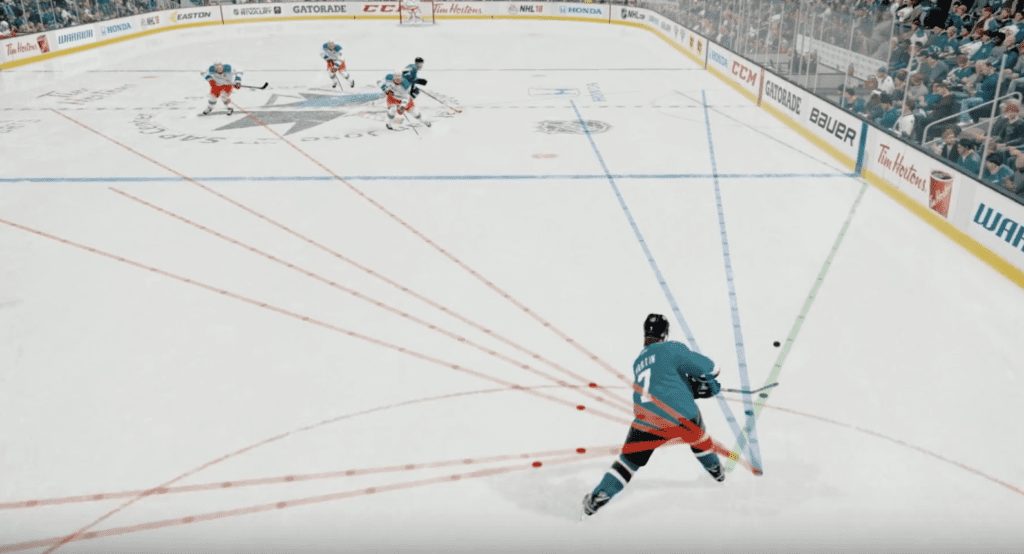 With the NHL 18 beta scheduled to arrive tomorrow (emails coming tomorrow), EA has posted some more details on the Creative AI, featured in the game this year. Creative AI will leverage all of the same creative tools as you do for beautiful, intelligent decision-making all over the ice, including board passes and through-passing into space.

We have improved a teammate’s ability to find you on a breakout through redoing our A.I. passing analysis and player positioning and paths on breakouts. They now have the ability to use bank passes and different pass strengths to find you – whether it is an off-the-boards bank pass or a soft through pass for you to skate onto.

Additionally, the A.I. will now look at more passing options than ever before and will be in better position to make a pass or receive one. On top of attributes like Offensive Awareness and Passing, the A.I. will also factor in a player’s handedness, speed, offensive pressure and the risk versus reward of a player when making a pass. The A.I. will also take more risks if the potential offensive return of a pass is greater than the risk.

With the A.I. passing being redone, we also looked at and improved upon all of their offensive analysis, including determining when it is best for them to skate, shoot, pass or even use a Creative Attack deke. The Creative A.I. in NHL® 18 will leverage all the tools you have available to you. From the all-new Defensive Skill Stick to Creative Attack Dekes, the A.I. will showcase their skill more.

On the defensive side of the puck, the Creative A.I. will leverage the all-new Defensive Skill Stick to help shutdown the opposition. From blocking off passing lanes to being in better position to intercept a pass, the A.I. will showcase their defensive skill. With a smaller ice surface in NHL® THREES, we had to readjust and rework the A.I. to make sure they reacted to the smaller playing environment intuitively. This allowed us to improve our A.I. across all modes so they are able to read and react to plays better.

One of the major areas where THREES helped improve the A.I. was on rushes. The majority of rushes that happen in a regular NHL game also happen in THREES. Whether it’s a 3 on 2 or a 1 on 1 rush, the A.I. across all game modes will read and react better to rushes.

Offensively, the A.I. is more dynamic in how it picks the players to take part in a rush. Attacking A.I. defenders will evaluate whether or not they should jump into the rush to create a scoring chance or to sit back at let their forwards take control. Additionally, neutral zone and offensive zone entries were improved upon and the A.I. will take offensive pressure, game situations and your strategies into account more effectively now. Finally, both side and middle offensive zone entries were worked on and the A.I. will factor in the handedness of players to help recognize where they should position for a pass or a shot.

Defensively, the A.I. has been reworked to track players on the rush better. Also, the A.I. defense’s ability to transition from rush defense to set up defense has also been improved. Defensive skaters who are trailing the play will hang out and cover the point based off of pressures and A.I. strategies. For example, A.I. on Tight Point will set up higher on a rush after reentering the defensive zone to cover the points. Finally, the defensive A.I. has better man-to-man defense, will provide better strong-side pressure and will also set up in the neutral zone to force more lateral puck movement.

With there being more rushes in THREES, we were able to spend more time learning and reworking the A.I. on both sides of the puck. Additionally, THREES helped us improve player avoidance in all situations and 5 versus 5 play for in-zone set ups both offensively and defensively. The A.I. will set up for one-timers or other opportunities in the zone based off what is happening in the zone. Whether it’s driving to the post to create a back door pass option or hanging in the high slot to unleash a one-timer, the A.I. is able to read and react to the play better in all zones.

It is a fine line in providing the A.I. the proper tools to read and react to the play to be better teammates while also not allowing them to dominate the play. Overall, the Creative A.I. in NHL® 18 will provide more options on offense and defense and are better suited to read and react to plays in all situations and modes.