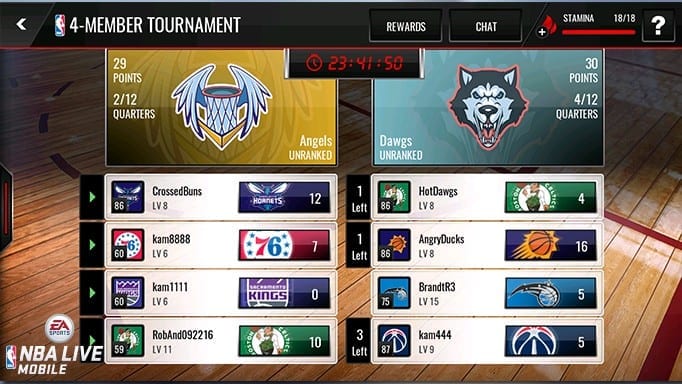 League Vs League Tournaments
One of the most requested features has arrived! You can now compete in 24 hour tournaments against other Leagues. Earn rewards and climb the leader boards with each win.

Best of all, playing in League Tournaments and completing achievements will unlock some awesome New League Master Players!

Gameplay Updates
We have continued to improve gameplay with this latest release. It’s headlined with Lineup Gameplay Styles. If you’re not familiar, the game features five line-ups: Defensive, Small Ball, Shooting, Big Man and Two-Way. This is a feature I’m really excited about. The 5 core lineups will now feel and play more unique than ever before. The Defensive Lineup plays tighter defensive pressure, the Small Ball Lineup is quick and plays Up-Tempo, the Big Man Lineup will focus on inside post plays and specializes in Rebounds and Blocks, the Shooting Lineup will pass around the perimeter looking for that open 3-pointer, and the Two-Way lineup is the jack of all trades lineup that has no particular weakness.

This will create a new strategy going into the game, especially for League vs League Tournaments. Should I take my Up-Tempo Small Ball Lineup against the Half-Court rebounding specialist Big Man Lineup or maybe use my high pressure Defensive Lineup against my opponent’s Shooting Lineup?

Here is a breakdown of a few additions to the lineups:

NBA Scores
Catch up on scores of your favorite teams with the addition of the NBA Scoreboard. Check when games start and view final scores.

Live Event Appointments
Never forget to play your favorite Live Event again. Anytime a Live Event has not started yet, just tap on the “Remind Me” button. Once the Live Event starts, you will receive a push note reminder that it’s now available to play. Try it out on some new Live Events coming your way like first to score, moving zones, sequence shot zones, and more.

Set Improvements
You can now quickly add items to a specific Set from the pack opening. Just tap the Set icon above an eligible item.

Within the Set breakdown view, the addition of the “Add All Items” button will quickly add all available items from your bench into the Set.