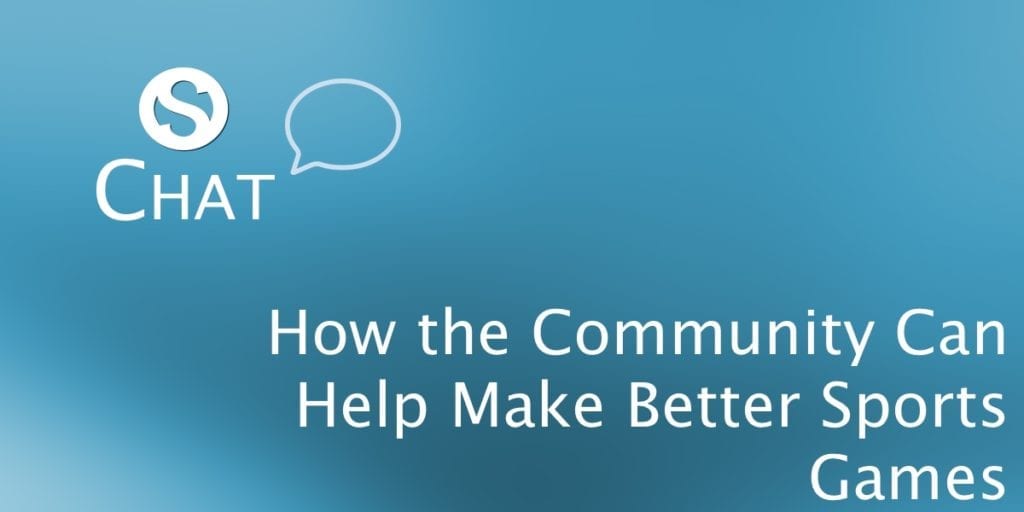 It is time once again for another OS Chat, today Editor Chris Sanner sits down with OS Community Manager Millennium to talk about the article we penned last week on how we can be better at criticizing sports games.

We’ll chat about some of the responses to that article and dive into some other topics, all while giving some tips on how we can step our games up.

Let’s get this party started!

Chris Sanner: Last week we published an article that got a lot of feedback both on social media and here on OS entitled, “When it Comes To Criticizing Sports Games, We Can Do Better as a Community”. Today myself and Millennium (Community Manager around these parts) are sitting down for a chat here on OS to talk about that article and to give some more insight on what we think and to respond to some of the comments. Read through our discussion and then take it from there!

So to start this discussion off, Millennium…we had one user (Dazraz) ask how ambitious people should be when making suggestions to developers. Should we as a community be shooting for the moon on suggestions or keeping things more practical and grounded?

Millennium: Both. There is no feedback that isn’t valuable. Small things could be something missed and large things could be ideas no one has thought of. Timing in when you do either is key – remember that most games have their feature sets locked in months before release. But while timing is a factor I believe it is less so than being clear, concise and constructive with any feedback you are giving.

Chris Sanner: I agree. My convos with guys who make the games (and you can vouch for this)…they get a lot of big ideas from the community that are kind of a pie in the sky list they’d like to tackle. And they try to do something from that each year pretty consistently. I mean you can correct me if I’m wrong, but I honestly think devs like both and like users who dream big but others who are focused on fixing the things needing fixed here and now.

Ok on another note, unlucky13 chimed in on the story and asked a question I’m going to paraphrase because I’ve heard this one a few times, “What do we do when we don’t get a response even though we’re approaching a dev pretty politely, especially when it comes to things like features I really love being removed?”

I would THINK the answer isn’t to wish they die if any of the above happens…but you can correct me if I’m wrong on that one?

Millennium: The devs see a lot of the feedback given but can’t comment directly back in most issues. If you don’t feel like you have been heard it is important to seek out a community leader for the game you are giving feedback on. Many times these leaders are posting as a “middle man” for passing information between a development team and the gaming community.

Chris Sanner: Would you say that devs see most everything that comes their way, good/bad/ugly?

Millennium: I would say devs see a good bit of what comes the way with the advancements in social media. Even if the devs don’t/can’t say anything back most if the ideas posted get back to the in one way or another. I can not stress enough that the manner in which you give feedback has a direct effect on your chances of it being seen. If you are continuously constructive than you amplify your online voice immensely. Conversely if you are destructive at every chance you get you run the risk of losing the ability to be listened to by those that need to hear you the most.

Chris Sanner: Honestly that’s the thing I’ve tended to gather from devs. If you want to be seen and want your suggestions to be heard you have to be consistent and high quality. One of the 2K guys told me you have to “stand above the pack”. I think that’s totally true.

For instance if you truly want a game to be better, you can’t just sit around tell devs to go ‘kill themselves’ or any number of incredibly stupid remarks when a feature isn’t what you thought. I’d argue those people aren’t really looking to make games better, but in the event one is — you are literally ruining your credibility to affect change. At best you’ll be muted/ignored, at worst blocked. Then what? What’s the point of that?

Here on OS its the same thing. If you come on here and act like a moron you get banned, your voice is silenced and ability to affect change is diminished. Sure it takes a lot of work to stand out but if you are truly passionate about having a better game that’s what it’s going to take. What do you think Mill? How do people stand out?

Millennium: The best way to stand out is consistency and focused passion. Give feedback as much as you can. Be respectful of everyone – devs, fans and everyone in between to receive respect in return. Understand that not everything can be fixed and allow for some flexibility in your expectations. It can hold developers accountable without requiring every single but to be immediately fixed. In short – Be human.

Chris Sanner: What would you personally say to gamers who complain that this is effectively deputizing themselves as a gaming company’s QC department? Any concerns there for you or do you think this is a natural part of being a passionate fan?

Millennium: I’d say this: Thousands of gamers can see in one day more than a QA team can see in an entire cycle due to manpower alone. The truth of the matter is that most won’t give feedback and will either play through the bugs without noticing or complain about them without offering their experiences. Those that break from these two groups are extremely valuable – they look to help make sports games better and the reward for their help is…better sports games. It really is as simple as that. If you want games be be better you can wait until the game evolves on its own or you can help push it further. It’s not a requirement for anyone, but it can be an extremely rewarding feeling to see a bug you reported fixed or a feature you suggested implemented. Is it your job? No. But it can very easily become your passion.

Chris Sanner: That complaint always seemed strange to me as well. Mainly because people say that but obviously care about how good their sports game is.

Millennium: The one big thing it think all gamers looking for provide better feedback should do is learn how to save video quickly while playing a game where it be online or offline. You don’t need to go into each games provided replay mode. All you need in most cases is live gameplay clips showing what you are giving feedback on.

A less obvious item to do less is trying to grind through issues. Sometimes your best friend can be to sit the game down for an hour and regain your composure. You simply can not give clear feedback if you are angry and it often has an effect on your in game play.

So what do you think? How do you think we can step our games up as a community and be more helpful towards the end goal of better sports games? What ideas do you have to make the community more positive and helpful than negative and hurtful?

Add your own thoughts in the comments below!

When It Comes to Criticizing Sports Games, We Can Do Better as a Community
Power Ranking the 10 Greatest Sports Gaming Cameos