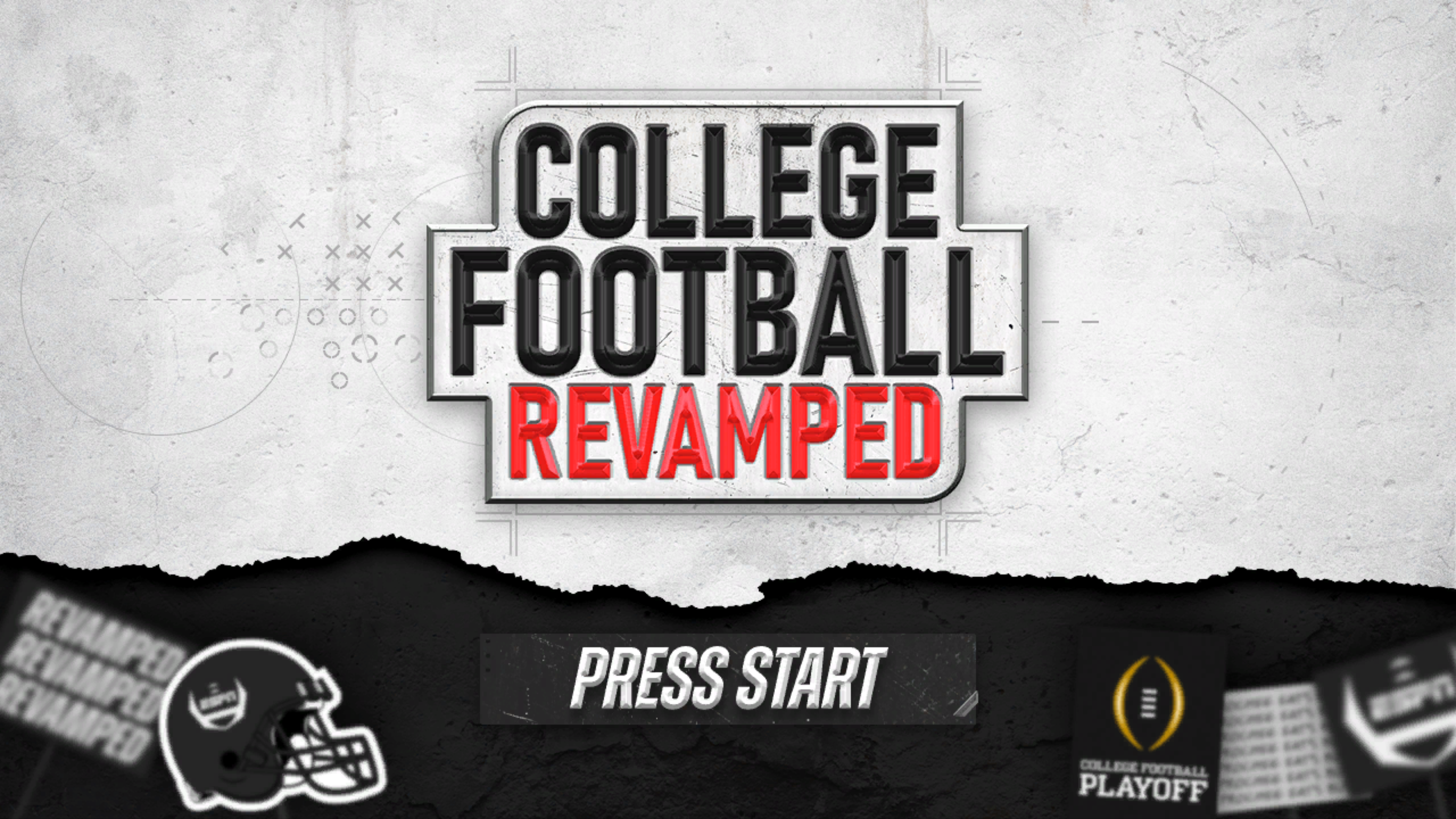 Welcome to 2021 and NCAA 14's brand new look! Everything from the in-game scorebug, to menus, fonts, and all 152 logos have been reconstructed and redesigned to match ESPN's 2020 style and give NCAA 14 a MUCH needed face-lift.#morethanuniforms #ncaa14 #collegefootball #cfbr pic.twitter.com/sjUqvaooMP

Although it has been over seven years since the last officially licensed NCAA Football game was released on consoles, my love for the sport and playing it on a console has only grown stronger in its absence. This is a sentiment that I am positive many of you share as we still cling to the hope that one day a new licensed title will find its way to the PlayStation 5, Xbox Series X and PC.

While the outlook for a new NCAA Football game dropping anytime soon seems as bleak as a Midwestern winter’s day, there has been a bit of good news that helps. For those who have access to a computer and are a little tech-savvy, not only the introduction of, but the blossoming of console emulators has started to hit their stride.

These emulators, and there are many, allow you to play some of your favorite games from the past on a current PC by emulating the older consoles and running the software as if you were using that console. The process can vary greatly, and is too much to cover in this article, but know that if this is of interest to you, there is an incredible amount of information and tutorials online.

With the release of the PS5 and Xbox Series X, we are now two console generations away from the last NCAA Football game, and the emergence of emulators is what brings me back to the original point of NCAA Football 14. Spoilers, I had already been playing a modified NCAA Football 14 for quite some time. I had not only found a way to enjoy NCAA Football 14 again with the RPCS3 emulator, but could apply current rosters and even play at a 4K resolution.

The only drawback, and it was one I was willing to concede, was the fact that teams had moved to different conferences, acquired new uniforms and helmets, and updated field art in real life. In other words, while playing NCAA Football 14 on my PC in 4K with current rosters was awesome, it felt a bit dated — until now. 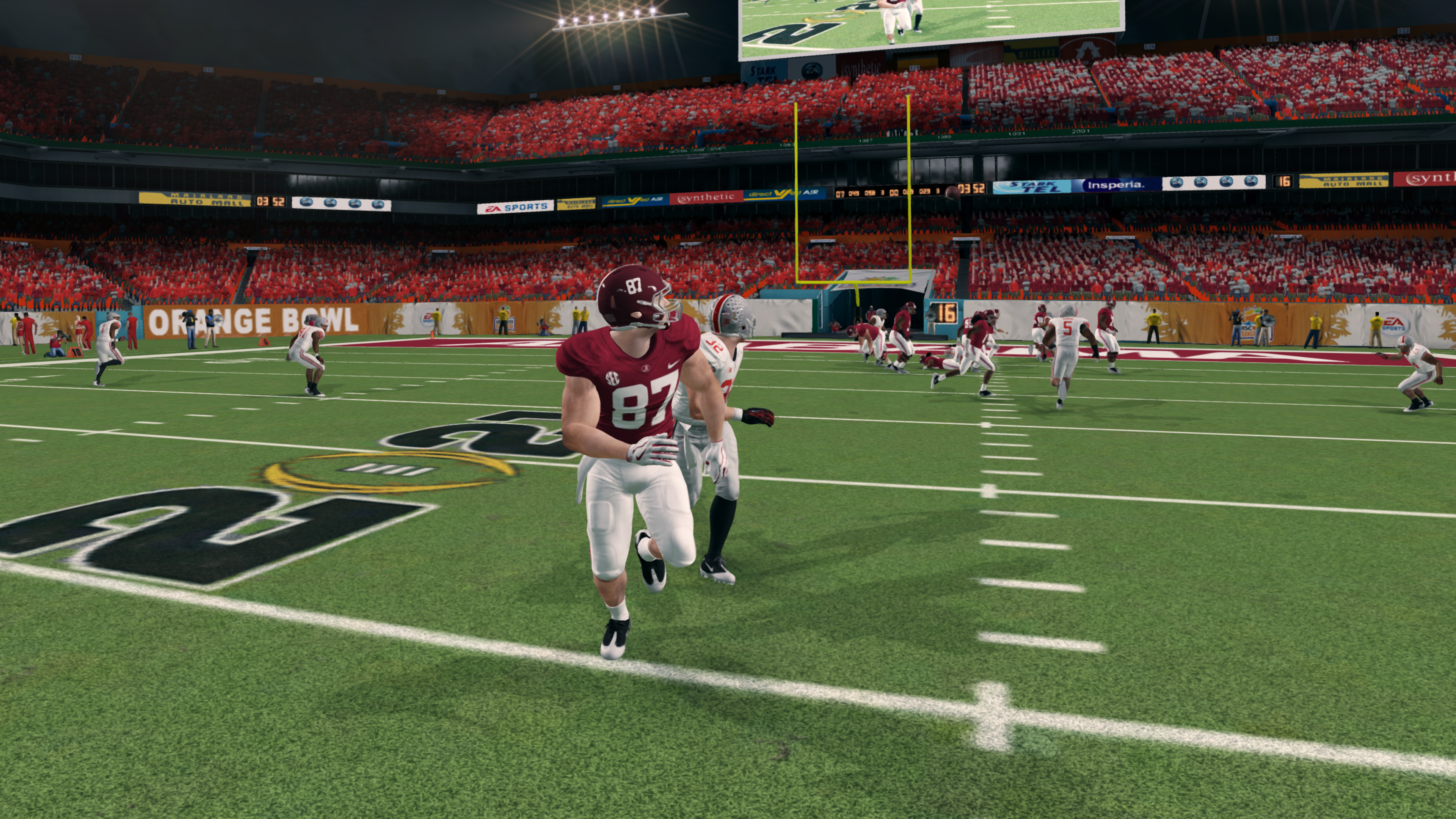 What is College Football Revamped, you ask? Well, if you’re asking me, it is the best thing since sliced bread. It is a series of in-game modifications for NCAA Football 14 that have been compiled into a single awesome package that helps usher NCAA Football 14 into the new era with updated splash screens, wipes, helmets and uniforms, logos, field art, and more.

Here is what’s new straight from the group that is behind this work. 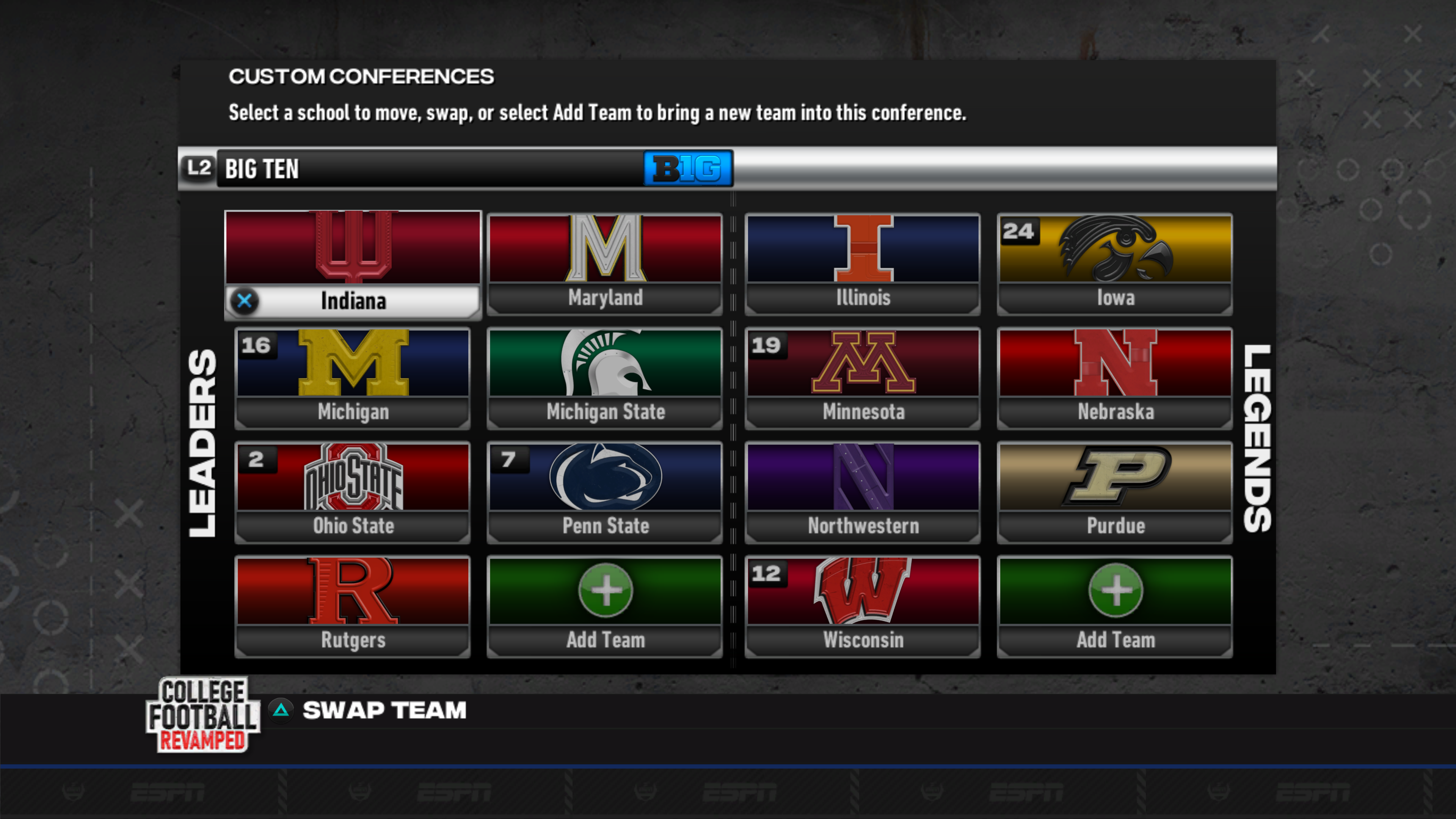 “Welcome to 2021 and NCAA 14’s brand new look! Everything from the in-game score bug, to menus, fonts, and all 152 logos have been reconstructed and redesigned to match ESPN’s 2020 style and give NCAA 14 a MUCH-needed face-lift”

“In addition to our new featured players loading screens, we have redesigned all of the pregame overlays. Our new ESPN 2020 inspired theme brings all aspects of NCAA 14 to the modern era, providing a completely new experience.”

While no gameplay changes have been made to the title, the aesthetics of NCAA Football 14 have been completely revamped, and for the better. 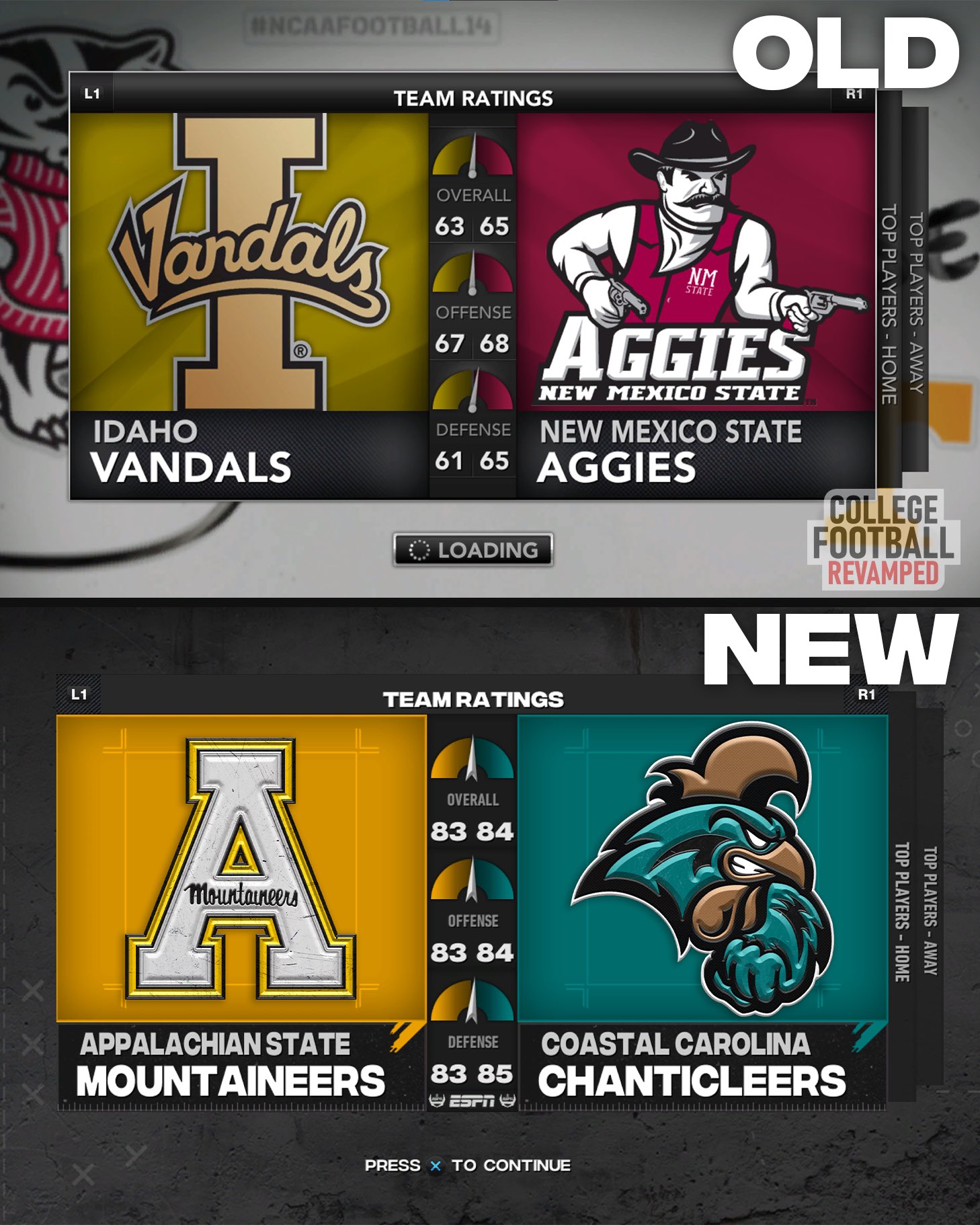 Change For The Better

Now that I have spent a good amount of time with the game post-install, there is that addictive quality that makes the game feel new again, and once again I have started a brand-new dynasty simply because of the effort and work that has been dedicated to creating this mod.

As I mentioned before, it doesn’t alter the gameplay in any way, but what it does bring to the table in terms of new screens, logos, helmets, field art, and uniforms is just as, if not more, valuable. (Plus, hey, we still have a sliders forum for NCAA Football 14.) Not only do these changes impact loading the game and its menu system, but for me at least, it alters the gameplay experience as a whole, and takes it to a level that I have not experienced before. 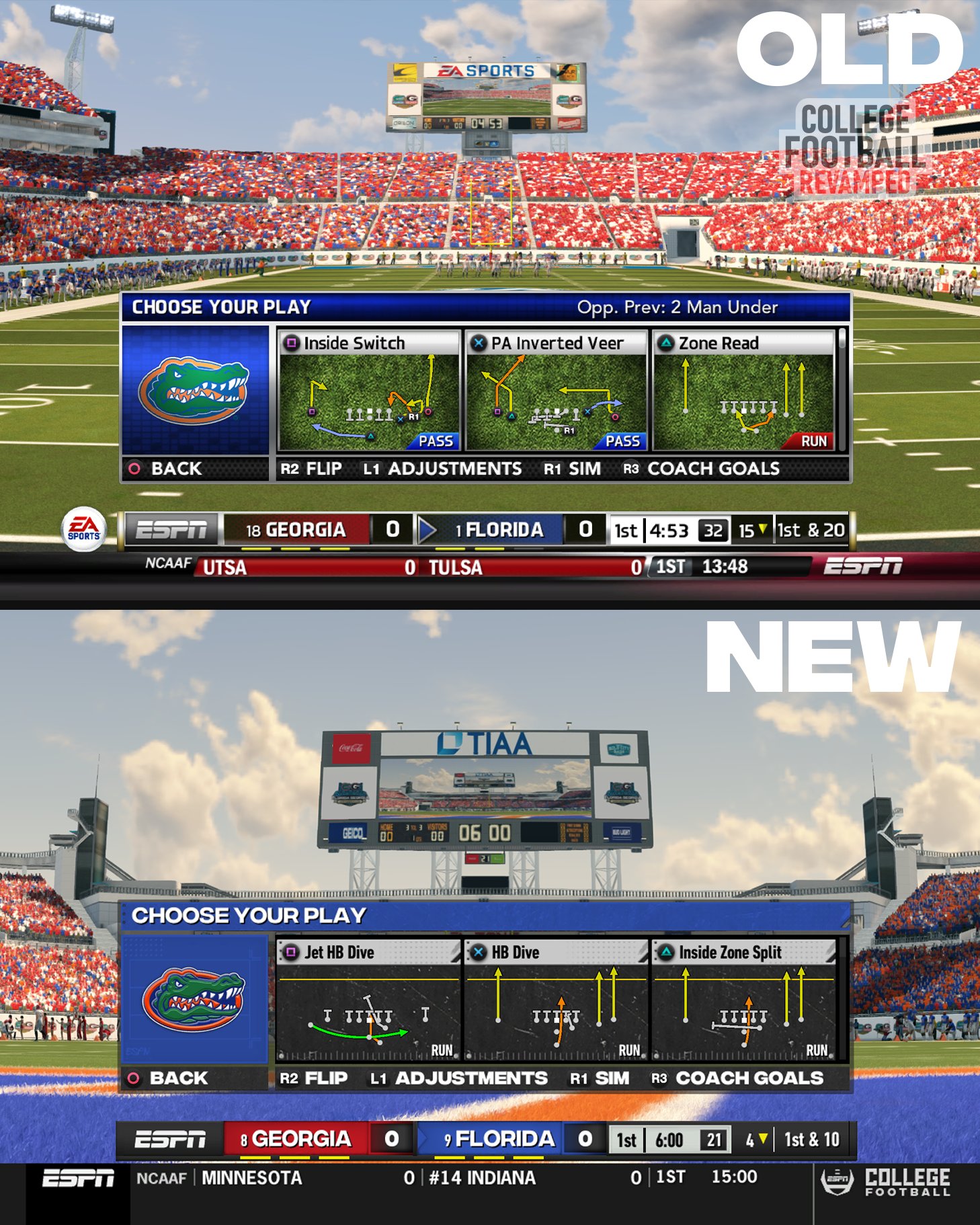 There is an immersion factor that can be felt and enjoyed, especially on the PC side of things as it offers the ability to play in different resolutions. I am playing NCAA Football 14 CFR on a stout gaming PC that can run it in true 4K, and the experience is better than when the game first dropped.

These are some big words, but the experience that has been created and delivered by installing the new mod from College Football Revamped is exactly as they describe it to be.

How Can I Play This?

The question I often see regarding the CFR mod is “how can I play this?” That’s a great question, and the answer is rather simple because the developers have been outstanding in terms of community communication. There are three versions of the mod, one for the RPCS3 PS3 emulator (which is the easiest to apply), and for those who are not aware, the mod is also available for the PS3 and Xbox 360 versions of the game. 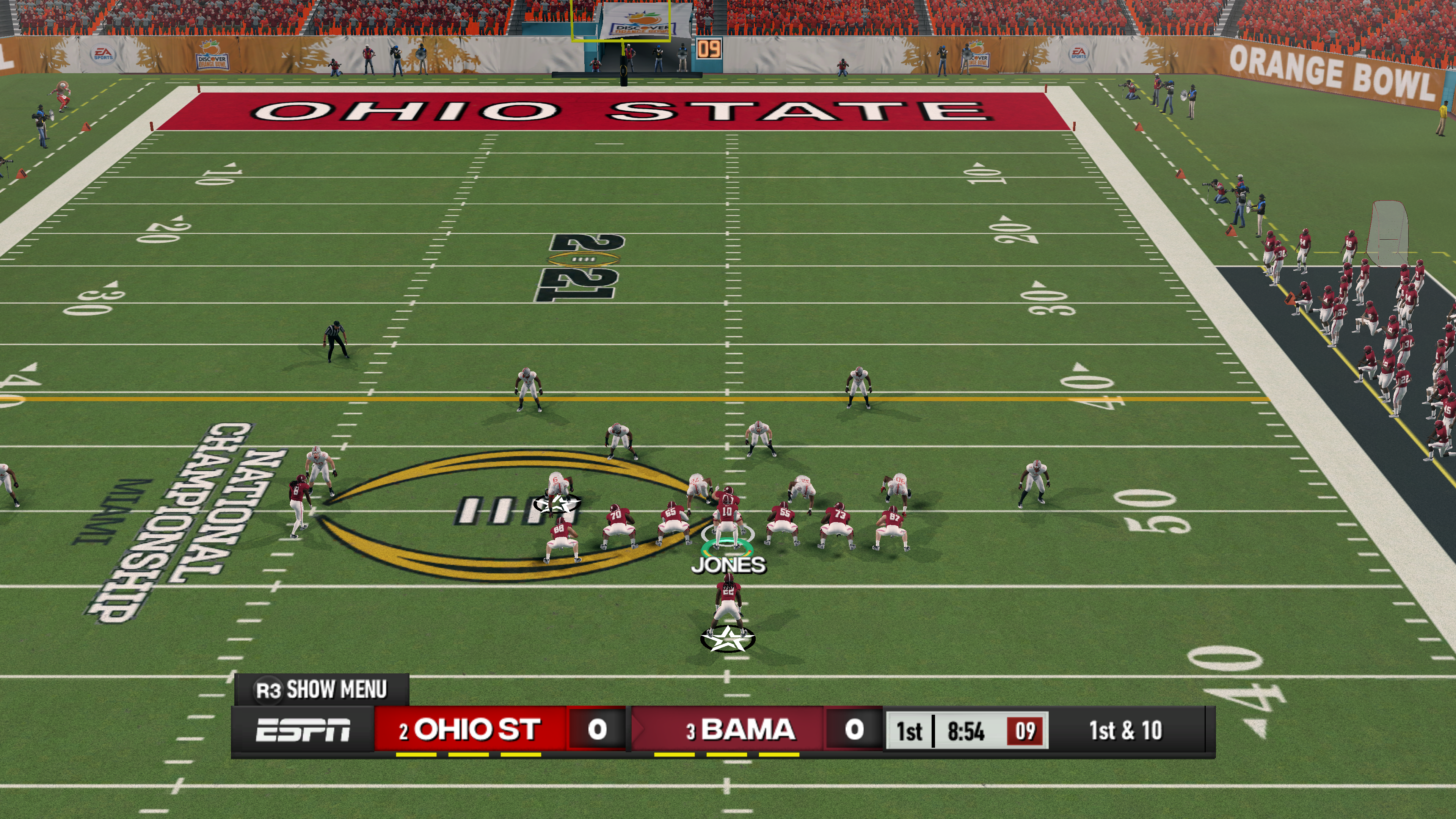 The mod is available for those who purchased the game physically or acquired it digitally for either of the respective digital stores, and the directions walk you through the process for each version.

The installations of the console versions are a bit more detailed, but again, the developers have created some basic tutorials to help and assist when they can. They are a bit stretched in the help department right now but are looking to add people to the staff to help accommodate all newcomers to the College Football Revamped experience.

Where Is The Mod And How Do I Install It?

Another big question, and rightfully so, is how to get my hands on this mod? Thankfully, there are solid walkthroughs on how to acquire the free CFR experience mod, and how to install it, which I have linked below. They also have a Discord for those who either need help or want to follow along with the updates as they become available.

The main site has all three options listed, and how to install it for each system.

I speak about this mod with adulation, and for good reason. These creators have taken an all-time favorite of mine (and many others) and brought it up to date as much as possible.

While it may seem like a daunting task for many to get this mod installed, especially on console, the developers have tried to create a process that is simple and easy to understand. For the PC side of things, it took me all of 10 minutes to download and install the mod. For the console side, I have been told by others who have attempted and accomplished the install that it took roughly 45 minutes to an hour.

Even though the mod is available now to be played, the developers are still hard at work and will continue to support the mod for the foreseeable future.