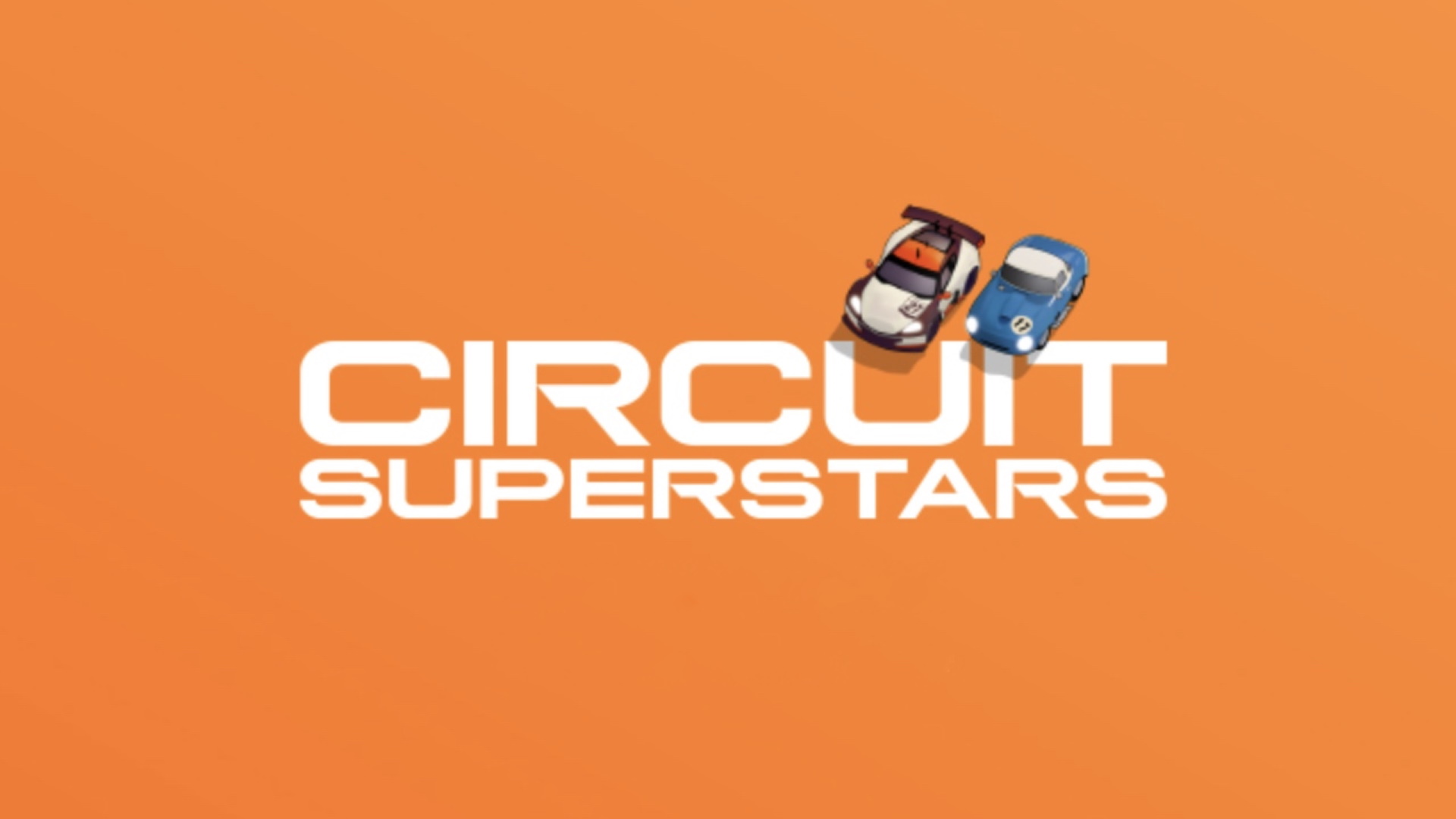 As of late, the racing genre has been packed with titles that have delivered deep experiences, and licensed IPs that have taken fans straight from the TV to the world of video games. Often, it seems like I am reviewing one AAA racing title and the next one is in the queue already. This is not the worst problem to have as a reviewer, and I welcome it because it means the racing genre is as strong as it has been in a long time. However, with so many titles in a certain genre some slip through unknowingly, and if not for a few friends of mine in the real world of NASCAR, Circuit Superstars Early Access from Original Fire Games would have done just that.

A game that has been in some form of development for almost five years now has Square Enix as its publisher, and it finds itself ready to move towards a full release. Although the game is still considered to be in Early Access on Steam, there is enough depth and content to warrant an in-depth look. If you’re not familiar with what Circuit Superstars is, it is a “top-down” racing game that is built by racers for racers. A game that pits you against others on different circuits against either a very formidable AI or random players online.

Circuit Superstars offers multiple vehicle options, and they range from off-road trucks to muscle cars. The graphical style is also unique. It looks more like a Saturday morning cartoon — for those old enough to remember those. But as we will discuss later, please don’t interpret that description as a game that is for kids or offers nothing unique and realistic once you hit the track. 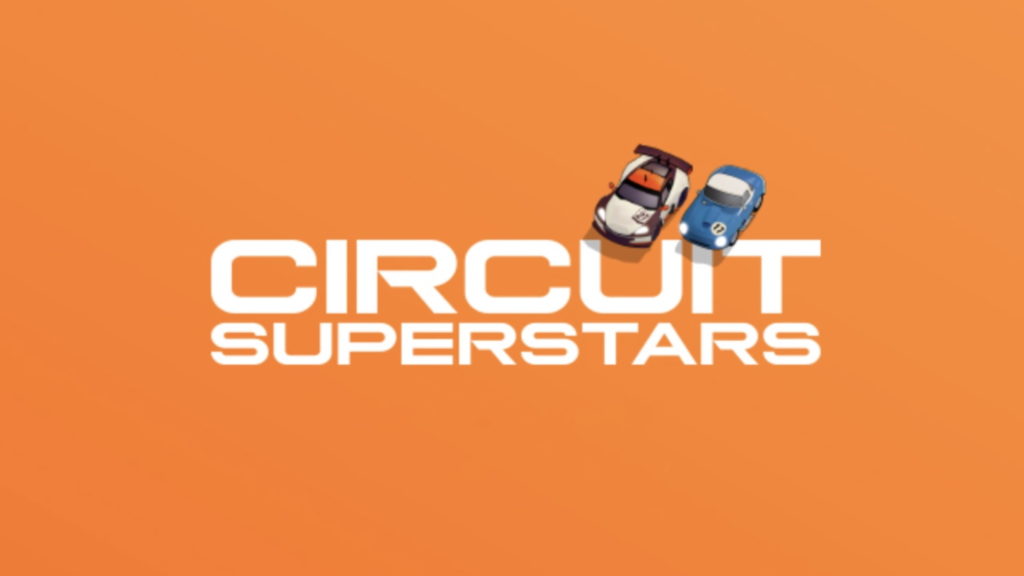 Although Circuit Superstars will be depicted as an arcade racer — and it should be — there are aspects of Circuit Superstars that scream simulation. Much like any racing sim that you would find on the market today, CS required me to have a full understanding of the track, the vehicle I was racing, plus tire and fuel management.

When I first played the game, the expectations were merely to experience a decent arcade racer that offered very little depth and even less realism. Obviously, my claim is not to state that CS is it racing simulator, but it is a blend of arcade and simulation, or “simcade” if you will. 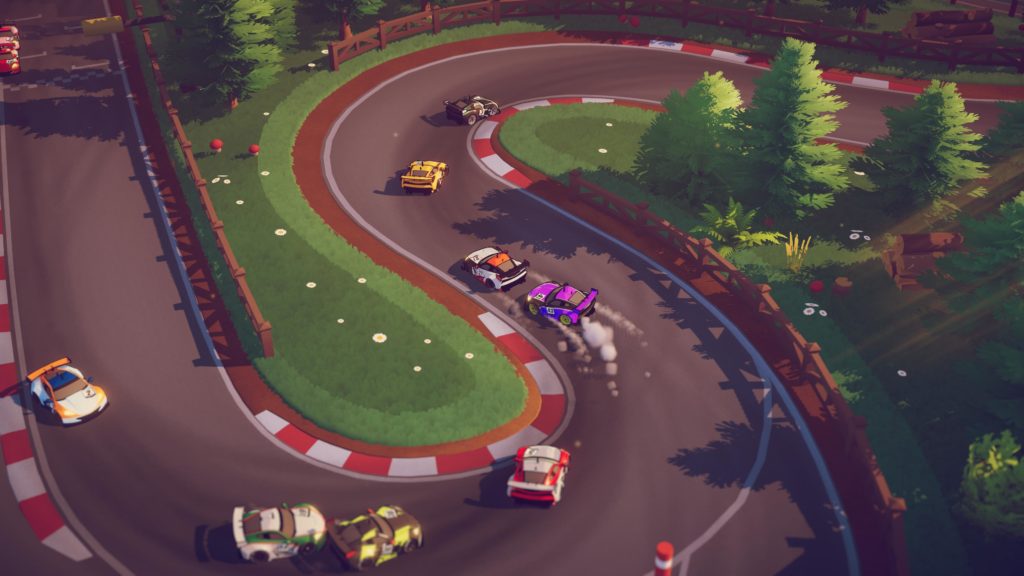 CS requires you to understand that your actions on the track have an impact on your tires and fuel, and your overall performance throughout the race. If your approach is to burn up your tires and try to knock your opponents out of the way, it’s your car that’s going to pay the ultimate price in the end.

Also, your approach on the track is just as important as how you drive. CS offers six fully detailed tracks at the moment, and each one is unique and offers its own set of difficulties. 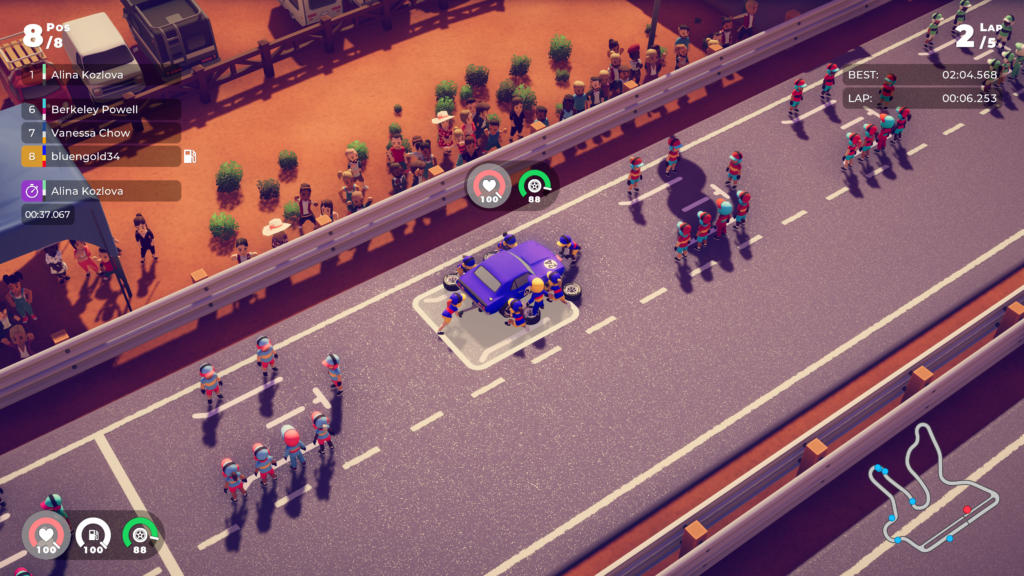 The more experienced I became while racing Circuit Superstars, the more I began to understand how to properly approach executing a turn and how to pass an opponent properly, which was surprisingly difficult at times. There is a high level of intensity depending on the level of difficulty that you’re playing at when racing your opponents, and if those are opponents are random players online, that intensity is amplified.

While CS may have a look of an old arcade game like Off-Road, it handles wonderfully with a controller. This is important because you often have to feather both the brake and accelerator. In the end, the racing is packed with adrenaline-inducing fun and requires a focus that I was not expecting to experience from this type of game.

I do love licensed racing titles, and racing at venues that are famous around the United States and globe. That said, there is something to be said about the creativity that I found with each track in Circuit Superstars.

Currently, the game offers seven circuits to race on, with two of those offering variations of the track. The tracks range from all pavement to a combination of dirt and pavement, and when choosing a vehicle for each race it’s important to understand what track you’re racing at because it makes a difference. 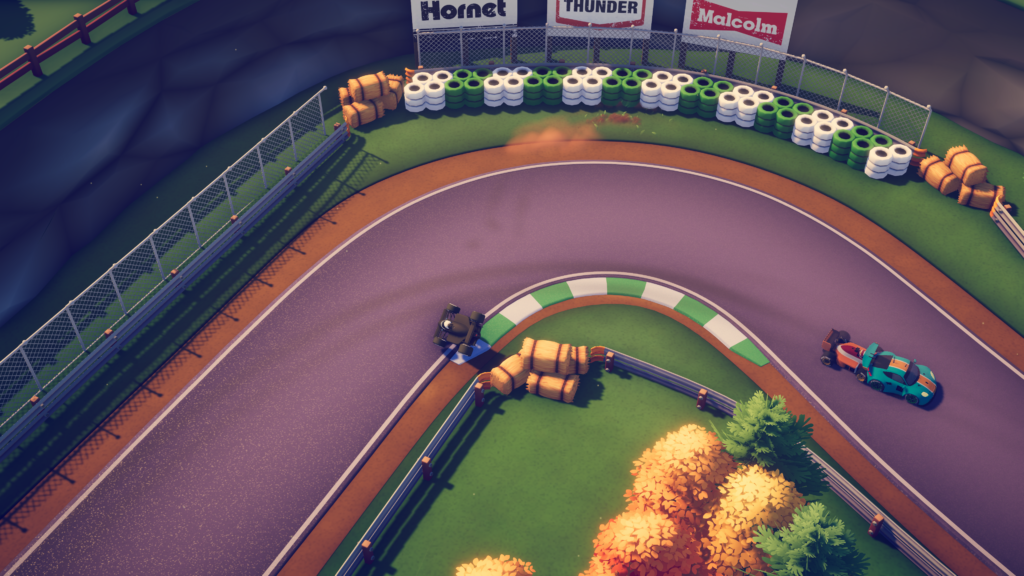 Each track also offers a different surrounding, and depending on which venue you’re visiting, the aesthetics of that track and venue will come in to play. In my time with the game, and I’ve mentioned this before, I found it imperative to understand the track. I cannot overemphasize this statement enough. For me to have a modicum of success against my opponent, my focus needed to be on the track itself and racing it properly.

It was painfully obvious during each race if I lacked a true understanding of the nuances of each track — and consistently showed in the final standings.

As of right now, the customization options included in Circuit Superstars are limited, and that is to be expected. The game does offer you the ability to repaint each vehicle by utilizing a color wheel, changing the number for each vehicle, and re-designing your race suit and helmet. 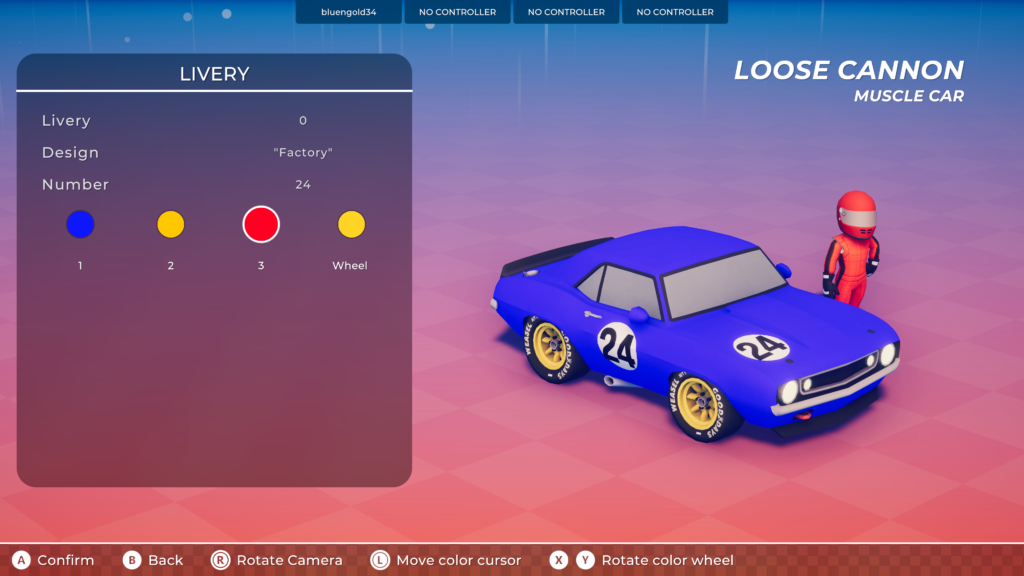 With Early Access for any game, you’re going to run in to limited options that you would not see in a fully fleshed out title, and Circuit Superstars is no different. There is talk about adding more content and more depth to the customization options moving forward, but as of now it’s just that, talk. 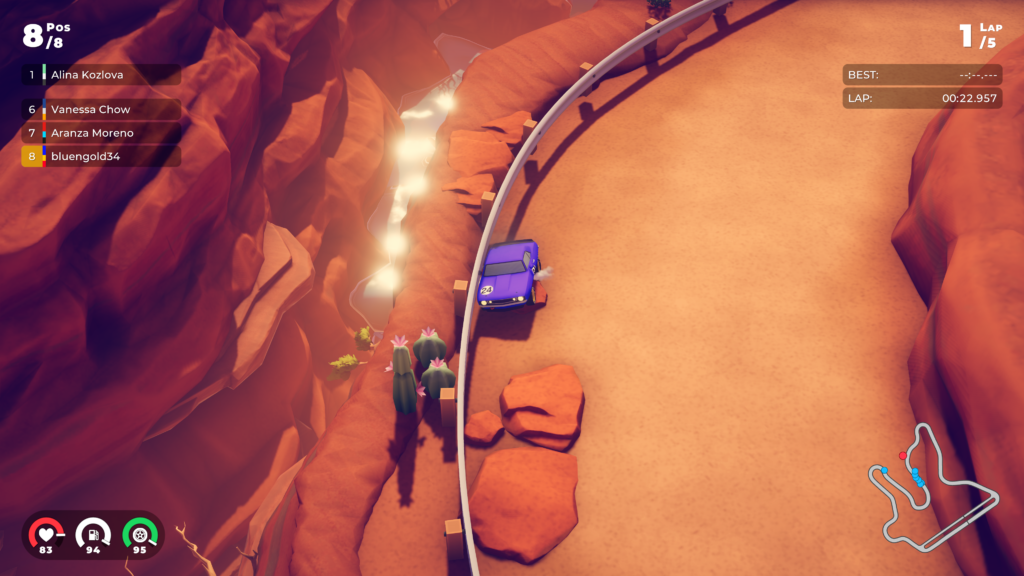 What’s even more impressive is the small details that are very notable, even during a race. My personal favorite is an animated pit stall where, if you’re not careful, you will hit one of the pit crew members. Now, hitting the pit crew member should not be hilarious, but it is, and I feel bad for thinking so.

It will be interesting to see how much further the developers can push this game in the animation and style department. However, even if they didn’t make another improvement to how the game looks, I would be quite satisfied with the status of how it runs right now on my PC.

What I Hope To See Moving Forward

As I mentioned previously, Circuit Superstars has been in development for almost five years, but it’s still categorized as Early Access on Steam. The developers have been vocal regarding what their plans are moving forward, and yet they still seem open to ideas from the community — so I have a few.

I’ve already mentioned that the customization aspect of Circuit Superstars is something I enjoy, and I think most of the community does as well. What I would like to see is the ability to create personalized liveries for each vehicle. The concerns about certain types of creations are always going to be a worry, but I think there is a happy medium that can be found here.

In no way is this an indictment of the seven current tracks that are included, as they are well thought out, detailed, and exciting to race on. What I would like to see is a simple track creator that would allow community creators to develop and upload their own ideas because this racing format is primed for custom tracks. 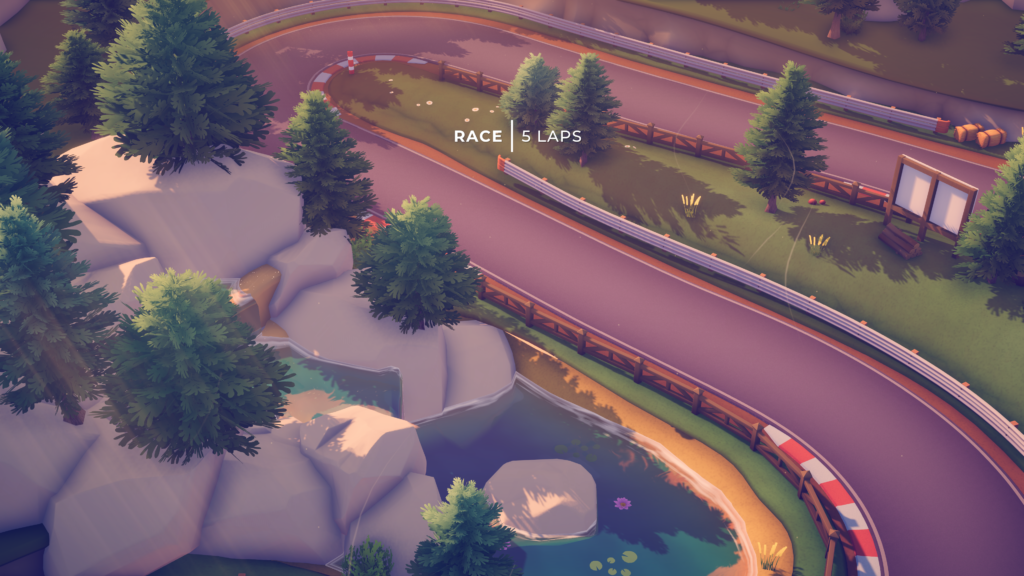 This rings especially true if at some point the developers choose to include a season mode. It would allow creators to develop and distribute replicas of real-life tracks as seen in F1, NASCAR, IndyCar, and many other pro series across the globe.

For me, a season mode seems like a path the developers need and must take. Online play in this game is a lot of fun, but that doesn’t negate the fact that his season mode would create an awful lot of longevity for people with a single-player mindset.

With the number of vehicles that are included in Circuit Superstars — plus all the different styles — a season mode would allow you to play different disciplines and race multiple seasons without the need to race the same one over and over. 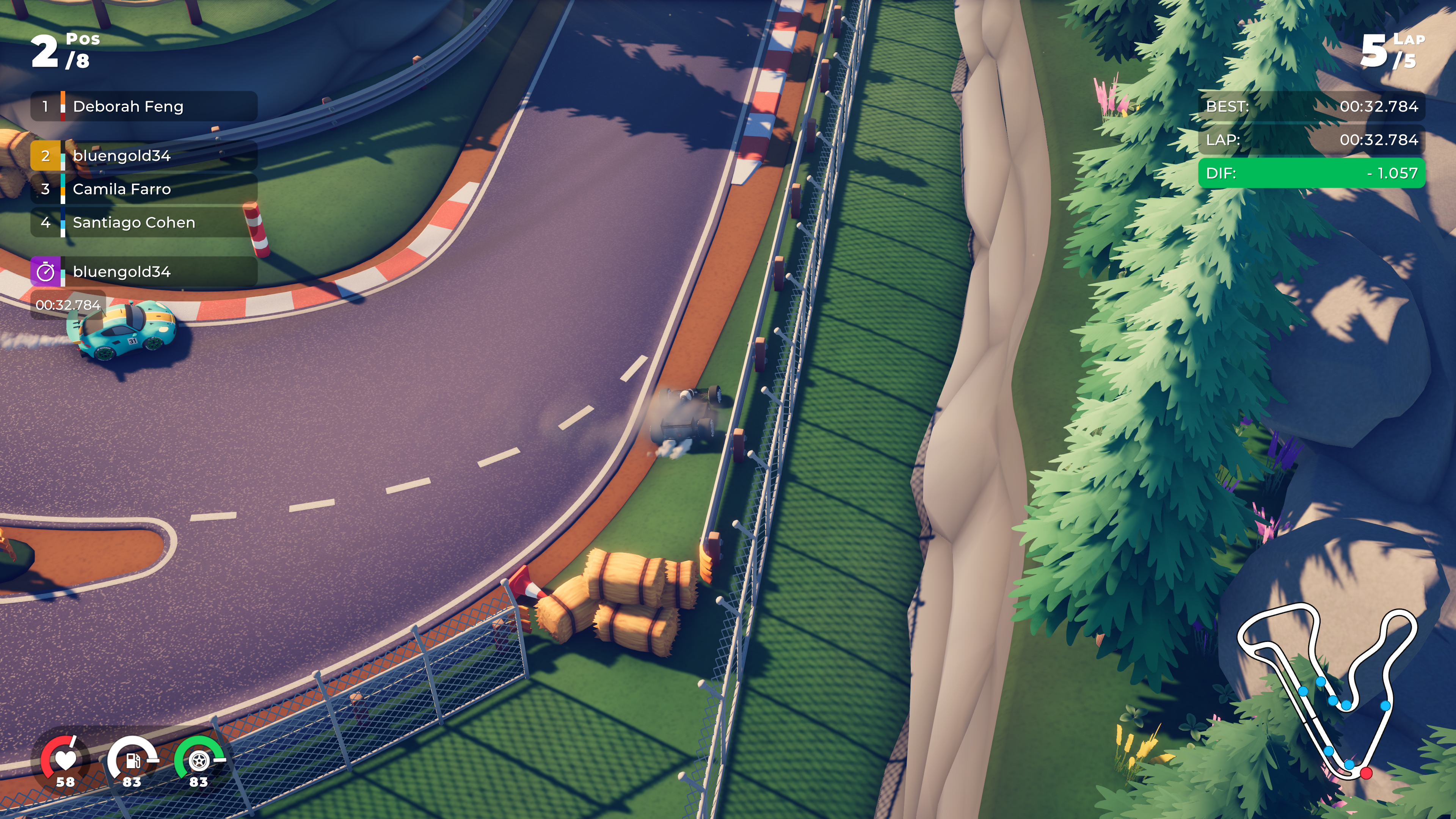 As for what is next for Circuit Superstars, well, I’ll let the developers explain that themselves:

We want to approach Early Access slightly differently from how others have done before. Instead of putting down a road map with a list of items and dates that we may or may not hit, we are going to list what we are working on NOW and what we plan to work on NEXT (you may have seen these lists if you are part of the Discord community).

The reason behind this is that game development isn’t always linear. Things may arise which will need our dedicated attention (such as the Time Trial bugs and Error on start-up) and as a six-person team, we may need to shift attention from one feature to tackle what had popped up. With our NOW and NEXT list, we can have a balance between more content, improved functionality, tweaks, and fixes while also working on a console build (we know you’re all on Steam but our console friends would love to play Circuit Superstars as well).

Now if you don’t see something on our NOW or NEXT list doesn’t mean it’s not in the long-term plan. We have already had many suggestions put forward (either in the Steam Forum or in the Discord) and we really value hearing your ideas. Also, once we’re out of Early Access, the development doesn’t stop for Circuit Superstars, we will be looking at adding more content (some free, some paid for) once the base is in place.

Now without further ado here’s the current now and next list:

To me, the most important aspect of Original Fire Games’ proverbial “roadmap” listed above is a mention about the game being ported over to consoles — and in the very near future. This game is simply too much fun to be a single-platform offering, and I am genuinely excited to see what the future of Circuit Superstars has in store for the community.