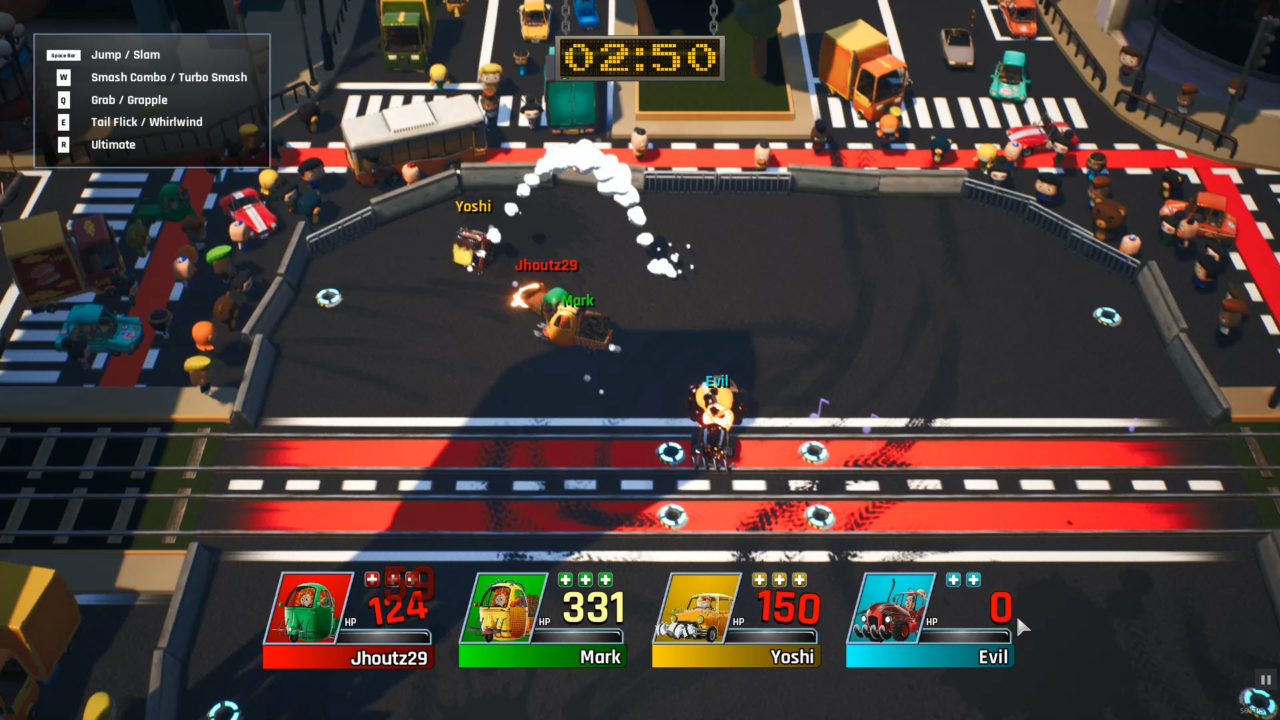 There are plenty of racing games on the market. However, some of them don’t allow you to do anything other than, well, race. Until this very day, Rocket League remains one of my favorite games of all-time. It is so simple, yet so refined. Twisted Metal is another classic example of a video game franchise that strayed away from the common car game, and instead got into the more twisted side of destruction.

Now, thanks to the folks over at 3DClouds, we have CarRumble — or CARRUMBLE as they call it. It is a destructive car game that is free-to-play on Steam. Here is the pitch from 3DClouds, according to the Steam write-up.

CARRUMBLE is a free to play online brawl fighting game, in which 4 players face off in dynamic arenas aboard a wide range of customizable vehicles each characterized by a unique appearance and special move!

So, with some time to spare over the holiday season, I decided to give this game a run for its money.

Like any video game, the first thing you must do is get familiar with the controls. CarRumble allows users to use a controller or a keyboard. For these impressions, I decided to use the keyboard, something I’ve struggled with in the past. It was a smooth transition this time around, though there were times when I would find myself tapping the wrong key. Overall, however, it was a lot better than I anticipated, which probably had a lot to do with the simplicity. Plus, the “how to play” tutorial helped.

As you would expect, the directional arrows control which way the car moves. The space bar dictates whether your car jumps or slams your opponents. The W key can be used to smash, while E performs a tail whip. If you’re interested in grabbing your opponent up close or using a grappling hook from afar, Q performs this move. Lastly, the R key is used to finish an opponent in what is referred to as nothing other than the final blow. This can only be performed with pink nitro, which we will discuss a bit later.

Much like most arcade games, CarRumble follows suit with eccentric animations that can be far from realistic. So, keep this in mind while you’re using a tow truck to flip into the air and flatten your opposition. Or, when you use a grappling hook to pull your opponent closer to you like Scorpion in Mortal Kombat — only to toss them aside like a weightless piece of paper. For as simple as the game is, there’s plenty of ways to destroy your enemies.

And part of the fun is cruising around the different arenas looking for different ways to inflict pain on your opposition. Throughout each match, different power-ups will appear that can make or break your bout. These range from green nitro that restores health, blue nitro that enhances damage, or pink nitro that allows you to use the rare and match-defining final blow. The name says it all, but using this special maneuver will put an end to your opponent.

You wouldn’t know this is a car game based on the different areas, vehicles and match types available. Three game modes can be played both online and locally. Those game modes include Brawl, Survival and Sudden Death. Sudden Death is exactly what the name implies, and you and your three opponents will battle until one car is left standing. No respawning and no extra lives. This is sudden death, triple overtime, Game 7-type stuff.

Brawl is a timed game where players can respawn as many times as necessary. The only way to win is to have the most points at the end of the round. This includes kills, the damage inflicted and times killed. Survival is similar, but only gives users a set number of lives. Basically, think of it like the different ways you can play Smash Bros.

Somehow, I have gone this far into the article without touching on the different arenas and cars at your disposal. There are many cars for you to choose from, each with a wide range of unique functionalities. These vehicles include classic sports cars, dune buggies, taxi cabs, tanks, tractors and everything in between. Most of these cars can be unlocked with hours of gameplay but this is also how 3DCloud hopes to make a profit. These vehicles continue to get upgrades from time to time, so there’s no limit as to what the developers could incorporate in later updates.

As for the arenas, players can duel it out in wrestling rings fully equipped with a destructive steel cage, an open mall during the holiday season, construction sites, edgeless platforms and much, much more.

In the end, CarRumble is a nice change of pace from your average sports game. Unfortunately, the fact that it is online-only and has limited number of game modes means that the game can become stale rather quickly. However, for those of us looking to get a quick game in late at night or while the kids are taking a quick afternoon nap, CarRumble is the perfect escape from reality.

And when compared to many of the other free-to-play video games on the market, I find myself coming back again and again to wreak havoc on my foes.