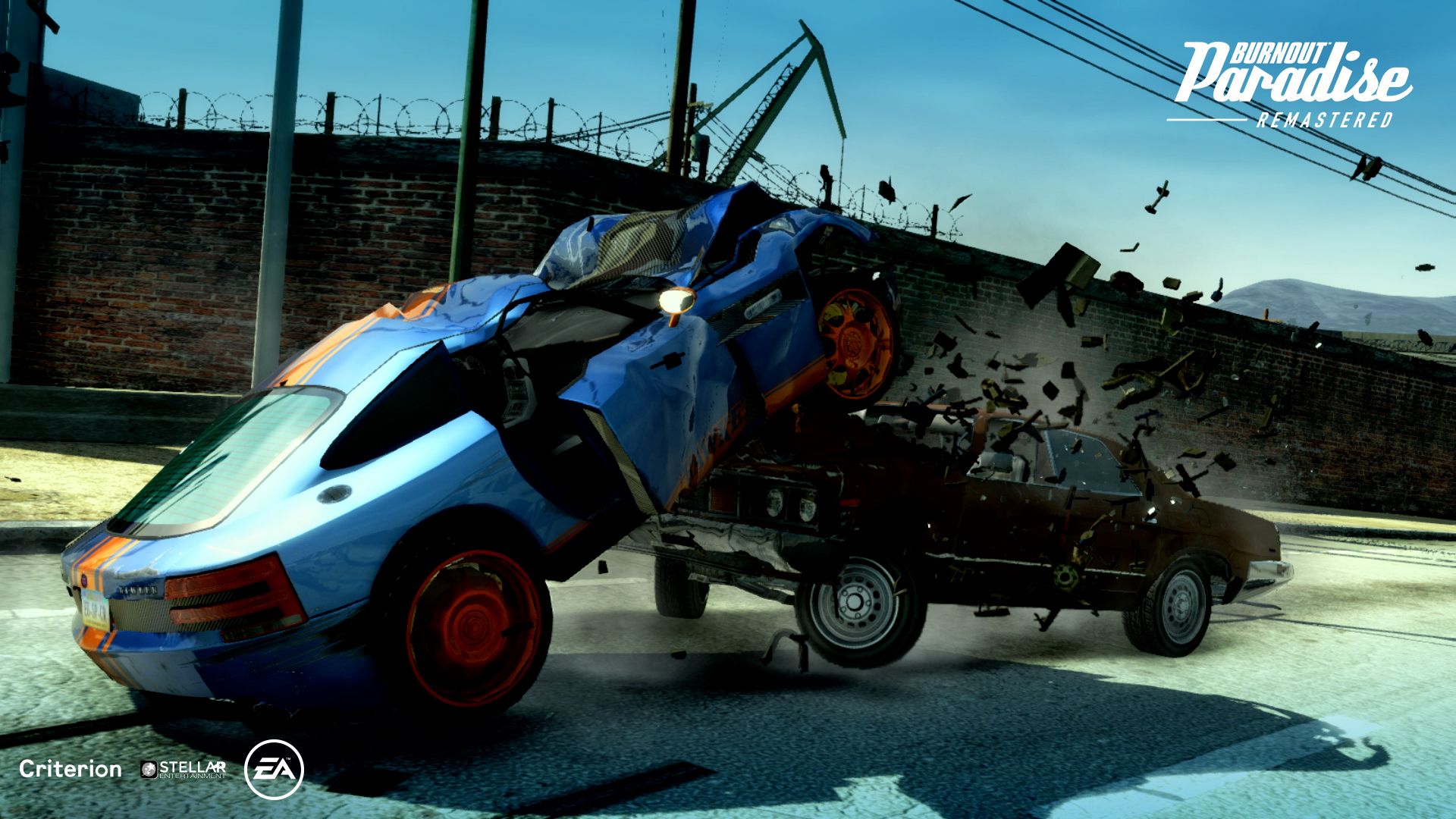 When I hear the opening riff to Paradise City, I still get transported back to Burnout Paradise. That song has been in a million things and played at countless events, but my mind jumps to the junkyard car falling from the sky. I was late to the Burnout Paradise party. I avoided the title until it become a discount Greatest Hits title, and even then, I could not stand the open world to the point that I at most reached 25 percent completion before selling the game on eBay. The latter steps of this process would repeat more than once, as an insatiable craving for the arcade racers of yesteryear fondly brought my mind back to the quarter-guzzling Cruis’n series and middle school summers playing the original Burnout. I loved Burnout: Revenge the most, but every so often, the allure of “open world Burnout” would catch my attention.

Naturally, when the remaster was released in 2018, I was ready to hop back in and truly give the game the attention it deserved. Patiently, I waited for and pounced on a juicy PSN sale, and I was completely immersed in Paradise City. Remastered is unquestionably one of the best entries in the Burnout series, even if the open world gets stale from time to time, and I played it for obscene lengths on the PS4.

That being said, it felt odd at that time when it was not only not announced for Switch, but an EA rep confirmed that they had “nothing to announce” about a potential Switch port. After all, the Switch’s non-Mario Kart racing offerings are not exactly plentiful, and a revamped classic from the previous console generation frankly felt like an obvious priority and easy win. Remember, too, that this was right around when the Switch was really taking off and defying expectations. Especially considering how great the game is in shorter and smaller doses, Burnout Paradise felt like the perfect EA Switch entry.

EA would eventually come to their senses, so here we are. But is it too late?

Have you ever had an older family friend or relative walk in while you were playing a sports title and ask with a bewildered tone, “Is this a video game or a real game?” I felt that similar elderly mystification when I pulled the Switch console off the dock and played Burnout in handheld mode. I could not believe my eyes and kept waiting for performance to drop. After all, this is Burnout and things move at lightspeed. Even though this is technically an older game, I still was shocked to see zero frame rate dips in handheld mode. 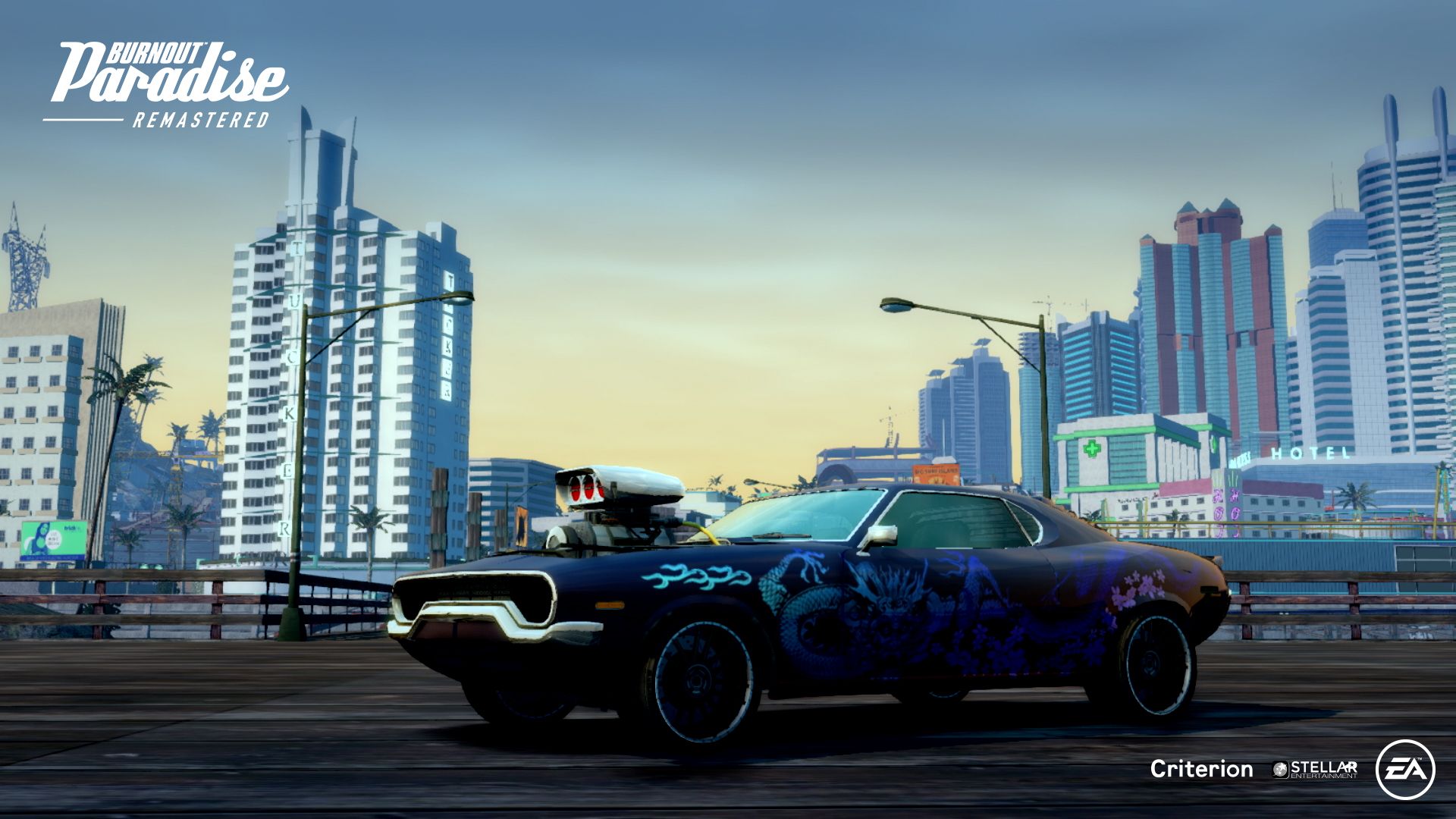 When they say 60 FPS in handheld, they mean it. The fastest cars piling up on the screen at the same time do not slow this game down. There are also no Cruis’n USA draw distance issues. Everything is visible, even though the screen is much smaller (which can complicate things). It is equally smooth in handheld and docked mode, which even for a game that initially came out 12 years ago (more on that later), triggered some profound amazement from me.

Just make sure you don’t snap the Switch in half playing it in handheld mode. I had to delete the iOS version of Crazy Taxi because, despite what my brain would logically tell me, I was certain that pushing the phone screen harder directly translated into the taxi driving faster. I learned that lesson before it was too late this time around, and you can do the same.

Some readers may be encountering Burnout Paradise for the first time, so here’s how the open world works. Players drive around Paradise City discovering different types of events that are activated by pressing the shoulder buttons together at an intersection. You are presented with a destination and an objective depending on the event, and you have the entire city at your disposal to get there. You can take as many shortcuts or whatever routes you want, and the game alerts you to good turning opportunities by flashing the street sign at the top of the screen. 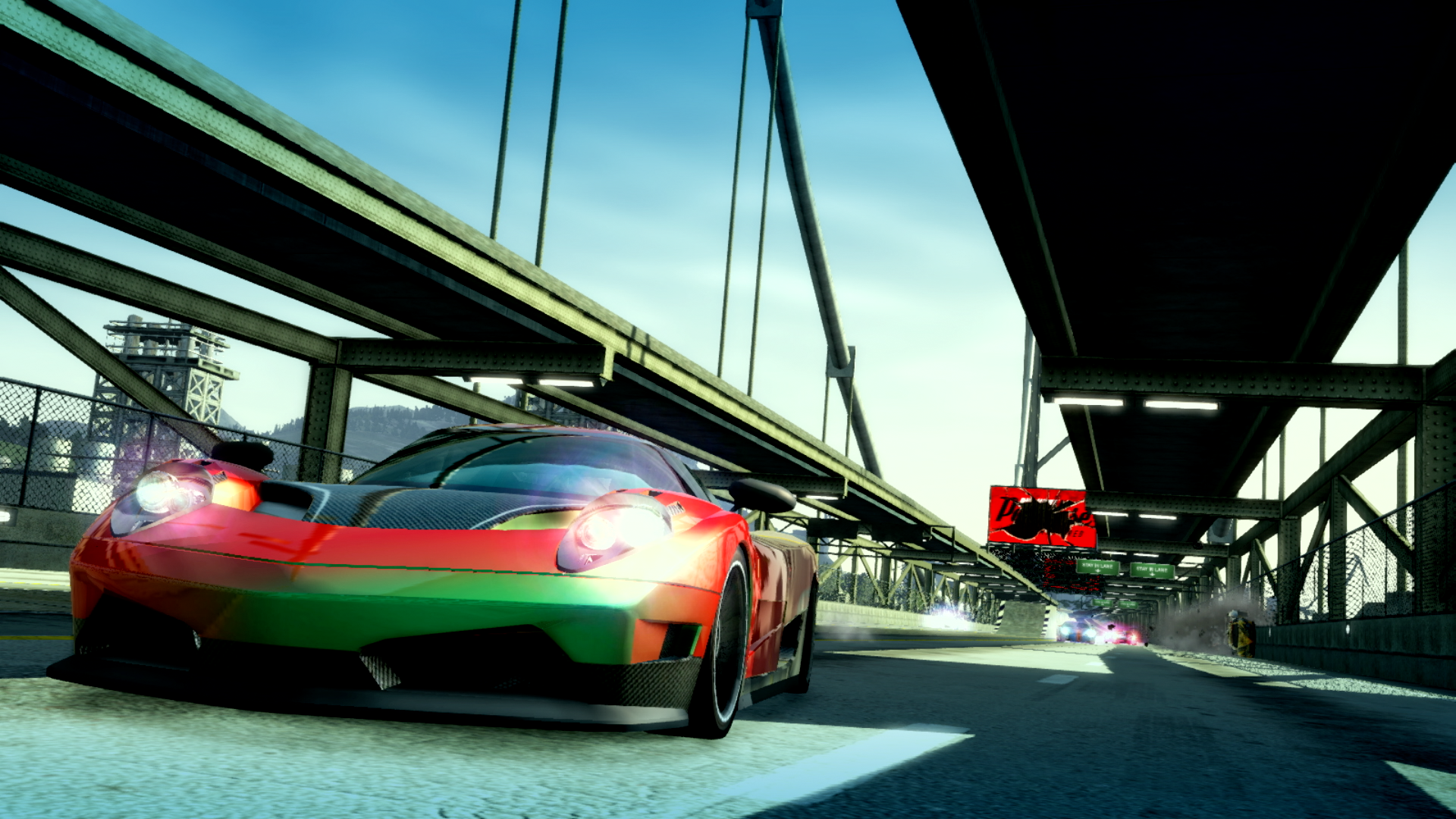 It was a profound idea in 2008 and remains a revolutionary take on the genre. Online play works similarly as all users are thrown into the same map and participate in challenges while races are queued up.

The Charm of Paradise City

One of the biggest elements of the game’s charm is the environment and atmosphere that the game creates. For those unfamiliar, the fictional Paradise City appears to be an amalgamation of a handful of West Coast cities and windy Midwest backroads with a busy East Coast downtown area.

Though the series is rooted in brutal vehicular carnage, the affable Crash FM, a radio station that playfully condones all otherwise illegal street racing behavior, pulls you into a bizarre world that remains strangely familiar. Paradise City is just a beautiful utopia where stunts and racing are encouraged and celebrated, and no one ever gets hurt. It is wholesome and unique, and a beautiful backdrop for classic Burnout carnage.

Seemingly endless heart-pounding events and incredibly varied cars to unlock make the game’s main mode a delightful take on traditional career modes. It’s a simple formula that still works 12 years later. You start out with a junker and a license, and as you win events, you unlock new cars to “shut down” (forcing them to crash when you see them in the wild).

This unlock system pairs well with a numbered amount of Super Jumps (indicated by flashing blue barrels that immediately trigger an increase in heart rate when you see them in the wild) and objects to smash through (billboards and yellow gates that dictates shortcuts).

Allow me to state the obvious here by mentioning this is a re-release of a 2018 title that remastered a game that came out 12 years ago. All genres in gaming have seen incalculable growth in 12 years (aside from franchise modes, but that’s another story for another time), but remasters typically do not offer a ridiculous slate of game updates. Players get exactly what’s expected: the full original game with updated textures, 60 FPS both docked and handheld, and all DLC included. 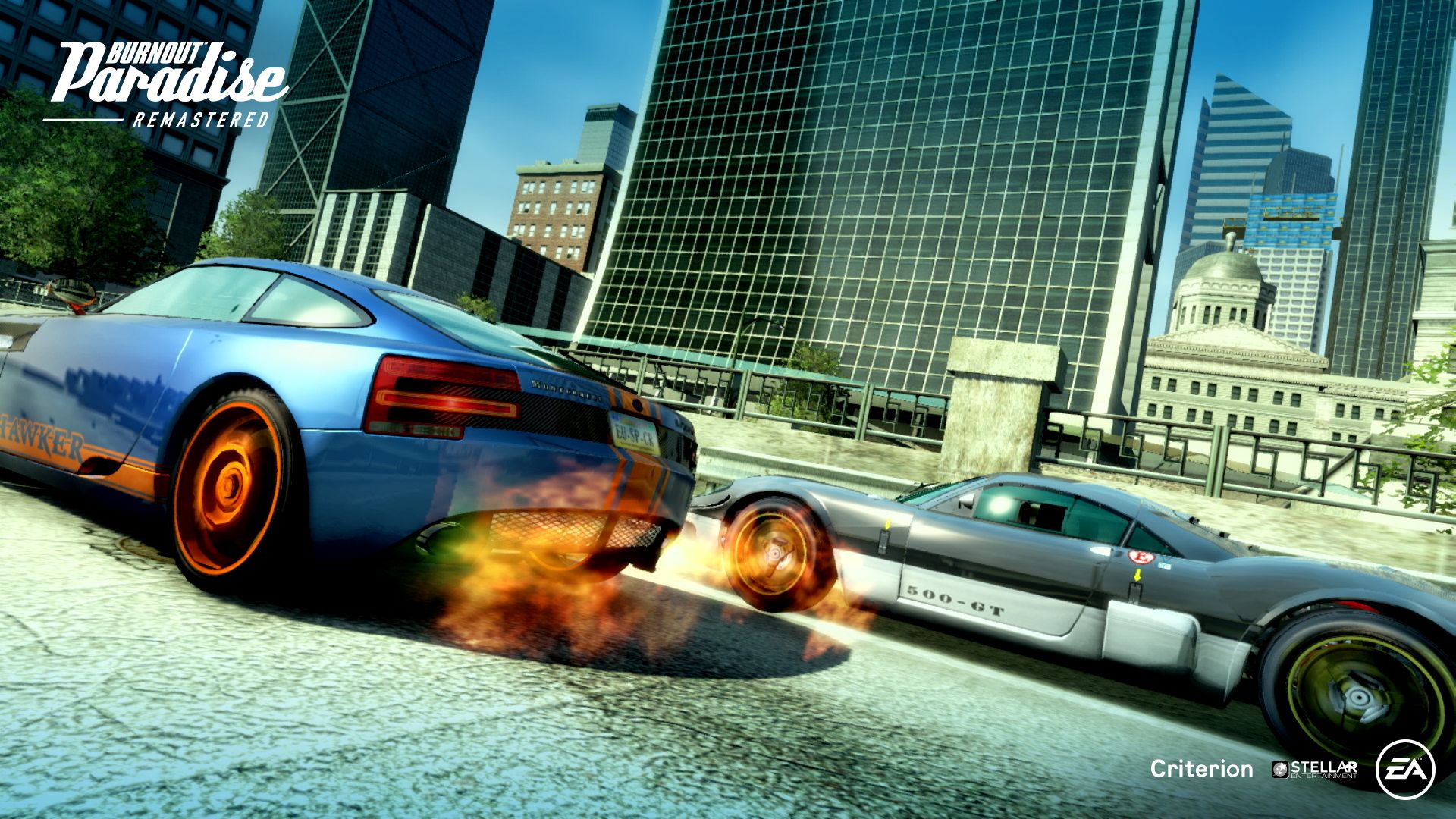 Discovery trackers “help” to keep tabs on what players need to do next for 100 percent completion, but they are rudimentary, outdated and not too intuitive. There are some graphical sacrifices that are made to keep the frame rate at 60 even while docked, and these are somewhat magnified when playing handheld. Textures and lighting do not always look 100 percent spot-on, but I personally got over it considering the consistent 60 FPS.

Again, I’m not looking for a boatload of new content, cars, or events but there are a few other gripes that could have been addressed that instead intensify the rare times when the game feels dated. I would have loved a quick “return to garage” option as getting trapped in the Silver Lake area in the northwest corner of the world map can be a pain. Multiple races will have the Crystal Summit Observatory or the Wind Farm as the final destination, and once you complete all of the events that begin in that area, you will find yourself with nothing to do post-race. That long, winding drive back to racing civilization can be frustrating and drain enthusiasm at warp speed, and many of my play sessions came to a very easy end when this would happen.

The open world is not universally beloved. Structure was very beneficial to the Burnout model, allowing for previous releases to introduce revolutionary racing events unfolding in a carefully balanced playlist. This time around, for example, you can play for hours and never do a Road Rage event, whereas in other titles it would be a refreshing way to break up the straightforward races.

Similarly, events can get repetitive when you find yourself bouncing back and forth across the map between a handful of checkpoints. I already covered getting stuck in an event-free area, but when you piece all of these issues together, each play session will inevitably reach the dreaded “okay, that’s enough for now” moment.

Because all DLC is included at the start of the game, players can very easily grab some of the best cars in the game almost immediately. Sure, take a motorcycle and the DeLorean (Jansen P12 88 Special) out for a quick spin, but try your best to avoid the DLC cars and play the game with the cars you unlock as you progress through the career mode. 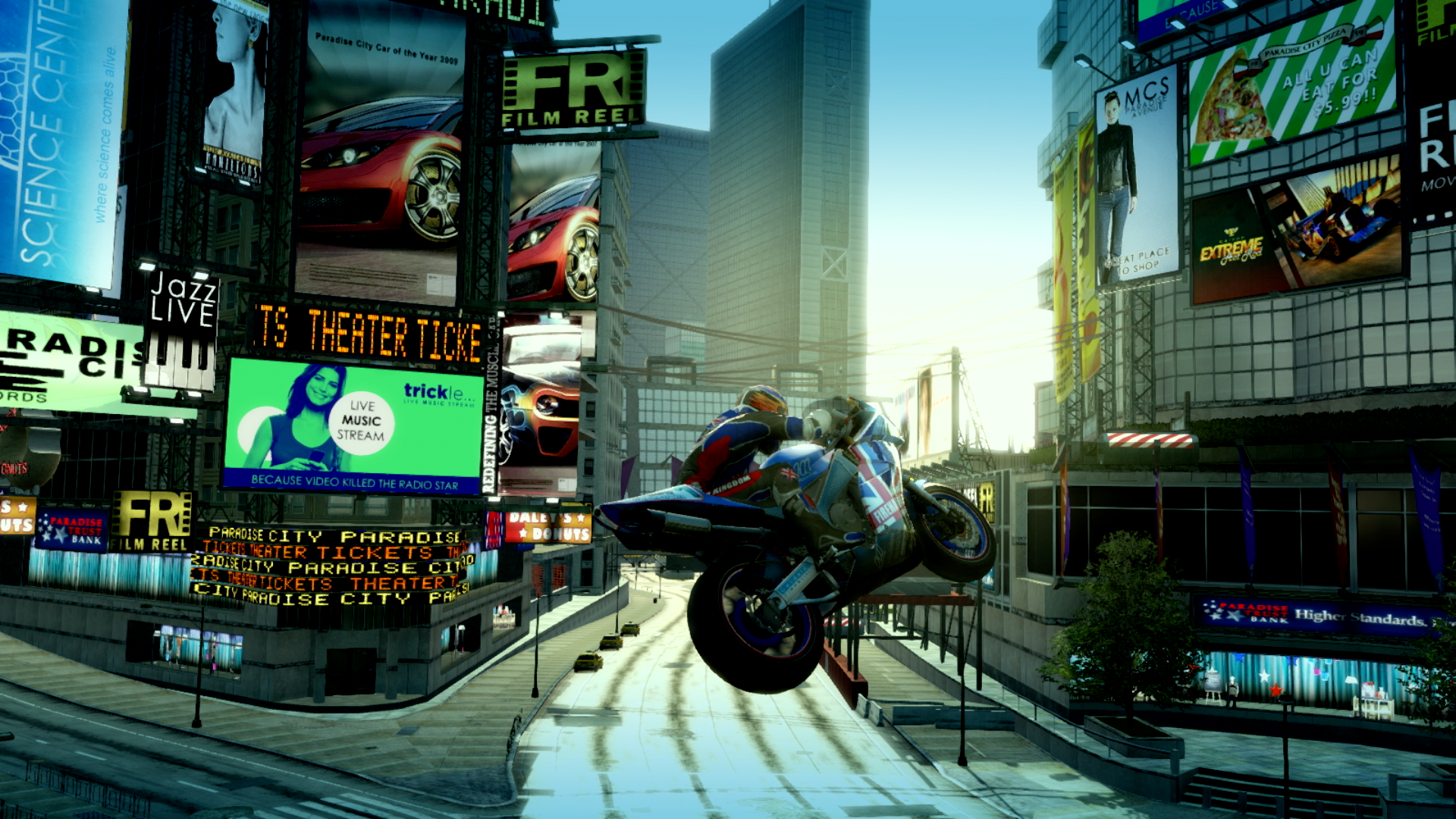 Using the DLC cars without discretion can dilute the joys of and motivation behind career mode, so keep this in mind and proceed with caution.

Wait, How Much Does It Cost?

The following phrase is very commonplace hyperbole, but multiple league sources can confirm that it really happened: my jaw dropped all the way to the floor when I saw the price tag for this game. I was completely convinced that it was a typo when it was announced, but, unfortunately, the $49.99 price tag is very real. Sure, the game is a cult classic, but $49.99 for a re-release of a 2018 remake of a 2008 game is an understandably very prohibitive misstep.

Yes, this is an unfortunate pattern for Switch releases, but at the time of writing, the exact same game is $9.99 on the PlayStation Store and $4.99 on Steam, each on a discount of 50 percent and 75 percent. Not to mention, each of those versions retails for $19.99 when not on sale, which is already under half of the cost of the Switch port. So, how badly do you need it on Switch versus another console? I cannot help but wonder how well it would have sold had EA released it for the Switch at the same time as the console versions, even with (though I do not endorse it by any means) a similarly higher price markup.

Burnout Paradise Remastered is still fantastic even 12 years later. Burnout: Revenge might still be my favorite release in the series, but this is right behind it. Sure, the open world can drag on occasion, but Burnout Paradise Remastered is a tremendous port of what I consider to be one of the greatest racing games of all-time. Experiencing it in handheld form is a wild experience for Burnout veterans, and it opens up a thrilling conversation about potential seventh generation titles to port over to the to Switch.

Readers would be wise to stash this game on their eShop wishlist and hold off until its inevitable sale to avoid the shocking price tag, but make no mistake about it, this is a 60 FPS Burnout Paradise that is worth playing anywhere and everywhere.