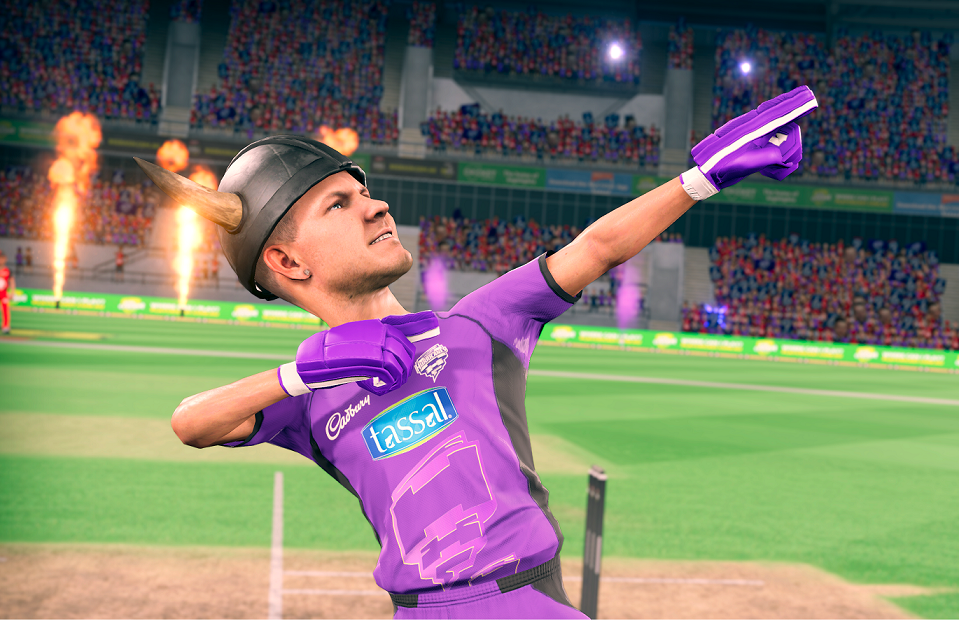 Big Bash Boom (BBB) is the latest cricket game from Australian developer Big Ant Studios. The game is fully licensed and contains all the players, teams and stadiums. It is playable on PS4, Xbox One, PC and Switch. Big Ant’s previous cricketing titles were focused on representing the more intricate details of a very complex sport — and they largely succeeded in doing so. However, BBB does away with pitch conditions, wagon wheels and Test matches. Instead, we get a style more reminiscent of the Big Bash Tournament. The presentation is flashy, the game prioritizes fun over the more dour aspects of realism, and the end result is an enjoyable “pick up and play” cricket game.

(Here is a primer for those new to cricket — feel free to cringe as 132 years of sporting history is crammed into a paragraph. Cricket is played in three main forms. Test cricket is the traditional form of the game that can be played over five days, for seven hours a day, and the match can end in a tie. One-day cricket is a shortened format where teams play over one day, and the team who scores the most runs wins. 20/20 cricket is shortened further still to 20 overs each, and lasts for about three hours. This format is where the crowds and TV revenue are flocking to, and is very popular among younger and casual fans. BBB is a re-creation of 20/20 cricket. The “Big Bash” part of the game’s title refers to the Big Bash Tournament; the Australian domestic men’s and women’s 20/20 competition featuring teams based in the country’s largest cities.

I think the big heads deserve a point all to themselves, and the overall visual style effectively re-creates the flashy and not-very-serious mood of the Big Bash. The goofy team mascots even take part in the coin toss prior to the game. You’ll see fireworks and fluorescent lights go off constantly throughout games. Hit a big six and a glimmering tail will follow the ball’s path that makes it look like a comet is crashing into the crowd  Fire shoots from…fire things, and colored smoke blows out of…colored smoke dispensers(?). Music blares after every big hit and wicket. A giant duck escorts batters into the change room when they fail to score a run. Even the commentary is purposely cheesy. Hit a shot to the boundary, and Pete Lazer exclaims, “He could be a weather presenter — he just delivered the four-cast.” Basically, there is a lot of visual and aural stimuli, and it successfully captures the tone of the Big Bash.

I was expecting an arcade game that would look like cricket, but wouldn’t really feel like cricket. I thought there would be lots of huge hits and big scores, but those events lose their enjoyment when they become easy to perform. The game wants you to play this way; its default difficulty is set to easy and you will be piling up the sixes soon enough. BBB certainly favors that style of play, but I was pleasantly surprised with the amount of depth within the gameplay. A shift to the harder difficulties provides a more competitive balance between bat and ball. (Disclaimer: I am not a stick lord.) On the hard difficulty, I had to use some strategy. Trying to belt every ball into stratosphere was not an option because the timing windows were much tighter. It was no fun being bowled out in six overs.

I began to look for gaps in the field, running quick singles and conserving my lofted shots for the right balls. Not only is timing essential to batting, but so is choosing the right shot, and which foot to play off. Bowling mechanics also have some depth and some skill is required to choose a delivery type — set a moving pitch marker in place and nail the timing marker all at the same time. I was having to “bowl to my field” to halt the flow of runs. This is far from the deepest cricket game on the market, but there are enough layers to make it feel like cricket. And fun. The core gameplay is fun.

With no practice mode, Big Ant has relied on visual cues to teach users about the game. Even established franchises like NBA 2K are wrestling with the balance between showing users how to play the game and cluttering up the screen. To show users what their batting or bowling options are, BBB uses small visual icons formatted to resemble the controller’s button layout. The game shows you the difference between a leg break and a googly, a lofted shot and an advancing hit, a quick delivery and a slower ball. A simple semi circle tells you whether you’re hitting off the front or back foot. Timing circles let you know when to press your chosen stroke, and the flaming (literally) ball confirms you’ve perfectly timed your bowling release.

Whether batting or bowling, a power meter gradually fills up throughout innings. Once activated, you will get a temporary power up. They’re comparable to the “he’s on fire!” mechanic in NBA Jam that offers a short-term performance bonus. There are many types of power ups for batting and bowling teams, with some more useful than others. Batting teams can activate a power up that gives double the runs for a limited amount of time, while bowlers can disable batting teams from hitting the ball in the air; in a close-run chase this may be a little OP (there are others as well). They are well implemented, although one criticism is that they are randomly chosen by the game. A more strategic design would ask the user to choose a “loadout” of three and then allow them to decide which to use when their special meter is full.

Some Shortcomings In Presentation

Some of the best parts of previous cricket games were the instant replays and third umpire reviews. It was always rewarding to see your perfectly timed hook shot come off the middle of bat before departing for the second tier of the MCG, or the nervous wait on a third umpire run out decision review, or trying to figure out why the umpire didn’t agree with your LBW appeal against the computer. These features are not included in the game — probably because they are not suited to the frenetic Big Bash pacing. However, they should be essential in cricket games. Likewise, the occasional scorecard overlay, or a wagon wheel showing which areas of the ground the batters are hitting to should be here. In addition, when you watch a TV broadcast of a team chasing, its target is visually prominent on the TV screen. There will be something like “56 runs off 35 balls” posted on the screen. In BBB, it’s a case of blink and you’ll miss it. The target is in small writing and only appears momentarily under the main scoreboard.

Oh, and please get the wicketkeeper out of the way so we can see the pitch marker when batting. I have enough trouble hitting spinners without being unable to tell which direction the ball is spinning. Yes, I have history with facing spinners in cricket games.

BBB offers three modes: quick matches, online play and tournament play. Some gamers will want more variety outside these basic modes. These don’t have to be full-on franchise modes or card-based modes, but something like a home run derby could have been fun within the tone of BBB — or even something like a longest hit challenge. The game is “pick up and play” so more basic features like these would be ideal for BBB.

The Game’s Unlock System Is Flawed

Players can unlock a wide variety of hats, helmets and celebrations that add to the fun flavor of the game. Also, the developers have not included microtransactions in the game at all (yay!). Players are rewarded with coins (in-game currency) as rewards for performing actions in game. The issue is unlock prices are too high. Unlocks should be coming to the players as quickly as the game moves. But being able to get even one of the cheaper awards can take more than 10 fully completed matches. Don’t make me choose between the Beyonce dance and Dwayne Bravo’s “champion” dance. I want both.

Big Bash Boom is not a cricket simulation. It is not compelling you to think about pitch conditions, when to enforce follow-ons or adverse weather. The game combines a simplified control system with a gameplay style that favors big hitting and fast matches. The festive atmosphere of the Big Bash is not only re-created in game, it’s amplified to 11. Just like 20/20 cricket, BBB lacks depth but provides enough enjoyment to compensate. Fans of five-day cricket can look to the other Big Ant games for their simulation fix, but Big Bash fans can assume they will get enjoyment from this game. Also, fans new to cricket should start out here.

And just to confirm, yes, it has big heads.