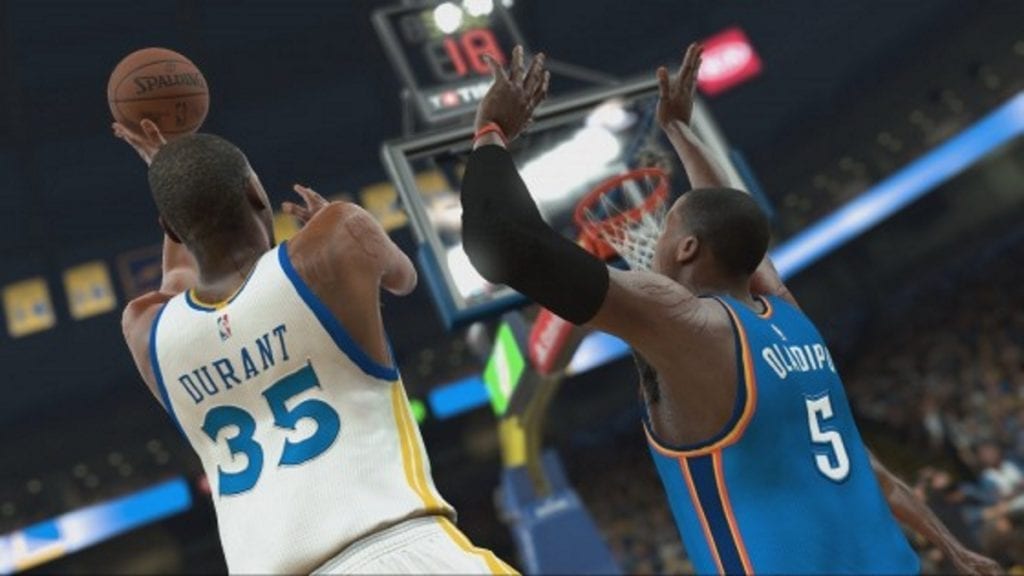 When Kevin Durant announced he was signing with the Golden State Warriors, it turned the NBA world upside down. Fresh off a season where they set the NBA single-season wins record, had the first unanimous MVP and came within a Kyrie and Iguodala of winning back-to-back titles, the Warriors went ahead and added a former MVP and one of the most dynamic scorers to ever play the game. The move was universally regarded as one of, if not the most significant, free-agent signings of all time — all but guaranteeing the Warriors the 2017 NBA title.

For video game fans, KD to the Warriors affected something even greater: NBA 2K. In NBA 2K16, the Warriors were already borderline unfair to use. With Steph and Klay, arguably the two best shooters of all time, alongside Draymond Green, the proverbial NBA Swiss army knife, anyone who ran with the Warriors in 2K16 had a clear statistical advantage over their opponent (especially after some late patches).

Well, if using the Warriors in 2K16 was unfair, then using them in 2K17 borders on criminality. Aside from the obvious — replacing Harrison Barnes with Kevin Durant — the rest of the roster isn’t too shabby. While it’s true that the real-life Warriors have yet to set the world on fire like we all thought they would, the video game Warriors don’t have the same problems.

The Warriors may be struggling with defense, defensive rebounding, and even shooting(!) to some extent, it’s much easier for the video game player to quickly adjust to the new roster than it is in real life. And yes, while it’s clear that Oakland misses Andrew Bogut much more than any of us anticipated, the drop-off between Bogut and Zaza Pachulia is much less significant in the virtual basketball world.

The fact of the matter is that the Golden State Warriors are an actual basketball team that you will encounter at some point while playing 2K17. The question is which teams give you the best shot at the ultimate upset? Let’s consider both current and historical teams, using two examples from each category: one obvious and one less obvious.

Hey, I said one would be obvious, didn’t I? And it really doesn’t get more obvious than the team who came back from being down 3-1 against the Warriors in the Finals last year. There is no current team, in real life or 2K, that is better equipped to challenge the Warriors than the Cavs. They have the best player in the world, LeBron James, whose dominance also translates to the 2K world where he is almost unstoppable driving through the lane.

Kyrie Irving is one of the best young point guards in the game today. He’s one of the better ball handlers in the league, which you can use to your advantage to keep the defense on its heels since everyone also has to respect his three-point shot. Kevin Love rounds out their Big Three, giving you a core piece down low who is a beast on the boards with a deadly inside-outside game. The Cavs are your best bet to beating the Warriors in 2K17.

And for our less obvious team, Portland doesn’t give you as good a shot as Cleveland does, but the Blazers are another great option. They don’t have the Big Three that Cleveland has, but Damian Lillard is one of the most exciting players in the league today and also one of the most fun to use in 2K17. Yes, he is a liability on defense, but there aren’t many better than Dame with the ball on offense. Other than Steph, no one is better at nailing off-balance, off-the-dribble threes in the defender’s face.

CJ McCollum is a mini-Dame in his own right, even if he is less dynamic on offense. But he can fill up the stat sheet quick and is the other half of a great backcourt tandem to face-off with the Splash Brothers (he’s also arguably easier to shoot with than Klay Thompson in the game). The Blazers don’t have any stars at center to tip the scale either, but they do have solid pieces in Mason Plumlee, Meyers Leonard and former Warrior Festus Ezeli (a much better virtual player than actual player at this point as his legs seem to be failing him). And they also have a clear advantage in the depth department. It’s absolutely an uphill battle, but the Blazers will give you a fighting chance against the Warriors.

I’m not saying that using a team that features LeBron James is your only shot against the Warriors, but it’s definitely your best shot. In terms of the modern NBA and video game basketball in general, I’d slot the current Cavs team over the 12-13 Heat, but just barely. This Heat team features the original Big Three in all their prime glory: LeBron James, Dwyane Wade and Chris Bosh. The depth beyond those three isn’t great, but when you have three future Hall of Famers on your squad, you’ll always have a legitimate shot. Mike Miller, Ray Allen (HOFer number four), and Mario Chalmers provide some much needed outside shooting help as well.

Of all the teams discussed here, this squad is by far the shallowest. There isn’t much of a bench to speak of, so you’ll have to run your starters for heavy minutes and avoid foul trouble. But would you look at this starting lineup? Penny, Nick Anderson, Dennis Scott, Horace Grant and a young Shaquille O’Neal. This starting group could give the Warriors fits on many levels. Shaq would dominate the Dubs’ glaring weakness: interior defense. Penny wasn’t known as a great outside shooter — that’s why you have Anderson and Scott — but his size and ability to drive the lane would create some serious matchup problems as Klay Thompson or Andre Iguodala would have to guard him. If you can compensate for the weak bench, the Magic would be a fun group to use against Golden State.

What about you? What teams have you have you had success with against the Warriors in 2K17? Let us know in the comments.