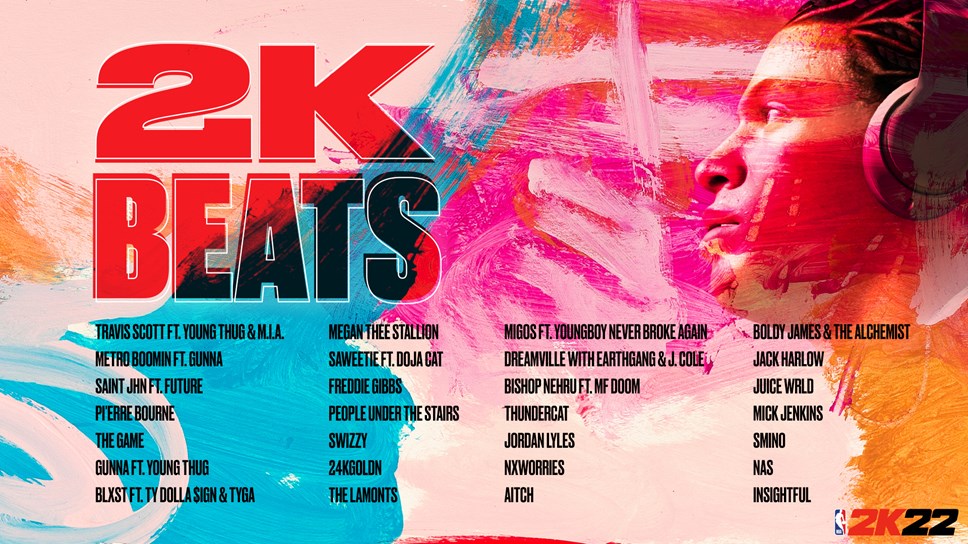 2K has announced some of the artists featured in the NBA 2K22 soundtrack, including Freddie Gibbs, Gunna, Megan Thee Stallion, Metro Boomin, Travis Scott and more.

The in-game soundtracks will be updated seasonally throughout the year with 2K’s all-new integration system. This allows for early access to unreleased tracks, new artists, and opportunities for fans to become part of the experience.

Players will be able to discover music throughout the year via “First Fridays,” where new songs will be added to the soundtrack on the first Friday of every new Season. Each update will feature a mix of high-profile and up-and-coming artists to support music discovery and growth within NBA 2K22. More details on what will be included in each Season will be shared later in August.

This year also introduces brand-new ways for aspiring artists to become a part of the NBA 2K series music experience. The all-new Producer Series will integrate a Beats Pack into the game and create an opportunity for the community to record their best verses over the beats and showcase their talent. More details on the Producer Series and even more ways aspiring artists can be involved in the NBA 2K soundtrack which will be unveiled closer to launch.

Some of the new features for NBA 2K22 were revealed last month. Make sure to catch up here if you missed out.

Key on-court gameplay improvements are being implemented to give the player not only more control over how they score the ball, but also how they counter those moves on the defensive end. That’s only the beginning. More impactful gameplay changes will be introduced along with the first NBA 2K22 Gameplay Reveal trailer coming out later this month.

NBA 2K22 releases on September 10 for PlayStation 4 and PlayStation 5, Xbox One and Xbox Series X|S, Nintendo Switch, and PC platforms.