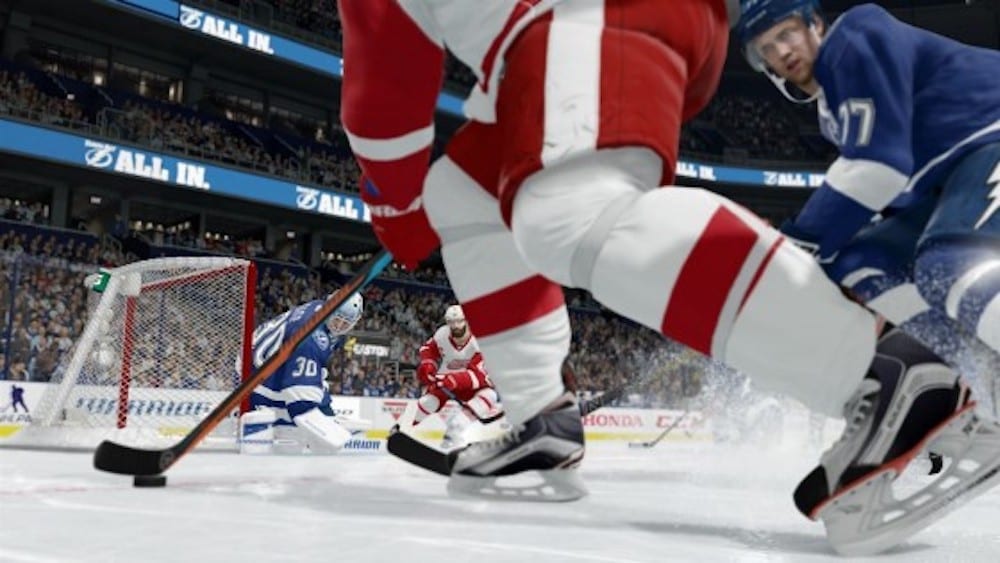 Chris Sanner: Hey hey Operation Sports!  Today I’m sitting down, virtually, with Fraser Gilbert — the man who reviewed NHL 17 here on OS. We’re going to talk about his review, about the game, and how it stacks up this year. First thing first Mr. Gilbert: Any regrets on your review score yet?

Fraser Gilbert: No, I don’t have any regrets. It’s a great game — one that is on the verge of something particularly special. It isn’t quite there yet, but it’s still a great experience.

Chris Sanner: By not being there quite yet, what are biggest things you think holding NHL back at this point?

Fraser Gilbert: It’s a combination of things. There are a few too many lingering issues that have plagued this series for a while. It’s very evident that EA has put a lot of work into eradicating them as much as possible, but they haven’t totally disappeared. Ultimately,  much of the disappointment stems from a few minor faults that merge together to create a frustrating on-ice experience on an occasional basis. Also, I hate to criticize something for being too similar when it was already very good in the first place.  But, there’s such a sense of familiarity (particularly in the presentation department) that it just feels a little ‘been there, done that’ at times.

Chris Sanner: Yeah, in a way, sports games seem to suffer from that more than most other games. Maybe its the source material, but it seems like for whatever reason some games just don’t change much from year to year.

With that said, if you are like me — who hasn’t played much NHL the past couple of years — what could someone who is coming to the series for the first time on next-gen expect versus what they had on the previous generation of consoles?

Fraser Gilbert: Right. There’s nothing overly bad about familiarity. This series doesn’t need any unwelcome gimmicks that divert the experience away from a simulation feel, but it needs something to grab hold of those who are on the fence and really force them to part with their $60.  I’m not sure they found that this year — I’m not even sure they were looking for it. It’s a year of refinement, and that’s perfectly OK under the circumstances. Next year might be the big one.

(Sorry I went off track)

Chris Sanner: Let the record be known Fraser has gone off the rails.

Fraser Gilbert: That happened a long time ago. Anyway…onto my next reponse

If NHL 17 is your first foray into the world of current-gen hockey, you’ll notice plenty of differences. What to expect? More authenticity in the gameplay department, a greater focus on realistic presentation aspects, and this year in particular — lots of in-depth modes. The past few years have been difficult for this series at times, but its new-found stability makes it a great time to jump in.

Chris Sanner: What about the gameplay? I know there are some faults…but what does NHL do particularly well right now on the ice?

Fraser Gilbert: It simply does a great job of recreating the sport from a sim perspective. Players feel much weightier this year, which makes the game feel more realistic and allows individual player traits to shine more prominently than they did before. It doesn’t cater as much to the danglers and pace abusers of years-gone-by, either. It’s now more of a strategic affair that rewards intelligent puck cycling and smart tactics. I still felt that way last year, but it’s more notable this time around.

Chris Sanner: Do you think the game appeals to casual to hardcore hockey fans?

Or does it endear itself to one crowd over another?

Fraser Gilbert: Well, you said yourself that you haven’t played much NHL in the past few years. Would you consider yourself a casual fan? What do you want out of a hockey game?

Chris Sanner: That’s a good point. I’m definitely a casual fan. In that vein I’d like to think there’s a hockey game out there that would be deep enough to allow me to learn the sport more but accessible enough I can actually pick it up and play and not feel like I’m completely lost on the ice from the get go.

Personally think that is a big problem in sports gaming for more casual people (not knowing how the game works) — so what say you? Could I pick up the game on a lower difficulty and not feel like a moron as the Dallas Stars beat me 7-1?

Fraser Gilbert: I think so, but there’s a few quirks you’d have to get used to. There’s definitely a lot of tools to try and help casual fans around the game. I can’t praise this year’s On-Ice Trainer tool enough — I haven’t turned it off yet. It’s great for both casual and hardcore fans to learn what they’re doing right and wrong. Be A Pro feedback tells you what you’re doing well (even if it isn’t totally accurate), and Franchise Mode offers the ability to play a season without any of the bells and whistles that a non-hockey fan might not care about.

So, there’s plenty of assistance available. This year’s game doesn’t necessarily cater to the casual gamer from an on-ice perspective due to its unforgiving levels of puck control, but there are a vast number of sliders you could alter to craft the experience you want. You’d probably feel like a moron for losing, but there’s enough in-game support to encourage you to have one more go.

Chris Sanner: Ok on the modes, what do you think stands out most this year versus previous NHL games?

Fraser Gilbert: It’s my belief that next year will be a big year for this series. Will we see the incorporation of the Frostbite Engine? It could be a game-changer. Ultimately, I don’t know where its long-term future lies. I’m just excited to see how it pans out.

Chris Sanner: Thanks for taking the time to talk today Fraser. I know you’re huddled up in the dark as the storm of the century batters at your modest shack on the coastline across the pond.

Stay warm, and don’t go swimming for a couple of days.

Fraser Gilbert: Yes, I’m the British stereotype. I drink tea, have dinner with the queen and live in a countryside mansion. Oh, and I speak funny, too.

But I’ll just stay indoors and play some NHL 17. It’s for the best.