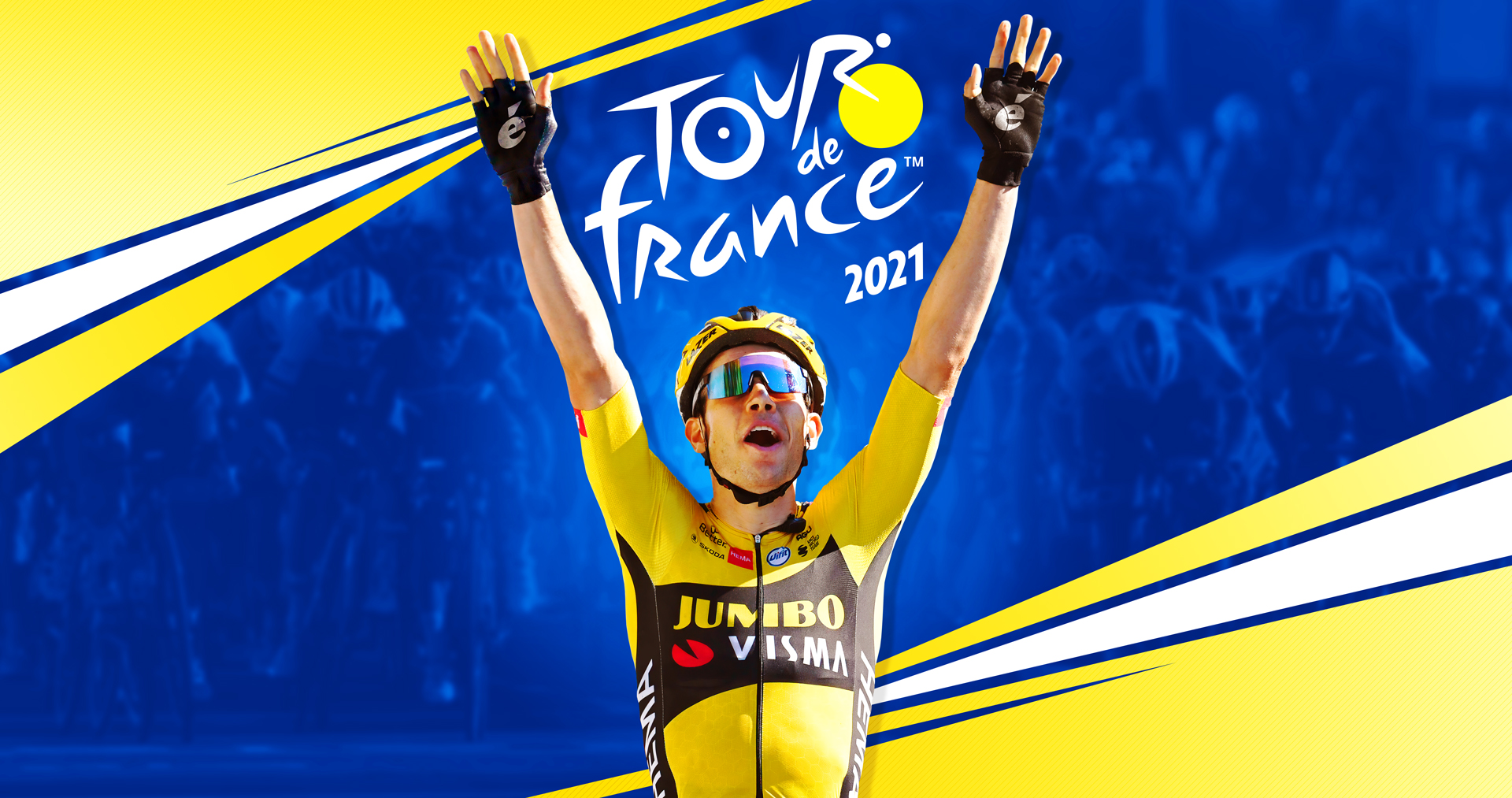 If you’re a fan of a sport, then the best you can hope for from a video game representation of said sport is that it captures all of the intricacies of the sport in a way that’s both realistic and fun. Anyone who appreciates all of the finer details that help separate the great athletes from the lesser ones are going to want a video game to effectively replicate all of the maneuvers and strategies that play a huge part in keeping the elite in front of the pack so that the people at home with a controller in their hands can feel as if they’re using their own expertise of the sport to flourish.

But what about people who aren’t necessarily fans of the sport? Because sports video games have the ability to draw in new fans to any given sport, there should at least be some attempt to make a game accessible to an audience who doesn’t understand as much about the sport in question, and perhaps even teach people about what it actually takes to succeed at that activity. In turn, hopefully this gets them to learn to love the sport as well and makes them a fan. 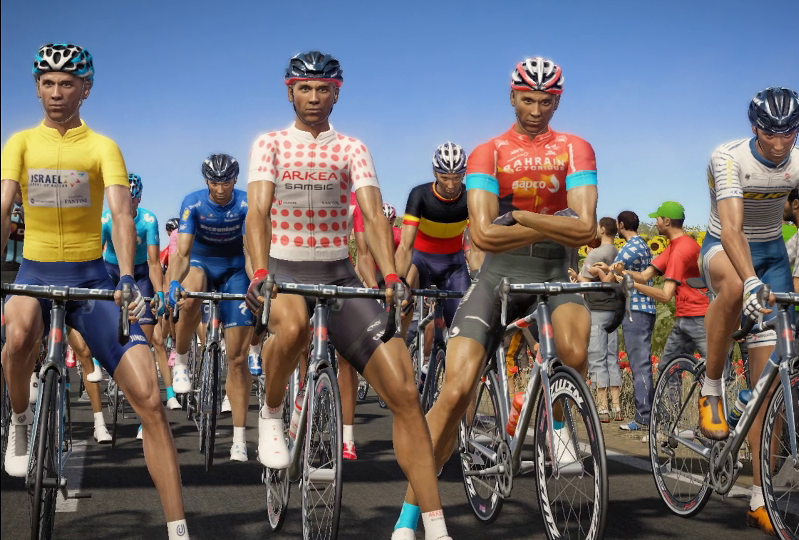 This was my hope with Tour de France 2021, the latest entry in a series by developer Cyanide and publisher Nacon that I had never played before. It is billed as a simulation of cycling, a sport that I admittedly didn’t know a whole lot about before delving into the title. Of course, I have an awareness and a basic understanding of both the sport itself and the Tour de France event, but I’ve never been interested enough in cycling to find out about how somebody (or a team of riders) endures long grueling courses over a number of stages, some of which involve climbing steep hills that are pretty much designed to wear you out.

As a game for newcomers to the sport of cycling like myself, Tour de France 2021 does a commendable job of teaching the basics to the uninitiated, though it does eventually become somewhat overwhelming to grasp all of the different mechanics in the game and when exactly to best employ these in the heat of a race. Despite not always completely knowing what I was doing, competing in events still maintains some appeal thanks to the decent graphics and physics that help transport you enough that you can almost feel the wind on your face when you’re bombing down a hill.

Regardless, be prepared to devote a fair amount of time to each race — unless you want to risk losing ground by fast forwarding through parts of it — because these events are definitely more marathon than sprint for the most part.

Those long rides give me plenty of time to consider what parts of the game make it worthy of a spot on the podium, and what other aspects are holding the game back from reaching the finishing line. Let’s explore those highs and lows further to help determine whether Tour de France 2021 can break out of the pack in this review. 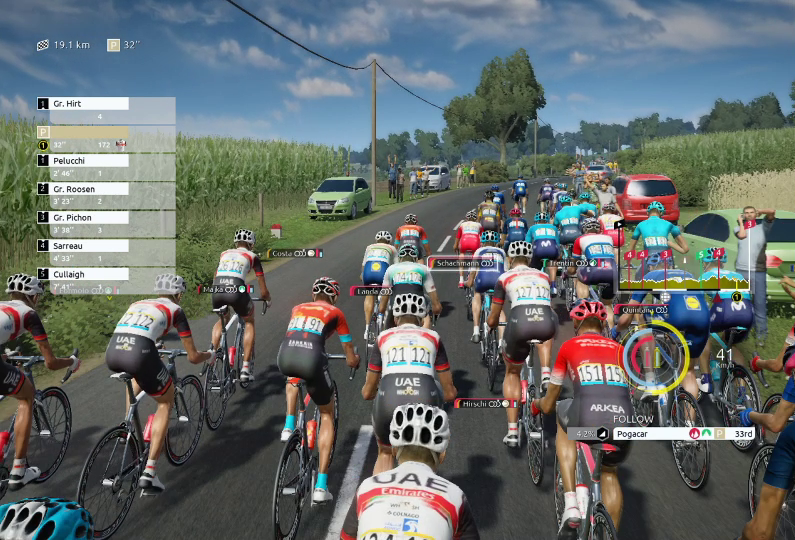 Tour de France 2021 has the kind of tutorials that are extremely helpful in terms of teaching you how to play the game and ride your bike during a race. But the more you learn, the more you become intimidated by the sheer number of controls that you need to know how to use during a race. It’s simple enough when it comes to knowing how to pedal and brake, but it gets complicated quickly when trying to figure out how to properly adjust your effort level to ensure that you don’t have a “blow out” by exerting too much energy, which will then cause you to lose speed for a period of time until you recover.

In fact, monitoring your energy is probably the most important aspect of the game, with two separate energy gauges that represent both how much you have left in the tank for a short-term energy burst and the reserve that you need  for the long haul.

Though that alone can be difficult to negotiate during a race, you’ll also need to know when to attack by pedaling your hardest (again, be careful to not do this for too long or you’ll have a blow out), when to follow behind a teammate or opponent to coast off the draft to conserve energy, and when to communicate with your teammates or even take control of a teammate when necessary. If you think that sounds like plenty to keep in mind while racing, there’s still more at your disposal, including two feeds that you can drain to help recover your energy, which as far as I can tell involves your rider drinking or eating something while cycling (insert obligatory cycling steroids joke here).

As with most games, all of this does get a little easier to handle the more you use the controls and understand what everything does. Still, be prepared for that to take some time, especially if this is your first time playing a Tour de France game, and you happen to be not all that familiar with cycling in general. But it’s always better to have too much nuance to the controls rather than not enough, so it’s hard to complain a lot about the game giving you plenty to think about on your bike. It’s also bound to be especially appreciated by hardcore fans of the sport who want to see all of the strategies utilized by real professional riders also in effect in a video game. 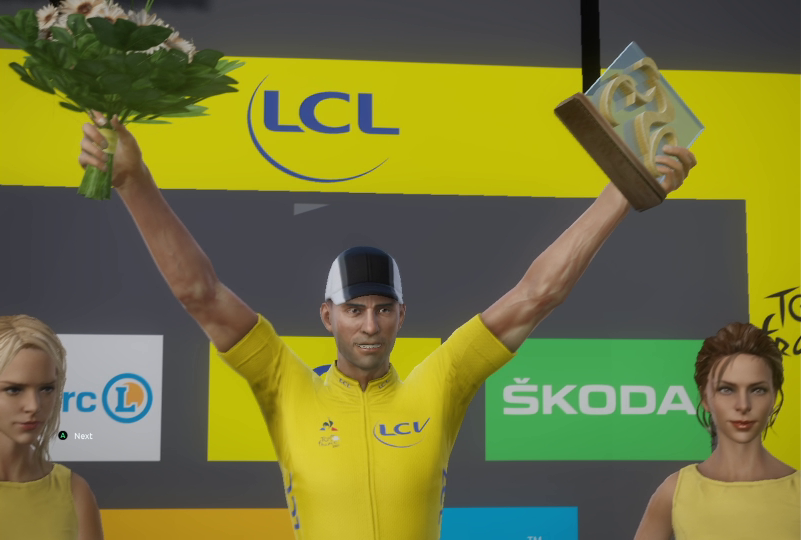 While Tour de France 2021 may lack some of the polished sheen of a AAA sports title, the visuals still hold up fairly well compared to those other games with higher budgets. It’s particularly impressive when you have a group of cyclists riding together during stretches, as races can have up to 150 competitors, and there aren’t any noticeable issues with stuttering or any other graphical issues to distract from trying to keep pace with others.

Granted, there isn’t a whole lot to differentiate any of the riders from each other besides their unique team attire, but that’s not all that different from real life because of how everyone involved is often in similarly peak condition when they ride. Besides the cyclists themselves, you’ll also see groups of spectators congregating throughout courses, sometimes even annoyingly wandering on to the road in front of you and forcing you to go around them (yes, that feels especially true to life right now).

The pre-race and post-race sequences aren’t long or overly involved, but they do go a long way towards setting the scene in advance of races and then capturing the excitement on the podium afterwards. Unfortunately, these podium moments do lack a little bit of clarity, and the blurriness of them makes them feel somewhat behind the times.

Simply put, there are a lot of of ways to race and customize the experience depending on your own preferences. Naturally, the big draw of the game is being able to play through all of the stages of the Tour de France (that is the name of the game after all), but there are other real races included in the game as well. You can even build your own races by selecting individual stages that you wish to include in events and curate the kind of experience that you would like to see from the sport.

There are also a couple of different career modes within the game for those looking to see some progression from race to race, as you can either create a team and recruit riders to that team, or make your own rider and try to take that rider all the way to the top of the cycling world. These may not have quite the depth of some similar modes you find in larger games, but there are objectives that you need to complete throughout your career in order to see improvement, and it’s all more than enough to scratch that particular itch for those who want to feel like each race is part of a larger picture. 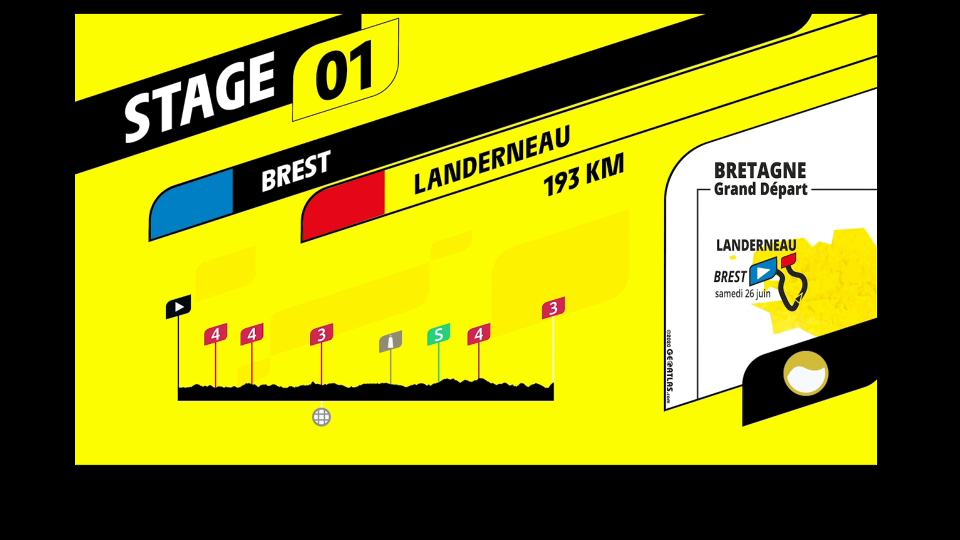 Though it’s understood that the stages in events like the Tour de France are designed to be debilitating marathons that require an inordinate amount of endurance to complete, that doesn’t necessarily mean that races within the video game need to take nearly as much time as they do in real life. As it stands, it’s not uncommon for stages in Tour de France 2021 that are typically around 140-190 kilometers to take around an hour to finish, should you be committed to playing the entire event and making every single turn and decision along the route. Thankfully, the game does offer you the chance to fast forward through any part of the race that you want, which will come in handy should you just want to maybe skip to the crucial final 20 kilometers or so while still feeling like you’ve played a key role in the outcome.

It would perhaps be a good idea for the developers to consider some way of truncating the entire experience of a race so that you can avoid fast forwarding at all and not have the CPU take over for those stretches. It seems like an option could be implemented that allows you to zoom through the necessary distances of a race more quickly while still maintaining control throughout. There’s no reason why this couldn’t cut down the length of races, and that would allow people to feel like they aren’t relying on AI or devoting quite so much time to stretches that don’t materially impact the outcome. 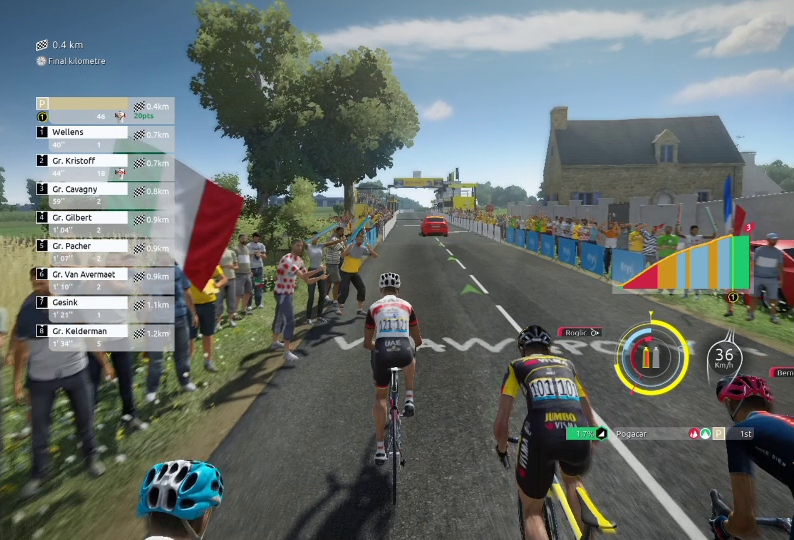 If you’re like me, it won’t take long for the sounds of all of the spectators that you pass shouting their encouragement at you to get on your nerves and make you decide to maybe listen to some music or a podcast while you play the game. It’s not as if you’ll be missing any fantastic sound effects or event atmosphere by doing this, and you can instead just imagine people yelling phrases in French like “plus vite!” and “allez les gars” rather than hear them over and over again.

Furthermore, there are some audio updates during races that are intended to be a play-by-play announcer or perhaps a team representative sharing observations or helpful hints you can use to your advantage. However, none of these are all that insightful anyway, and they also become repetitive and tedious before too long.

Perhaps it’s too much to expect that a niche cycling game like Tour de France 2021 would have some sort of online play because matchmaking and connecting with many people would understandably be difficult, but the lack of competing against other real humans within the game is still felt. I would not expect to race against 150 other people, but competing against something like 12 other folks over shorter distances just to get a taste of the online competition would have been nice.

It’s easy to imagine Tour de France 2021 satisfying fans of cycling who are seeking a video game experience that mirrors the sport they love as closely as possible, but the fact is that the game will likely be a tricky one to pick up for any neophytes like myself. Although the tutorials do what they can to walk you through the basics, the learning curve is as steep as some of the hills you’ll be forced to ascend during races, and that might be enough to keep you from playing the game all that much. But for those willing to put in the time and effort, there’s certainly some enjoyment and satisfaction to be had from learning how to navigate all the curves of the road and become leader of the pack. The game might not be ready to claim any yellow jerseys just yet, but its not all that far off the winning pace either.