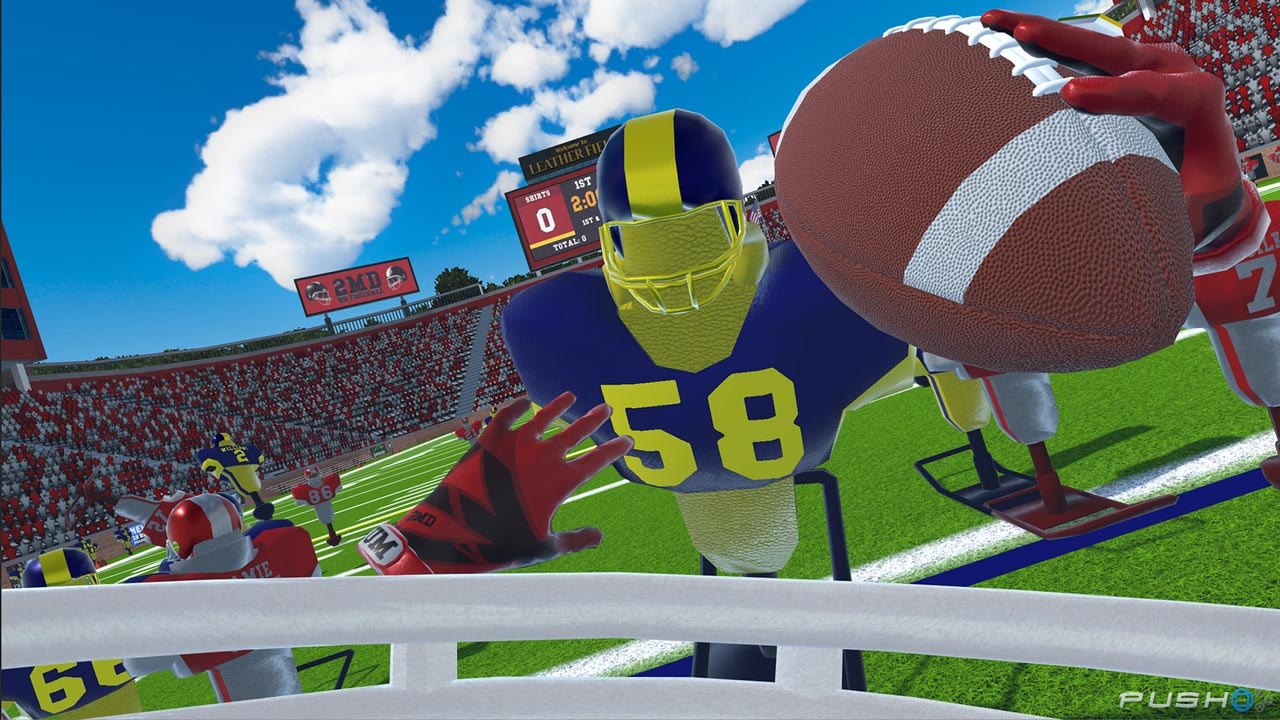 When it comes to football video games, there’s an ominous shadow that so clearly looms large over every other title. With EA having a clear advantage in resources that allows it to outspend all of the smaller developers who are already desperately trying to catch up to an established franchise, it’s hard for anyone else to really compete with Madden. Perhaps that’s why a game like 2MD VR Football has flown under the radar for so long. By utilizing the PSVR’s motion-tracking technology to focus solely on putting you in the shoes of the quarterback, the reason it succeeds so admirably is because it’s able to accomplish a number of things that even a giant in the industry like Madden isn’t able to deliver.

One of the best things about 2MD VR Football, oddly enough, is that it’s not interested in trying to provide a full football simulation. With Madden having a firm stranglehold on that territory, 2MD doesn’t even bother having you play any defense at all. In fact, the only thing you have to worry about when playing the game is lining up behind center, finding open receivers and then slinging the ball to them as best as you can. By limiting the scope of the game in this fashion and honing in on the most important and, let’s face it, probably the most fun part of football, 2MD is able to transform its potential limitations into a strength instead.

The objective in 2MD is a pretty simple two-minute drill — lead your team down the field for a touchdown before time expires. Achieving this goal will then see you trying to score in subsequent games against tougher teams, until you’ll eventually be tasked with having to score twice within the allotted time period. If you throw an interception, you’ll have to start your drive over, and if you throw enough of them it’s game over. You’ll also have to worry about making first downs, as failing to make 10 yards within four downs will also force you to begin your touchdown drive again.

In order to move down the field, you’ll have to make consistently good throws. Fortunately, the motion-tracking VR is pretty good at translating your arm movements and release points into something resembling how it feels to throw an actual football. It’s especially effective on bullet passes, where bringing your arm forward quickly leads to the necessary zip that’s required on some passes to squeeze the ball into tight spots or hit a receiver perfectly in stride over the middle. Putting some air under the ball and being able to drop a deep dime perfectly over a receiver’s shoulder is a little more finicky and takes plenty of practice to master.

It’s probably a good time to talk about the receivers, they’re dummies. No, quite literally, they are tackling dummies that glide across the field as they run assigned routes. However, don’t let the fact that they don’t have actual hands (or feet) make you think that they can’t catch the ball. As you long as you throw a pass somewhere in their vicinity, these dummies will do their best to get to the ball and have it stick to them. They’re especially good at corralling low passes, but aren’t able to jump for passes over their heads, so it’s generally best to be low rather than high with your throws. It’s also surprising to find that these dummies can really rack up the RAC yards, with a short pass over the middle liable to end up going to the house if everything breaks just right.

For years, Madden players have been clamoring for the ability to really go deep as a coach and get the opportunity design their own plays. 2MD VR Football allows you to do just that, with the chance to game-plan at a dry-erase board before hitting the field and facing the opposition. You can craft up to eight plays by moving around your receivers in the formation and drawing out their routes with a marker. By combining slants, hitches, crosses and go routes within your plays, it’s immensely fun and rewarding to see your plays work to perfection during games.

There are times when everything is going right that it will seem like some of the “money” plays you’ve designed couldn’t possibly fail. But while your receivers may come open regularly on certain plays, it’s important to realize that you still have to make good throws to those open guys. Also, designing effective plays can be easier than it looks. If you draw a slant route that is just slightly off how you want it to be run, for example, be prepared to get plenty frustrated when your receiver isn’t where you expect him to be time and time again. And don’t be afraid to have a go-to running play for when it’s third or fourth and short and you desperately need to move the sticks. Speaking of which…

There will be times, just as in real football, when you can’t find a receiver open and you can sense the protection around you starting to break down, so the only option will be trying to pick up some yards with your feet. 2MD VR Football allows you to use the icon buttons on your Move controller to move around in different directions, making scrambling an integral part of the game. You can take off right up the middle if there’s a hole there or try a bootleg to the outside to pick up some yards and make something out of the play. Defenders will be in hot pursuit, but just because they can catch you doesn’t necessarily mean they can tackle you. One really enjoyable part of running with the football is being able to use your free hand to stiff arm oncoming tacklers and pick up some extra yardage.

But it’s important to at least be a little bit patient with the football and not look to take off immediately without keeping your eyes downfield to give a receiver an opportunity to make a play on the ball, as it’s not as if running the ball is a surefire way to pick up easy yards. Just as often as you find some open field to run through, there will be times where you’re not even able to get back to the line of scrimmage before a defender has pounced on you and dropped you to the ground. The best scenarios to abandon the play and improvise with your legs are ones in which all or most of your receivers are running deep routes and taking their defenders with them, leaving the middle of the field wide open for you to take advantage.

Sometimes you may just want to test your skills without playing in games of any consequence, or perhaps you just feel like throwing a football by yourself for a little while but would rather not go outside and have to keep running after the ball to pick it up. For these purposes, 2MD has a practice mode that challenges you to throw the ball through a bunch of different hoops of varying distances. It’s a neat way to get you accustomed to how the mechanics of throwing work, and will also allow you to experiment with different release points and arm angles (if you want to try out a sidearm throwing style, for instance).

The bonus rounds that you unlock by completing each game are bound to look pretty familiar to anyone who’s spent time in the practice mode. Fresh off leading your team to victory, you can revel in your success as you earn points by throwing the ball through hoops and hitting moving receivers. It’s not quite as relaxed as the practice area, but it’s also not exactly high pressure to try and put a cherry on top of your victory by raising your overall score a little higher with a good performance in the bonus round.

It’s not as if there aren’t any competitors to Madden’s crown, but titles like Doug Fluties’s Maximum Football are a metaphorical David trying to go toe-to-toe with Madden’s Goliath while being armed with little more than enough resources to brandish a slingshot. Instead of trying to beat Madden at its own simulation game, it would seem a better plan of attack would be to try to differentiate that franchise as much as possible. A game like Mutant Football League, for instance, at least has enough of a grotesque and gruesome slant to make it stand apart from Madden, even though it’s still a football game at heart.

The same goes for 2MD VR Football. It recognizes that the innovative power of virtual reality and how it’s able to re-create the unique sensation of playing quarterback is enough of an experience on its own to be the entire game. Instead of looking at the problem of how to compete with venerable titans like Madden by asking how they can do things better than EA’s juggernaut, games like 2MD VR Football succeed by asking how they can do things differently than Madden. By doing this, it stakes out its own separate football niche that Madden won’t even attempt to invade.